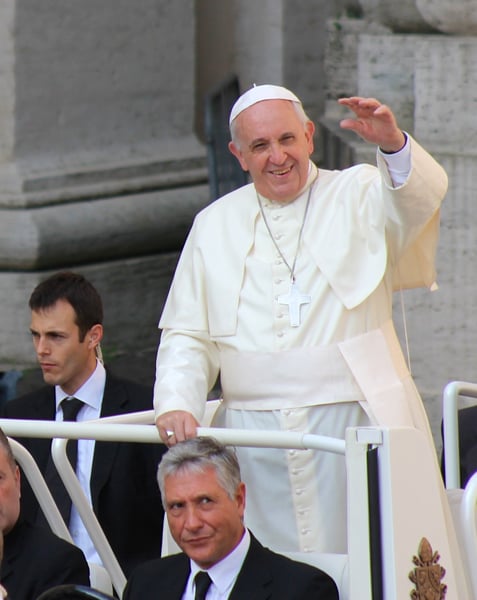 (RNS) Speaking out on one of the most contentious issues of his papacy, Pope Francis on Wednesday (Aug. 5) issued a powerful call for the church to embrace Catholics who have divorced and remarried, telling a gathering at the Vatican that such couples “are not excommunicated, and they absolutely must not be treated that way!”

“They always belong to the church,” he added, calling on pastors to welcome Catholics who have remarried without an annulment, even though such Catholics are currently barred in most cases from receiving the Eucharist, the central sacrament of the faith.

“The church is called to be always the open house of the Father. … No closed doors! No closed doors!” Francis told the crowd at his weekly public audience, which resumed after a monthlong summer break.

The pope’s words were greeted with what was described as thunderous applause.

Since he was elected in 2013, Francis has said that the church must be more merciful and open, and he has encouraged debate on changing pastoral practices to allow, for example, divorced and remarried Catholics to take Communion.

Current teaching says such Catholics cannot receive communion unless they abstain from sexual relations because their first marriage is still valid in the eyes of the church.

The issue was one of several that inflamed unusually public debates at a major Vatican summit of bishops the pope convened last October, and the arguments — including how to welcome gay couples and those who are cohabiting — have continued to engage top churchmen in pointed exchanges ahead of a follow-up summit, called a synod, set for October.

Many Vatican observers believe Francis wants some concrete change, which his foes believe would be tantamount to heresy because it would undermine Jesus’ teaching on the indissolubility of marriage.

The issue of how to treat divorced and remarried Catholics is one of many the bishops will debate, but it is a widespread pastoral problem and has come to stand for the bigger question of how, and even whether, the Catholic Church can change.

Although Catholics divorce at somewhat lower rates than the general population, there are an estimated 4.5 million divorced and remarried Catholics in the U.S. who have not received an annulment.

Francis himself has not endorsed any particular proposal, and in focusing on the topic on Wednesday he reiterated that “there is no easy solution for these situations.”

But he made it clear that he wanted the Catholic Church to take a more open approach.

“For how can we encourage these parents to raise their children in the Christian life, to give them an example of Christian faith, if we keep them at arm’s length?

“If we look at these new bonds (of remarried Catholics) with the eyes of small children — and the children do watch,” he said, “we see once again the urgency of developing in our communities a real welcome for people in such situations.”

The children are the ones who suffer most when their parents are shunned, Francis said.

How can the church “tell these parents to do everything to raise their children as Christians, giving them an example of a firm and practiced faith, if we keep them at arm’s length from the community, as if they were excommunicated?”

The church, he concluded, “must do everything not to add further burdens to those that children in these situations must already bear!”