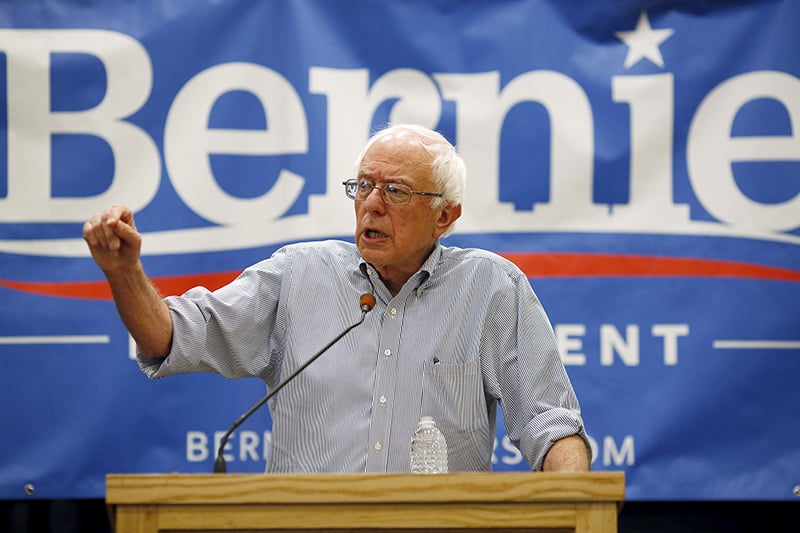 Vermont Sen. and U.S. Democratic presidential candidate Bernie Sanders speaks at a campaign town hall in Manchester, N.H., on Aug. 1, 2015. Photo courtesy of REUTERS/Dominick Reuter
*Editors: This photo may only be republished with RNS-SANDERS-LIBERTY, originally transmitted on Aug. 6, 2015.

(RNS) The eyes of the political world are focused on Thursday night’s premiere of the reality show known as the first Republican presidential debate, where a pack of contenders — 10 in the main event and at least a half-dozen relegated to an undercard — will each try to stand out.

It won’t be easy, in part because all of them are Christian conservatives who are not shy about proclaiming their faith as a selling point for their candidacies, and all tend to agree on issues related to their beliefs: opposing abortion and gay marriage, for example, and promoting religious freedom and battling radical Islam.

But a more intriguing, if not entertaining (really, who can compete with Donald Trump?) interplay between faith and politics has been announced for next month, when Sen. Bernie Sanders, a democratic socialist and secular Jew — and a candidate for the Democratic presidential nomination — speaks at Liberty University. 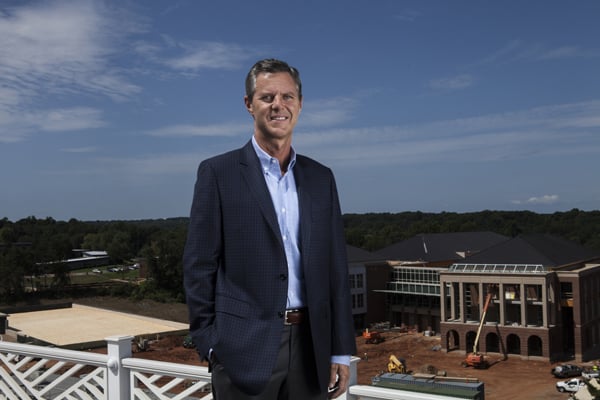 The huge Lynchburg, Va., campus was started by Jerry Falwell, founder of the Moral Majority, one of the main engines behind the launch of the religious right. The university is currently headed by Falwell’s son Jerry Falwell Jr.

So why did Sanders, the independent senator from Vermont, accept Falwell’s invitation to address upward of 12,000 students and faculty on Sept. 14? And at the start of the High Holidays, the most sacred stretch on the Jewish calendar?

“It goes without saying that my views on many issues — women’s rights, gay rights, education and many other issues — are very different from the opinions of some in the Liberty University community,” Sanders said in a statement.

But, he continued: “I think it is important, however, to see if we can reach consensus regarding the grotesque level of income and wealth inequality in our country, about the collapse of the middle class, about the high level of childhood poverty, about climate change and other issues.

“It is very easy for a candidate to speak to people who hold the same views. It’s harder but important to reach out to others who look at the world differently. I look forward to meeting with the students and faculty of Liberty University.”

It shows, for example, that Sanders is trying to fulfill his pledge to try to appeal to voters across the aisle, despite the labels attached to him. And it shows him as a gracious campaigner; Falwell has regularly invited top Democrats, many of whom haven’t even responded to the invitations.

And if Sanders may be the most left-wing pol to speak at what has been called the evangelical Notre Dame — a move that seemed to surprise conservatives as much as Sanders’ own allies — he is not the only Democrat to speak there.

Jesse Jackson once spoke there, as did the late Sen. Ted Kennedy, back in 1983 — a memorable performance that Sanders may want to study:

“They seem to think that it’s easier for a camel to pass through the eye of the needle than for a Kennedy to come to the campus of Liberty Baptist College,” the Massachusetts Democrat quipped.

In some respects, Sanders’ appearance may evoke the campaign address of another Kennedy, when John F. Kennedy addressed the Greater Houston Ministerial Association in 1960 with the aim of easing the fears of top Protestant leaders alarmed at the prospect of the nation electing its first Catholic as president.

But for conservative Protestants, such denominational divisions have largely receded, or have been overcome by the urgency of electing someone who shares their policy goals, even a Mormon such as Mitt Romney.

The real difference, and one that Sanders’ appearance may underscore, is the debate over how to interpret the Judeo-Christian mandates of the Bible: as matters of doctrinal orthodoxy, or putting that faith into practice.

Sanders proudly embraces the latter option, and has shown himself to be a fan of Pope Francis and the pontiff’s agenda on matters such as social justice, economic opportunity and climate change, all of which Sanders casts in moral terms.

But how well Sanders — or the pope — might play before what Falwell admits is “a very conservative student body” may indicate whether, in the context of the current American religious culture, that faith-versus-works divide can be bridged, or will widen further.