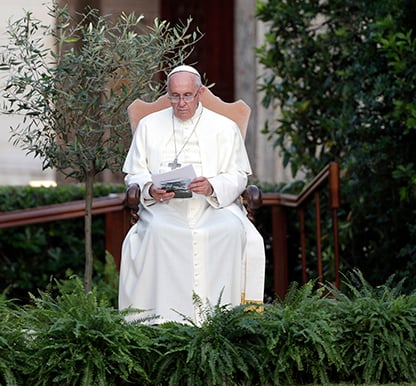 Pope Francis, shown here in the Vatican gardens, is speaking out against deforestation in his native Argentina. Photo courtesy of REUTERS/Max Rossi

(Reuters) – Pope Francis criticized the destruction of forests in order to plant soy in an interview with an Argentine radio station on Saturday, reinforcing his message that the environment should take precedence over financial gain.

“It hurts me in my soul when I see deforestation to plant soy,” said the pope in an interview with two priests at Radio Parroquial Virgen del Carmen in Campo Gallo, a tiny parish radio station in the poor northern province of Santiago del Estero in his native Argentina.

“It will take thousands of years to recover. Look after the woods and water.”

Argentina is the world’s largest supplier of soymeal and soyoil, and much of its vast pampas that were once given over to cattle ranches now grow the plant, used for animal feed and in foodstuffs, with China the leading importer.

In neighbouring Brazil, also a major soy supplier, environmentalists claim that its cultivation has led to the destruction of rainforest.

The head of the 1.2 billion member Catholic Church has caused controversy before by weighing into debates on the environment and condemning speculation in food commodities.

He visited South America last month and gave passionate speeches in which he censured capitalism, championed the rights of the poor, and warned of irreversible damage to the planet.

In an encyclical dedicated to the environment in June, Francis, the first pope from a developing nation, advocated a change of lifestyle in rich countries and demanded swift action to save the planet from environmental ruin.