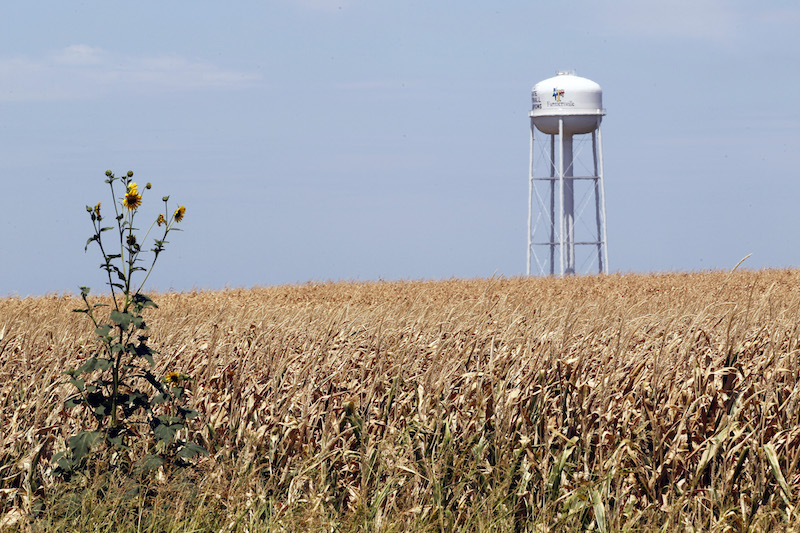 (RNS) Farmersville, Texas, lies about 35 miles northeast of Dallas — a few hours from my home in Houston. So when I read that the city council had scheduled a special town hall meeting to address opposition to a Muslim cemetery, I decided to take a road trip to attend the meeting.

As I neared Farmersville I drove past quaint businesses, many of which were in residential buildings. I stopped in a gas station where the clerk said he hadn’t heard of the cemetery controversy but shared that his Hindu faith required him to be accepting of everyone.

I didn’t realize I wasn’t yet in Farmersville.

I turned onto Texas State Highway 78 and drove through an increasingly rural landscape. The road went on for miles until signs for Farmersville finally began to appear.

I arrived late at Farmersville High School, the location of the meeting, and found a jam-packed parking lot. There were at least four police cruisers in the lot. Two officers directed me to park in a grassy area behind the school or in the church lot across the street.

I chose the back lot, half-kidding myself that it would make for a quicker escape, if necessary.

The temperature must have been in the 80s inside the school cafeteria. There were dozens of people in the hallways, the overflow from the cafeteria. The sound of makeshift paper fans waving back and forth filled the room. A line of people stood behind the microphone waiting for their turn to speak.

In the hallway a smiling woman manned a table with pamphlets extolling the town’s virtues. “Farmersville: Discover a Texas Treasure.”

The first speaker I heard complained to Imam Khalil Abdur-Rashid, the Islamic Association of Collin County representative, about what she understood to be the tenets of his faith.

“It’s not your custom to bury caskets,” she said, referring to the prevalent and erroneous belief that Muslims, who sometimes bury their dead without coffins, may poison the drinking water. The potential pollution of the water was repeated over and over.

The imam assured the audience that cemetery planners were going “above and beyond” Texas state requirements. His voice was not as loud as that of a man in the back of the room who shouted, “You’re all liars!”

Farmersville is a town of about 3,300 with a median income of $42,000. Three-quarters of the residents are white. It’s typical of small-town America.

So is the protest really about Farmersville? Or is it about Islamophobia of the sort that has beset American towns for years? Are these the same angry people we see in towns across America, scared of cemeteries, scared of mosques, scared of Muslims?

The people in this rural part of Texas are not the first to fear the unfamiliar.

In his book “American Panic: A History of Who Scares Us and Why,” Mark Stein examines the history of American bigotry. He quotes a 19th-century politician charging that Catholicism will rob Americans of our rights, and writes about a New York-based business owner who viewed Chinese immigrants as “ready and anxious” to step over Americans “to possess the land.”

At the town hall meeting, a woman faced Abdur-Rashid.

“Everywhere you have been you’ve caused some kind of problem,” she said. “It’s not going to happen in Farmersville.”

READ: Arian Foster: Can you be an atheist in the NFL?

“With all this opposition, why do you want to stay here?” asked another. It was a very serious question, a question that ignores the basic right of American Muslims to live their lives freely.

That’s what Islamophobia is really about: You don’t belong here. This is our land, our water, our beliefs, our country.

It’s a well-worn logic used by every discriminatory and hateful group. All this is mine and I will do whatever it takes to keep your hands off it.

Although such bigotry is part of our history, I believe justice is a fundamental American value. However, justice for victims of suspicion and prejudice has never been achieved without effort. I urge us all to strive to keep anti-Muslim rhetoric from becoming normalized. Islamophobia should never be acceptable.

At the town hall meeting, a Farmersville resident who opposes the cemetery told me she was suspicious of the Buddhist meditation center in town because they’re “too quiet.” She wasn’t too sure about the Mormon church either, because “they’re never there.”

“When people are too quiet I think they’re up to something,” she said.

(Ruth Nasrullah is a freelance journalist based in Houston. She blogs regularly for the Houston Chronicle and writes for MuslimMatters.org. Follow her @ruthnasrullah.)