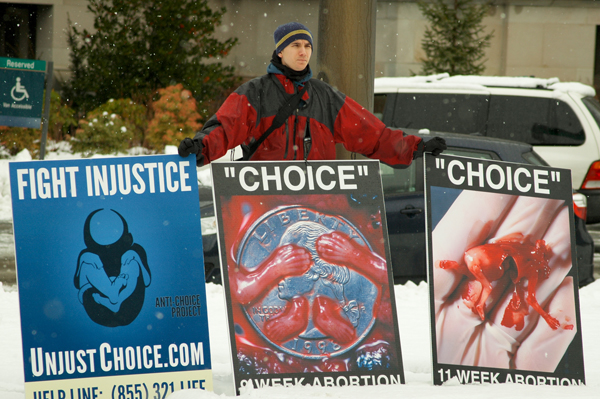 (RNS) In recent years, up-and-coming leaders in the anti-abortion movement have been pushing for a kinder, gentler strategy for their “pro-life” campaign — an effort to win hearts and minds with an upbeat message and affecting ultrasound photos.

Many feared the in-your-face approach of bloody images that for decades were a staple of the annual March for Life may have repelled more than they converted.

“You’ve got some who believe in holding up graphic signs of abortion. I’m not one of those and I don’t think that’s the best approach,” Jeanne Monahan said in 2013 after she took over as head of the March for Life, which draws a huge crowd to the National Mall in Washington on the Jan. 22 anniversary of the Roe v. Wade decision that legalized abortion.

Simcha Fisher, writing in the National Catholic Register, agreed: “These images are like a terrible weapon which should be used with fear and trembling, and only as a last resort,” she wrote in an essay titled “Eight Reasons Not to Use Graphic Abortion Images at the March for Life.”

But the undercover videos that have emerged of Planned Parenthood officials offhandedly discussing the price of fetal organs from abortions may have upended that dynamic — with Planned Parenthood staffers providing the most cringe-inducing sound bites:

“A lot of people want intact hearts these days,” Dr. Deborah Nucatola, senior director of medical services for Planned Parenthood, says in the first undercover video, released July 14 by anti-abortion activists who pretended to be researchers in search of fetal tissue.

The Center for Medical Progress says it has hundreds of hours of secretly recorded conversations and videos with Planned Parenthood officials, which it is releasing over time.

The organization and many of its allies claim Planned Parenthood is violating the law against selling fetal tissue for profit. But that’s not actually clear from the videos, and federal law regulating such compensation is vague enough that there may well have been no illegal activity.

The real power of the videos, instead, is the casual nature of the chitchat — over lunch and glasses of wine — of what lay people would view as grisly medical procedures dealing not with an appendix or tonsils, but a fetus:

“We’ve been very good at getting heart, lung, liver, because we know that, so I’m not gonna crush that part. I’m gonna basically crush below, I’m gonna crush above, and I’m gonna see if I can get it all intact,” Nucatola says.

That’s almost the rhetorical analogue of “The Silent Scream,” the 1984 film showing an ultrasound of an abortion. The film was widely used by abortion foes but also sparked a serious backlash.

Now, gruesome is back.

The latest video, the fifth, which dropped on Aug. 4, showed another Planned Parenthood staffer cooly discussing harvesting “intact fetal cadavers” — and the associated “line item” costs — and it contains graphic footage of an examination of recognizable fetal remains in a lab dish.

Activists have responded by filling social media streams not only with demands for action but also with repeated references to “baby arms and legs” and “baby parts,” and images from the latest graphic video. Nazi comparisons have proliferated, as well as charges of “infanticide” and murder.

Columnists like George Will and Ross Douthat are also writing in detail, and with powerful outrage, about abortion in mainstream outlets like The Washington Post and The New York Times.

The question is, will the new-old approach work?

Some cite the success of graphic anti-smoking ads that show people with holes in their throats, for example, or animal cruelty campaigns that use vivid photos.

The abortion videos have already prompted the head of Planned Parenthood, Cecile Richards, to apologize for the “tone” of the recorded discussions. Even Hillary Clinton, a strong Planned Parenthood supporter running for the Democratic presidential nomination, called the videos “disturbing.”

Abortions foes believe this is a turning point, a “game changer.”

But they also said that about the grisly scenes unveiled two years ago, when Philadelphia abortionist Kermit Gosnell was convicted of murder for performing hundreds of illegal late-term abortions, sometimes delivering the baby alive and then killing it.

Abortion rights supporters said the Gosnell case was about a rogue abortionist who was doing obviously illegal acts, but the shock of the abortions was the overriding impression.

And yet, exactly two years later, polling released in May showed that more Americans identify as “pro-choice” than do as “pro-life,” the first statistically significant lead since 2008.

Will this time be different? If the next polling data shows a significant shift in the anti-abortion direction, Americans may see even more graphic language and images, whether they want to, or not.