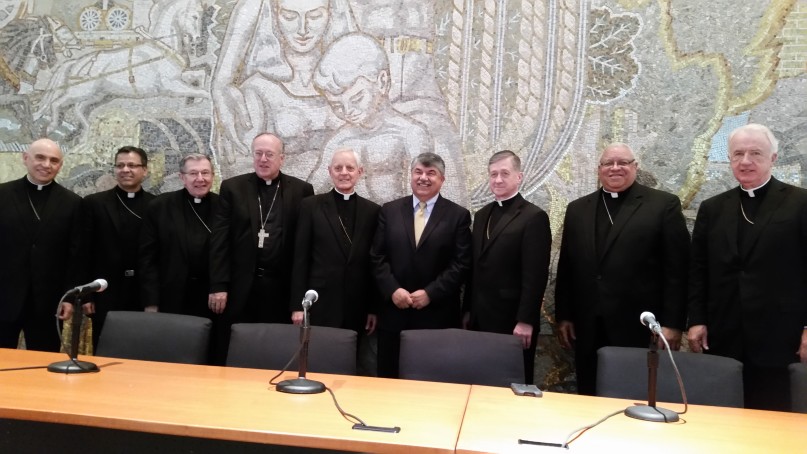 Chicago Archbishop Blase Cupich, third from right, stands next to AFL-CIO chief Richard Trumka at a June 15 event on economics and the Catholic Church in Washington, D.C. Youngstown, Ohio, Bishop George Murry is next to Cupich. Religion News Service photo by Mark Silk

(RNS) Pope Francis is set to name Chicago Archbishop Blase Cupich, viewed as one of his top allies in the American hierarchy, as a special delegate to a Vatican summit on family issues in October that is shaping up as a key test of the pontiff’s efforts to reform the Catholic Church.

The appointment was first reported Friday (Aug. 7) by Catholic News Agency.  It was confirmed by other church sources.

The church officials, who spoke on condition of anonymity because the news was not official, also said Francis was going to appoint another U.S. bishop to the synod. The sources said it would be Youngstown, Ohio, Bishop George Murry. Murry is a Jesuit like Francis and one of a handful of African-American bishops.

If these appointments are confirmed, it means Francis will have passed over more conservative candidates such as San Francisco Archbishop Salvatore Cordileone, an outspoken culture warrior and the U.S. hierarchy’s point man in the fight against gay marriage.

When the U.S. Conference of Catholic Bishops last November elected a four-person slate of delegates to the global meeting of bishops, called a synod, they also chose Cordileone and Cupich as the two alternates.

Blase J. Cupich of Spokane, Wash., far right, concelebrates Mass in 2012 with other U.S. bishops in the crypt of St. Peter’s Basilica at the Vatican. Photo by Paul Haring, courtesy of Catholic News Service

The four principal delegates included Philadelphia Archbishop Charles Chaput and other conservatives who have not been as enthusiastic as many bishops about Francis’ efforts to make the church more focused on social justice and on outreach rather than on a few doctrines and regulations.

That Francis is adding Cupich, whom he personally picked for the prestigious Chicago post last fall, to those four, along with Youngstown Bishop George Murry, and not Cordileone or someone like him, was seen by church insiders as an indication that Francis wants a different balance of U.S. voices at the synod.

Murry and Cupich took part in a Washington event in June, along with Cardinal Donald Wuerl and other church leaders seen as supporters of the Francis approach, with leaders of organized labor in an effort to refocus Catholic efforts on workers’ concerns.

By adding Cupich and Murry, Francis may also want to ensure more support for proposals to explore ways to allow divorced and remarried Catholics to receive Communion, for example, or to express a positive view of gay couples, single parents and others whose family life falls outside the Catholic ideal.

Last October, in the first synod of bishops called to consider how to adapt the church’s approach to the modern realities of family life, such proposals sparked unusually public disputes among church leaders and a brush fire debate that has continued to flare since then. 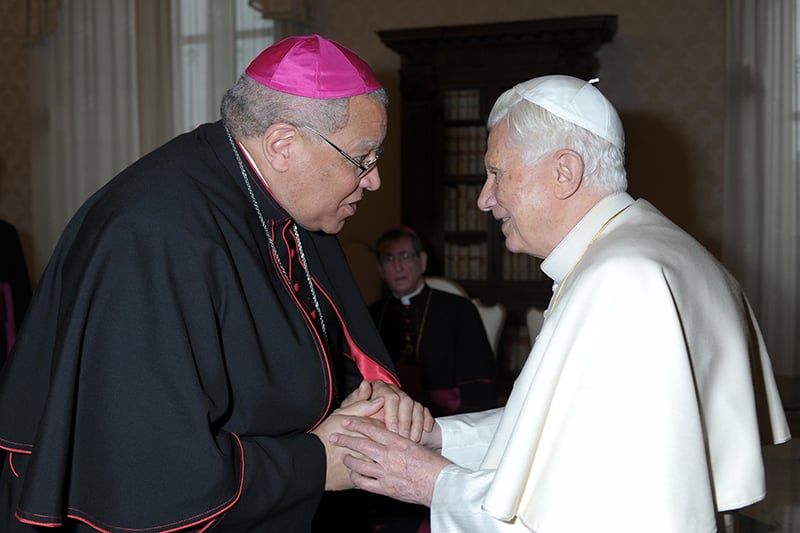 The issues themselves are seen as threats to church teaching by some, but are also seen as a test of the bigger question about whether, and how, Catholicism can change doctrine or practices. How that question is resolved could go a long way toward testing whether the 78-year-old Francis can effect the kind of reforms he wants, and that many Catholics expect.

The debate at the Oct. 4-24 synod, which will follow on the heels of Francis’ first visit to the U.S., a trip also expected to highlight many of these hot-button issues, is likely to be intense.

Each nation’s hierarchy has elected delegates for the meeting, but Francis — who wants to encourage a frank exchange of ideas — has also named dozens of additional participants, many with widely varying views.

These latest appointments may accelerate that dynamic.