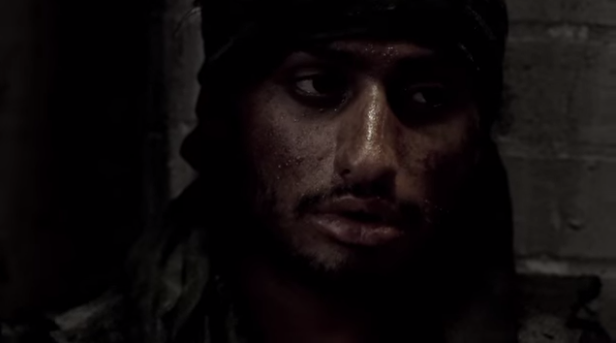 The man receives a letter from his brother in the U.K. expressing regret over the sibling's support for Islamist-backed terrorist campaigns.

“I wish I could see your face,” the brother says in an emotional voiceover. “I’d tell you I was sorry. I wish I could take back every time I sent you a tweet or got all gassed up saying that the West has turned its back on us.”

The video has been greeted by bouquets as well as bricks after the London-based Quilliam Foundation released it on YouTube last week. The clip, which lasts three minutes and 45 seconds, aims to stop young British Muslims from leaving the U.K. to join ISIS in Iraq, Syria and other parts of the Middle East.

So far, it's been viewed more than 45,000 times and joins an increasingly crowded market of online counter-extremism campaigns in Britain intended to combat the radicalization of British youth.

"It’s something of a growth industry at the moment," said Robert Cole, head of communications at the Amar International Charitable Foundation, which helped launch Open Your Eyes, another anti-radicalization effort. "Some people are trying to jump on the video bandwagon to gain financial support from charities.”

"No family should lose another loved one to such hatred,” says a message accompanying the video on YouTube. "Not another child. Not another sister. #NotAnotherBrother.”

That message was written by London–based advertising company Verbalisation, which employed former British Army officers to make the Quilliam video using "PSYOPS," which stands for “psychological operations.” The military method is used to influence “the enemy” or civilian population through face-to-face conversations, leaflet drops, radio broadcasts and online campaigns.

Sven Hughes, Verbalisation’s founder and a former reservist with the British Army in its fight against the Taliban in Afghanistan, said in an interview with the Daily Telegraph, that he didn't see anything wrong with using the military's psychological method. “We have just been looking at the way ISIL uses language and how we can better intervene.”

Critics disagree. On the eve of the video's release, Sadakat Kadri, a British lawyer and expert on Sharia law, told The Guardian, “The problem with Quilliam is that it just doesn’t have any credibility ... it isn’t an intermediary to anyone within the Muslim community.”

A senior Muslim leader who asked to remain anonymous added, ”The moment young Muslims hear the name 'Quilliam' they switch off. They say it’s part of the British government, that it received millions of pounds during the first three years of its seven-year existence, and that it puts out anti-ISIS propaganda with the help of the British Army, police and (the Secret Intelligence Service) MI6. This comes at a time when the British are planning even more draconian measures against Islamists, and many conservative Muslims believe they’ll also be targeted.”

But Usama Hasan, senior researcher at Quilliam, said that if the British government passes legislation that Muslims feel targets them unfairly, the fight against extremists could be even harder.

“Our basic position is that we should not compromise fundamental freedoms and liberty in order to fight terrorism and extremism because it is the respect for basic freedoms that made the Islamic nations strong in the past and that makes Western nations strong at the moment," he said.

The video was crowdfunded by 150 donors from 10 countries. Its release coincides with calls from the British government for YouTube to take down extremist videos that could be used to recruit Britons to join ISIS in Iraq and Syria.

Jonathan Russell, political liaison officer at Quilliam, said that until recently the foundation focused its efforts on advising the government how best to counter Islamists.

Ken Bromfield, one of Britain’s top education specialists, said he saw a need for more education about radical Islam.

"The need in Britain right now is to have ongoing debates in schools, colleges, universities and on social media about the very nature of Islam," he said. "Difficult questions must be asked if we want to stop young Muslims drifting towards the extremists."

Fiyaz Mughal of the British group Tell Mama, which monitors hate speech against British Muslims, said he was thinking of making a video himself. “Videos can help in the fight against extremism, but it depends who makes them."

Another group seeking to dissuade Muslims from joining ISIS is Upstanding Neighbourhoods, which runs the Open Your Eyes campaign.

"If someone is quite young, then they don’t have much life experience, so they can easily be given the wrong sort of information about Islam. The big issue is this: Can they be channeled in a different direction? We say they can," he said.