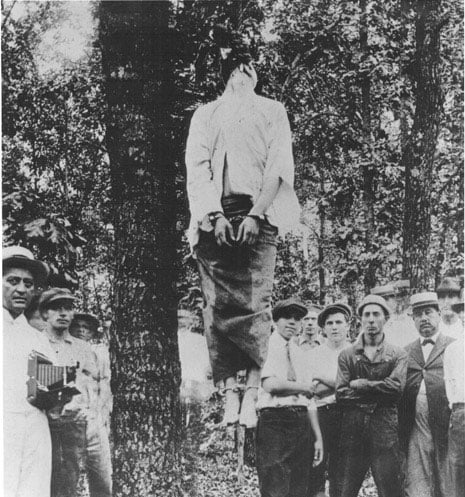 I once lived in Marietta, Georgia, a suburb of Atlanta. Occasionally, I would drive by a particular intersection, and I would shudder.

It was at that place -- right down the road from today's Starbucks and Chipotle -- that Leo Frank's body hung from a tree.

It was one hundred years ago this week.

When I first moved to Atlanta, I learned that you could discuss almost anything with Atlanta Jews.

But there was one subject that was forbidden -- and that was Leo Frank. The memory was still too deep and too raw -- as if it had happened only yesterday.

The Leo Frank story is the primal trauma of Southern Jewry. (The best book on this sordid tale -- And The Dead Shall Rise by Steve Oney). And, in fact, the wounds are still raw, even and especially in Marietta, Georgia.

Leo Frank was born in 1884, and grew up in Brooklyn, and he attended Pratt Institute and Cornell University. He moved to Atlanta to manage the National Pencil Company. In 1910, he married Lucille, who came from a prominent Atlanta Jewish family, and two years later he became president of the B'nai B'rith Gate City Lodge. Their home was in the middle of what is now Turner Field in Atlanta.

Frank was arrested for the crime and brought to trial. There were allegations of sexual violence. The mobs in the street screamed: "Crack that Jew's neck!" Their main inspiration was the famous Georgia Populist politician, Tom Watson, whose statue stood, until relatively recently, at the Georgia state capital.

The jury needed less than four hours to convict Frank. He was sentenced to death. A round of appeals lasted nearly two years.

Frank finally lost his appeal, but Georgia Governor Frank Slaton commuted his death sentence to life imprisonment. Frank was transferred to the state prison farm at Milledgeville, southeast of Atlanta. On the afternoon of August 16, 1915, a group of twenty-five men, who styled themselves the Knights of Mary Phagan, drove from Marietta to Milledgeville. Breaking into the prison farm, they abducted Frank.

Early the next morning, they hanged Leo Frank from an oak tree in Marietta. It took him nearly ten minutes to die. The murderers posed for photographs with the corpse. Those photographs became postcards which, along with pieces of the rope that hung Frank, were sold as souvenirs.

The Leo Frank case inspired books, movies, and television specials. Playwright David Mamet wrote about it in The Old Religion. Alfred Uhry wrote a musical about it (“Parade”). The Leo Frank case spawned the creation of both the Anti-Defamation League, America’s foremost civil rights organization, and the revival of the Ku Klux Klan.

You want a primer on anti-Semitism? The Leo Frank case has it all.

Leo Frank was the only Jew lynched in America; on any given day, tens of Southern blacks hung from trees. That is one reason why more than 140 of my rabbinical colleagues have been marching through the South, participating in the N.A.A.C.P.’s “America’s Journey for Justice,"  a 40 day march from Selma, AL to Washington, D.C. They are carrying Torah scrolls, walking arm and arm with black leaders -- to bear witness to our common otherness, and to bear witness to our common dream of an America that will make these things impossible to repeat.

Every year on the anniversary of Leo Frank’s death, a Jewish man in Atlanta lights a yahrzeit (memorial) candle for him – as if Frank had been a member of his own family.

When he attends yizkor (memorial) services on Yom Kippur, he says kaddish for Leo and Lucille Frank, along with the names of his parents and other departed relatives.

I asked him why.

“Leo and Lucille never had children,” he said to me. “So I guess that I adopted them. Their memory is my responsibility now."

And ours, as well.

Related Posts
By Shumaila Hemani
As a Sufi singer, I believe the sounds of world religions can cultivate compassion during COVID-19
By Carr Harkrader
12 Black faith leaders who shaped America
By William Kole
Interfaith group: No Buddhist or Hindu statues in nightclubs
By Julia Lieblich, Luc Vachez
France’s ‘hip’ female rabbi draws Muslims, Christians and Jews in a time of crisis
By Jeffrey Salkin
What religion is Dylan now?