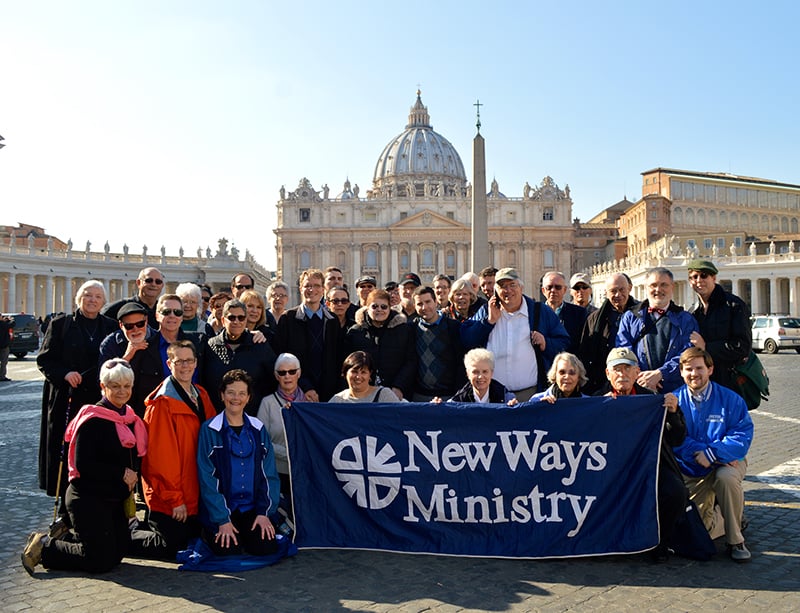 The Catholic gay rights group New Ways Ministry criticized the decision by the Philadelphia Archdiocese to cancel the organization’s workshop on gender identity, which was to take place at the same time as Pope Francis’ visit to the World Meeting of Families. Photograph taken on Feb. 18, 2015, when New Ways Ministry’s pilgrimage group was given VIP seats to a papal audience in St. Peter’s Square. Photo courtesy of New Ways Ministry

(RNS) The Catholic gay rights group New Ways Ministry is criticizing a decision by the Philadelphia Archdiocese not to let a local parish host a workshop on gender identity that would have coincided with Pope Francis’ visit to the World Meeting of Families.

“How are LGBT people supposed to feel welcome in the Catholic Church when church officials will not allow them to speak?” asked Francis DeBernardo, executive director at New Ways Ministry, one of the organizers of the workshop.

“No speakers at the World Meeting will address the topic of gender identity, yet this is an issue that is being faced by more and more Catholic families and communities in the U.S.” DeBernardo said in a statement.

The “Transforming Love: Exploring Gender Identity from Catholic Perspectives” workshop was to take place Sept. 26 at Philadelphia’s St. John the Evangelist Catholic Church parish center. But those plans were canceled after Archbishop Charles Chaput intervened, New Ways Ministry said in an online statement. The Philadelphia Inquirer reported that the organizers are looking into relocating the workshop to Arch Street United Methodist Church, which is near the city’s Convention Center.

The workshop would have coincided with Pope Francis’ highly anticipated visit to Philadelphia on Sept. 26-27.

Speaking before the New Ways Ministry announcement, Kenneth F. Hackett, U.S. ambassador to the Holy See, said he did not believe LGBT issues would be discussed at the World Meeting of Families.

“Why would they want to come anyway if they’re opposed to Catholic views on the family?” he said.

The ambassador explained that while the World Families gathering would not change attitudes toward same-sex couples, there would be an openness to people “in different circumstances,” such as women who have left violent relationships.

“There may be people protesting on LGBT rights or gay marriage equality, but that’s their right in our country so we respect that,” Hackett said.

Earlier this year, Chaput made it clear that he was opposed to welcoming LGBT organizations to the World Meeting. “We don’t want to provide a platform at the meeting for people to lobby for positions contrary to the life of the church,” he told journalists in Rome. “People who have experienced same-sex attraction” could attend the congress, he said, but gay families would not be up for discussion.

DeBernardo said the workshop would have centered on transgender and intersex people talking about their personal and faith journeys, along with a family member, and would not have discussed the theology of gender identity.