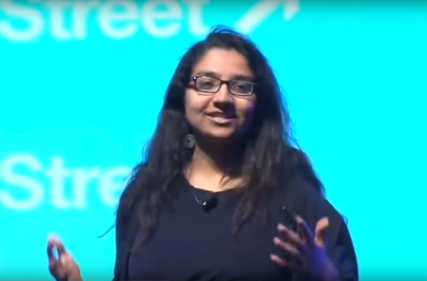 “You don’t have to be Jewish.”

That was the tagline of a classic (decades ago) ad campaign for Levy’s rye bread.

Today’s question is: Do you have to be Jewish to be the leader of a pro-Israel group?

J Street University, the left wing pro-Israel organization’s campus branch, has elected Amna Farooqi as the chair of its national student board.

Amna is a senior at the University of Maryland.

And she is of Pakistani descent.

Amna grew up in a fairly religious Muslim home in Potomac, MD. She had “a lot of Jewish friends.” The University of Maryland has one of the highest percentages of Jewish students in the United States.

As you might expect, Amna’s family was sympathetic to the Palestinian cause. But Amna wasn’t satisfied. She decided that she needed to expand her horizons on that issue.

So, she took a course about Israel in college. That was when she “fell in love with Zionism…Because Zionism became about taking ownership over the story of one’s people. If Zionism is about owning your future, how can I not respect that?”

Taking ownership of your story. Owning your future. That’s a pretty good working definition of Zionism, isn’t it?

She then spent a semester at Hebrew University of Jerusalem’s Rothberg International School.

Which is to say: She has spent more time in Israel than the overwhelming majority of American Jews.

I am not a member of J Street. But, I find the selection of Ms. Farooqi intriguing.

Because, what’s the message? It’s not only that you don’t have to be Jewish to support Israel, or to admire Zionism — which Ms. Farooqi has said she does.

Watch her speech at J Street.

No, I don’t agree with everything she says. She is a little too glib in singling out the occupation as the elephant in Israel’s living room.

Those who eagerly support a Palestinian state that includes the hills of the West Bank must confront the possibility of militants with rockets, potentially aimed at the landing strips of Ben Gurion Airport.

And those who oppose any territorial concessions must ask themselves whether a Jewish and democratic state can sustain itself with an exploding Palestinian demographic.

Amna is a Rorschach test. As Steven Cohen, a sociologist at Hebrew Union College-Jewish Institute of Religion, has said:

“For the Right, her election symbolizes the extent to which the Left will go in abandoning ethnic loyalty and commitments.

“For the Left, her service to J Street symbolizes the potential to cross boundaries and build coalitions for peace. As with much in life, good or bad is in the eyes of the beholder.”

Zionism has never been a “Jews only” club. Need I remind you of the centuries-old tradition of Christian Zionism? Without the support of British Christian Zionists like Arthur Balfour and Lloyd George, the Jewish State could not have come into existence.

They are far from alone. Walk through Jerusalem’s Germany Colony, and you will streets named for European gentile supporters of Zionism.

Nor has the state of Israel believed that only Jewish leaders can defend its interests. Reda Mansour, a Druze diplomat served as Atlanta’s respected Israel’s consul-general. Years before, an Israeli Arab held the same post.

The choice of Ms. Farooqi offers us the opportunity to re-examine the complex relationship between Muslims and Zionists.

He tells the stories of local Arab leaders in the early 1900s who welcomed Jewish settlement as being economically advantageous; of Muslims who protected Jews from harm, and, of Muslims who sold land to Jews, and taught them about the land.

Hasan Shukri, the Arab mayor of Haifa during World War I and in the years between 1927 and 1940, cabled the British government in 1921:

“We do not consider the Jewish people as an enemy…. We consider the Jews as a brotherly people sharing our joys and troubles and helping us in the construction of our common country. We are certain that without Jewish immigration and financial assistance there will be no future development of our country as may be judged from the fact that the towns inhabited in part by Jews such as Jerusalem, Jaffa, Haifa and Tiberias are making steady progress while Nablus, Acre and Nazareth where no Jews reside are steadily declining.”

To put it bluntly: not all Palestinian Arab leaders were Haj Amin el-Husseini, the diabolical Grand Mufti of Jerusalem and Nazi sympathizer and collaborator.

At the very least, she deserves our admiration.

First, think about the the risks — of ostracism and more — that she is taking within her ethnic community. We need to remember and honor those risks.

Second, imagine a kind of success that this young woman could have. She has the potential to positively influence other Muslim and Third World college students — and win them over to at least a partial appreciation of Zionism and Israel.

You — and all of us who care about Israel and Zionism — need it.

News
Taco trucks and voter guides boost political profiles of faith communities at the margins
Opinion
Against the darkness: Remembering Pittsburgh’s Tree of Life shooting
News
Study: Biden still leads among Latino Christian voters, but Trump’s support has grown
News
In Oregon, churches and anti-fascists unite to provide mutual aid to fire evacuees and others in need
Opinion
The most Jewish thing that Ruth Bader Ginsburg ever did
© Copyright 2020, Religion News Service. All rights reserved. Use of and/or registration on any portion of this site constitutes acceptance of our User Agreement and Privacy Policy, Privacy Statement and Cookie Notice. The material on this site may not be reproduced, distributed, transmitted, cached or otherwise used, except with the prior written permission of Religion News Service.