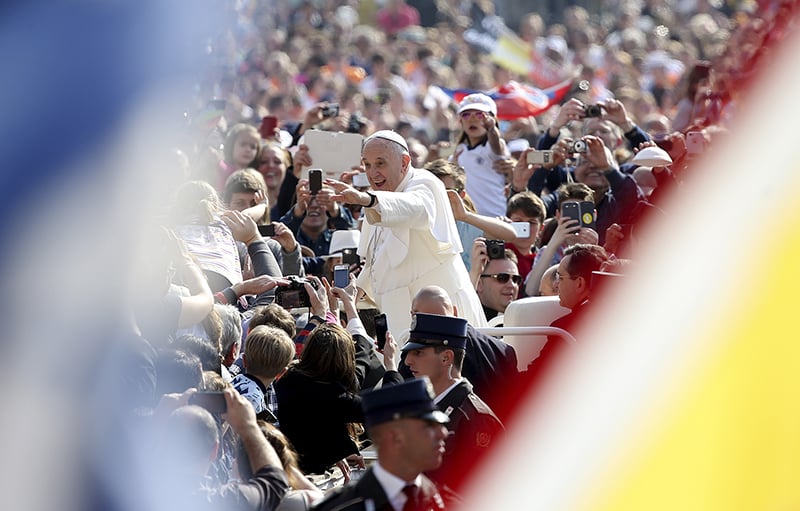 Pope Francis waves as he arrives to lead the general audience in St. Peter's Square at the Vatican on April 15, 2015. Photo courtesy of REUTERS/Alessandro Bianchi *Editors: This photo may only be republished with RNS-POPE-CLIMATE, originally transmitted on April 15, 2015 or with RNS-POPE-POLLS, originally transmitted on Sept. 16, 2015.
August 25, 2015
Cathy Lynn Grossman

They really, really like him, too, particularly Catholics -- even if they’re sometimes confused about what he believes.

But most Americans (52 percent) and nearly a third of Catholics (31 percent) say they hadn't heard about the pope’s September visit to Philadelphia, New York City and Washington, D.C., according to a new survey released Tuesday (Aug. 25) by the Public Religion Research Institute in partnership with Religion News Service.

Overall, 67 percent of Americans and 90 percent of U.S. Catholics hold a favorable view of him.

“Americans embrace Pope Francis as a celebrity -- even when they don’t know what he thinks or does,” said Robert Jones, president and CEO of PRRI.

Many attached glowing traits to Francis. Asked to describe him in their own words, most just identified him by his role as pope or other neutral terms, but 27 percent chose positive terms, calling him “humble,” “compassionate” and “caring.”

The majority share his top priorities -- on concern for the poor, the environment and the economy. But the flock veers from the shepherd on doctrine, particularly on sexuality and marriage.

However, on question after question, Jones said, 1 in 5 Catholics said they didn’t know the pope’s views. And when they think they do, they’re sometimes wrong.

Consider the confusion over same-sex marriage. Francis has not changed the Catholic Church’s official position opposing its legalization. Yet many U.S. Catholics (38 percent) believe he supports it, according to the survey of 1,331 U.S. adults. It was conducted in English and Spanish Aug. 5-11. The margin of error is plus or minus 3.4 percentage points.

The confusion might be because people like to believe the pope -- famous for his  “Who am I to judge” comment -- thinks as they do: 49 percent of Catholics who support same-sex marriage mistakenly think the pope does as well.

Coming after the eight-year reign of Pope Emeritus Benedict XVI, a theology professor with a passion for orthodoxy, Pope Francis’ “shift in tone has changed people’s perceptions,” said Jones. The U.S. bishops take a critical hit with Catholics. While 80 percent of Catholics say Argentine-born Pope Francis, who has never visited the United States, understands of the needs and views of American Catholics well, only 60 percent say the same for the U.S. bishops.

Neither are Catholics uniformly on board with Francis’ many calls for social and economic justice. Most (57 percent), chiefly Democrats and women, say the Catholic Church should focus more on social justice and the obligation to help the poor than on abortion and the right to life. But 33 percent of Catholics, chiefly Republicans and men, say the opposite.

Overall, Catholics are statistically in line with most Americans on current hot-button social issues:

The Catholic Church preaches against homosexual behavior.  But PRRI finds most U.S. Catholics either don’t know or don’t heed that teaching: 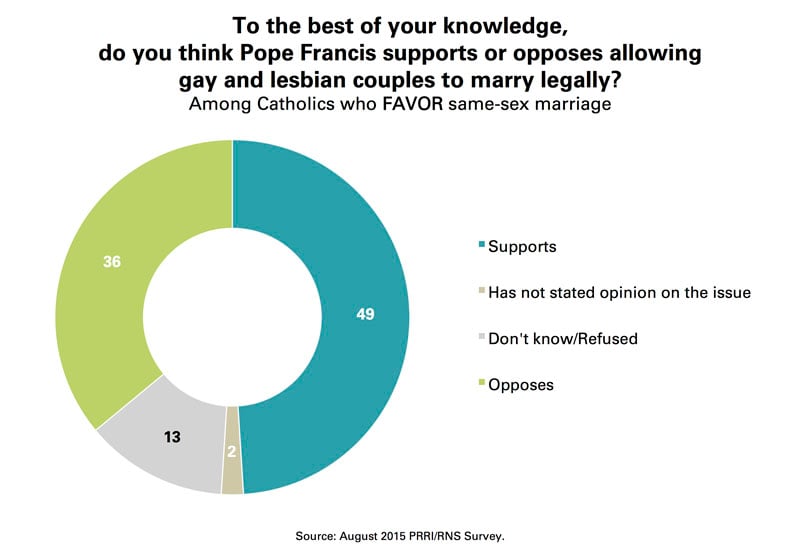 Reactions to the pope also reflect the complexity of the church in the United States today. Catholics are not only divided by ethnicity, generation and geography; they also differ in the ways they see the church, its role in their lives, in politics and in society.

“There is one Catholic Church in the world, but an anthropologist from Mars who landed in the U.S. today would see two churches,” said Jones.

One is conservative, 76 percent non-Hispanic white, older and centered in the northeast and Midwest, according to PRRI’s 2014 American Values Atlas, issued in February 2015, based on a random national sample of 11,115 Catholics. 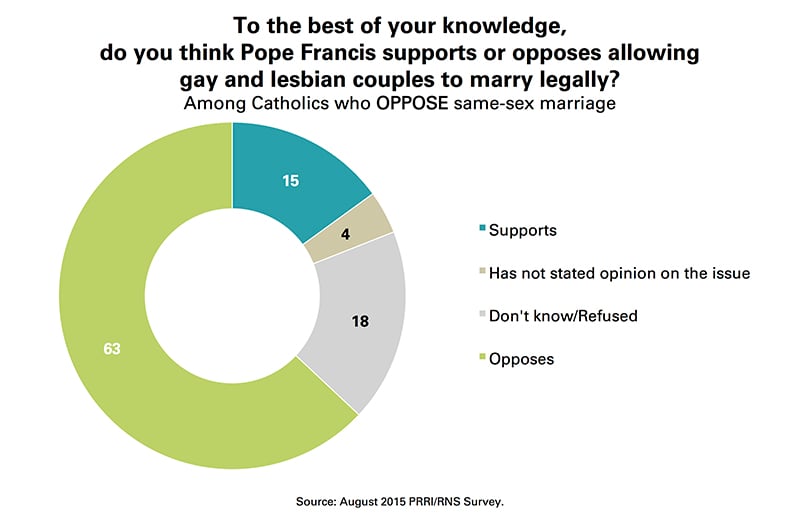 The other is young, overwhelmingly Hispanic and centered in five states in the Southwest: Texas (where 74 percent of Catholics are Hispanic), California (70 percent), New Mexico (70 percent), Arizona (59 percent) and Nevada (59 percent).

There's another division -- one the Catholic Church would like to erase by bringing former Catholics back to the fold. These are the 15 percent of Americans who say they grew up Catholic but told PRRI they no longer identify with the faith.

Still, the survey finds, 66 percent of Catholics and 51 percent of former Catholics expect Pope Francis will attract more Catholics back to the church.

Jones speculates that the pontiff "might change former Catholics views of the institutional church if it begins to look and feel more like Pope Francis’ persona."

They might engage more in church life, attend Mass or even resume identifying as Catholics -- the ultimate “Francis effect.”

The open question, said Jones, is whether “Pope Francis will function more like the Dalai Lama. They have warm feelings for him but they are not going to go hunt down a Buddhist meditation center.”