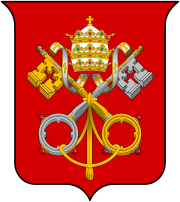 Coat of Arms of the Holy See

On Tuesday evening, a few hours after the Vatican announced Pope Francis’ streamlining of the Catholic marriage annulment procedure, Cardinal Raymond Burke, whom the pope demoted last year as head of the church’s highest court, attacked what the pope did.

But Burke did not so much as mention the pope. Speaking at ultra-conservative Franciscan University of Steubenville, Ohio, he gave prepared remarks designed to dissuade next month’s Synod of Bishops from doing what Francis had already done.

Here’s the set-up. Last June, the Vatican released the working document for the Synod called an Instrumentum Laboris. In it are a couple of sections (114 and 115) dealing with streamlining annulment, including recommendations by some of the participants in last year’s Synod that diocesan bishops be permitted to carry out the procedure on their own and that the automatic review process be done away with. There was every reason to suppose that these would be on the table for a vote by the Synod in October.

Instead, Pope Francis took matters into his own hands, not only doing away with the automatic review, for which there was widespread support at last year’s Synod, but also allowing local bishops to grant uncontested annulments within 45 days, about which, according to the Instrumentum, there was “no agreement.” Francis thereby served notice that he is prepared to make changes in ecclesiastical rules whether or not the upcoming Synod votes for them — as in, perhaps, permitting a penitential path to Communion for the divorced and remarried.

For his part, Burke began by declaring that the Synod cannot decide such matters, which would involve amending canon law. “The Synod of Bishops has no authority to change doctrine and discipline,” he said. He then proceeded to dump on both recommendations, saying they effectively violated the church’s doctrinal obligation to determine that a given marriage is truly a “nullity.” The whole enterprise, he claims, reveals the dangers of “sentimentalism” and “a false compassion,” reflecting a “post-canonical antinomianism” that has afflicted the church since the end of the Second Vatican Council. Whew.

Now, you might ask, why did Burke go ahead with his speech when, as even the folks in Steubenville cannot have failed to notice, the pope had just, on his own authority, promulgated new canon law (here and here) incorporating both recommendations. As they say, Roma locuta est, causa finita est (“Rome has spoken, the case is closed”).

Pontiffs have been laying down canon law on their own say-so since the 11th century, so Burke, traditionalist that he is, can hardly claim that Pope Francis has no warrant for doing likewise. But as the Washington Post reported Monday, he went so far as to declare in a recent television interview that the pope “does not have the power to change teaching [or] doctrine.”

It’s hard to avoid the conclusion that the cardinal believes this pope has acted beyond his authority in changing the annulment procedure as he has. It’s also hard to avoid the thought that, as the pope proceeds to change what the church teaches, some traditionalists will abandon ship, and go into schism.