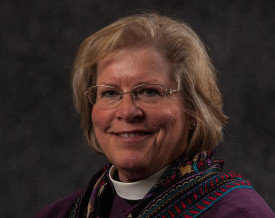 Heather Cook resigned her post as an Episcopal Bishop after killing a bicyclist in a hit and run accident.
September 9, 2015
Reuters Sept 8 (Reuters) - A former Maryland Episcopal bishop faces 10 years in prison after pleading guilty Tuesday to texting and drunken driving in a hit-and-run accident that killed a cyclist, according to her attorney.

Heather Cook, 58, the first female bishop of the Episcopal Diocese of Maryland, pleaded guilty one day before she was to stand trial on charges of automobile manslaughter, drunken driving, texting while driving and leaving the scene of a fatal accident, according to attorney Jose Molina.

Prosecutors will ask that Cook serve 10 years prison when she is sentenced Oct. 27, Molina said.

Cook veered into a bike lane in suburban Baltimore and crashed her sports utility vehicle into Tom Palermo, 41, killing him, on Dec. 27, according to prosecutors.

Cook left the collision scene and returned about 30 minutes later. Police at the scene gave her a breathalyzer test that revealed a blood-alcohol level of 0.22 percent, more than twice the legal limit.

Cook originally had pleaded not guilty in April to all charges.

"One of the primary motives for entering a guilty plea now was to help the Palermo family bring some degree of closure in terms of their healing process," Molina said.

Cook resigned from her position after she was charged In December, and the church revoked her clergy credentials.