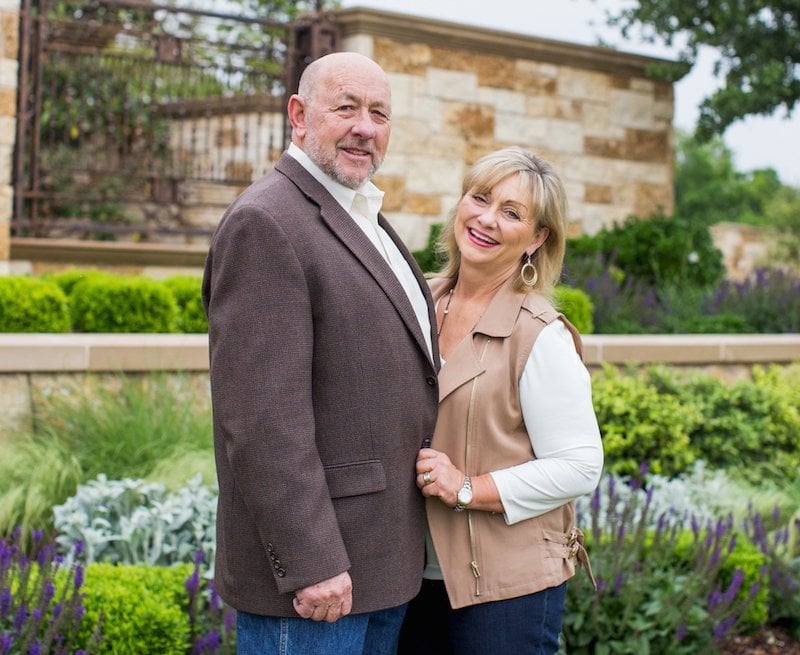 Farris Wilks and his wife Joann are shown in this undated photo released to Reuters on September 9, 2015. Farris and Dan Wilks, along with their wives, are the largest donors in the 2016 presidential election to date. REUTERS/Courtesy of Jon Francis/Handout via Reuters

NEW YORK (Reuters) – One Saturday morning in August, Pastor Farris Wilks, a brawny man with a close-cut beard, walked up to the altar of the church he leads, the Assembly of Yahweh, 7th Day.

The church, which sits off a two-lane, 75-mph highway, draws most of its members from nearby Cisco, Texas, a town of 3,800 filled with empty storefronts, idled derricks and beat-up houses. Church doctrine considers being gay a serious crime, the Bible to be historically and scientifically accurate in every detail and abortion to be murder, including in cases of rape or incest.

Wilks bowed his head and closed his eyes. “We lament and mourn the great sin of our nation, the many millions of babies murdered, and we pray that you turn these people away from this evil,” he said.

A slide flashed above the altar on the church’s movie screen with instructions on how to sign a petition asking Congress to cut off federal funding for Planned Parenthood, the women’s health care agency that provides abortions and other medical services.

Cisco has two stoplights but 10 churches. So it isn’t unusual for residents to turn to their pastors for guidance. What is out of the ordinary is for that pastor to also be a billionaire. Farris Wilks, 63, and his younger brother Dan, 59, made a fortune in the recent oil-and-gas drilling boom.

Also setting Farris Wilks apart is a little-noticed filing with the Federal Election Commission in July that showed he and Dan, together with their wives, had given $15 million to a Super PAC backing Republican presidential contender Ted Cruz.

The Cruz donation makes the largely unknown Wilks family the biggest donors in the 2016 race for the White House. So far, they have even outspent the billionaire Koch brothers, who have vowed to use their Freedom Partners network of conservative donors to pour $1 billion into the election.

“We support (Cruz) because he believes in the morality of the free market, in keeping our country safe, and in the right of the unborn not to be killed in their mother’s womb,” Farris Wilks said in an email to Reuters, speaking on behalf of the Wilks family.

The bricklayer-turned-billionaire brothers grew up in a goat shed and now have their own private airport and plane. Their emergence as major players in the 2016 election speaks to the seismic shift that has taken place in U.S. campaign finance since the Supreme Court’s 2010 decision in the Citizens United case, which changed the way political campaigns are run and paid for.

The ruling opened the way for corporations, unions and the rich to spend unlimited sums of money in support of pet candidates and policies. In the case of the Wilks brothers, it potentially allows a small church entry into the highest level of national politics – the U.S. presidential election.

In sermons, recordings of which were reviewed by Reuters, Farris Wilks has called homosexuality “a perversion tantamount to bestiality, pedophilia and incest.” “It’s a predatorial lifestyle in that they need your children, and straight people having kids, to fulfill their sexual habits,” he said.

Climate change, he says, is God’s will. “If (God) wants the polar caps to remain in place, then he will leave them there,” he told congregants at a service in July 2013.

Farris has always preached, taking over the church from his father, Voy, who founded it. Women have to “keep silence” during assemblies and are advised to adhere to a dress code of no cleavage, bare skin, tank tops or skirts above the knee.

Farris’s brother Dan funds and attends a conservative Christian church founded by his father-in-law, which, with its theatrical lighting, smoke machines, rock band and darkened auditorium, has the feel of a nightclub.

The Wilkses say their support for Cruz is motivated by their political beliefs, not their religious convictions. Together with Cruz they share a passion for unbridled markets and are skeptical of the IRS and of scientific findings that climate change is man-made.

“I’m endorsing Ted Cruz for President because I agree with his policies and because he has guts,” Farris Wilks said in the email. “The truth is, Ted Cruz has never been to our church or endorsed any of our specific doctrines, nor have we asked him to. The beliefs we have in common are political beliefs.”

IRS filings show the brothers’ political activism is, however, driven in part by their religious beliefs.

The brothers each started nonprofits in 2011, which together have $270 million on hand. They have funded groups on the Christian right that want to ban gay marriage and abortion. Farris’ donations include $922,000 to the evangelical group the American Family Association as well as $1.5 million to Liberty Counsel. The Counsel is a conservative legal nonprofit that came to the aid of a Kim Davis, Kentucky clerk who was jailed last week for refusing to issue gay marriage licenses.

The brothers’ political giving has also intersected with their own economic agenda as frackers.

Last year in Denton, Texas, residents voted to ban fracking after growing concerned about the polluted air and water that some scientists associate with the technique. The Wilks brothers poured $800,000 into political campaign contributions to finance state legislators who opposed the ban, according to Texas campaign filings and women’s health website rhrealitycheck.org.

The effort culminated in May, when Texas Governor Greg Abbott signed a bill forbidding Texas cities and towns from banning hydraulic fracturing.

All 21 of the Texas legislators who received money from the Wilks brothers voted for the bill.

Success came late for the brothers. After high school, they became bricklayers and struggled financially. Cisco residents remember them begging for credit at the carpet store and auto dealership.

In 2002, as the Texas natural gas boom was under way, the brothers founded Frac Tech Services, which provided trucks to frackers. It succeeded almost overnight, and in 2011 they sold their majority stake to a consortium led by a Singaporean sovereign wealth fund for $3.2 billion.

They doled out generous bonuses to employees and started pouring their largesse into Cisco: the town has a plush new espresso-serving community center and sprawling sports complex.

Since 2011, the Wilkses have been on a land buying binge, purchasing hundreds of thousands of acres of ranch land in Texas, Idaho, and Montana, where, according to local land records, they have become the largest private landowners in the state.

Despite their wealth, the brothers are known locally for their everyman ways in a place where the newspaper’s motto is “Fear God” and raffle winners are awarded rifles. Farris, who still likes to wear jeans, work boots and a baseball cap, is partial to the 2 for $1.61 burritos at the Stripes gas station; Dan still rearranges chairs at local community gatherings.

“Farris is the dirt farmer. Dan has more Hollywood in him,” said Dan Griffith, who knows the brothers and owns a local shop that sells Wild West memorabilia and Confederate battle flags from the U.S. Civil War. 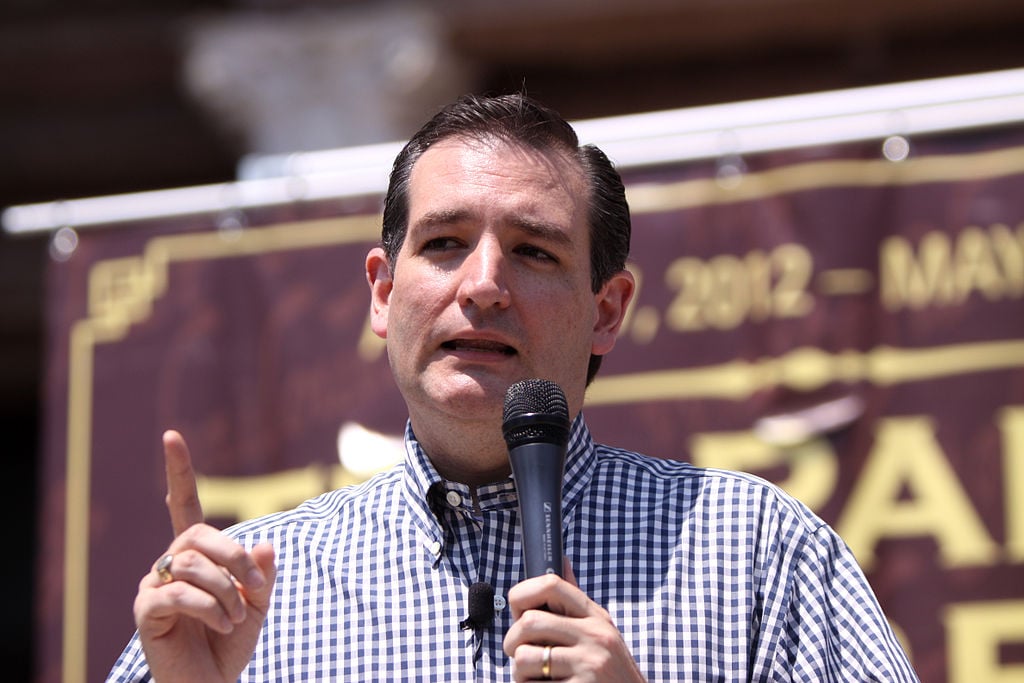 After a recent church service, Farris, dressed in a crisp blue dress shirt and black slacks, politely declined an interview request, saying, “I just don’t feel good about it. But I’m sorry for all the trouble you’ve gone to.”

The brothers, who have 17 children between them, have built palatial, gated compounds that stick out in the flat landscape of horse pastures and discarded farm equipment. Farris’ oversized pool has a huge cross on the bottom. The properties are surrounded by walls of steel fencing and state-of-the-art surveillance technology.

The brothers also employ a private security force, in Cadillac Escalades, made up of former federal agents and active local and county police officers, some of whom flash their government badges when on duty for the family.

The Wilkses trace their support for Cruz back to their humble beginnings.

“America has always been a land of opportunity. It’s the one place on earth where you can go from building brick walls in the Texas heat to the kind of success my brother and I have achieved,” Farris Wilks told Reuters.

The Wilkses are not the only billionaires backing Cruz. Reclusive hedge fund magnate Robert Mercer gave $11 million; Texas energy investor Toby Neugebauer gave $10 million. Mercer has declined to comment on why he is supporting Cruz, while Neugebauer backs Cruz for his track record promoting conservative causes and opposing the federal debt.

Despite the large donations, Cruz is not among the leaders of the Republican race. A Reuters/Ipsos poll on Sept. 8 showed him in fourth place among Republican voters at 5.5 percent, tied with former Arkansas Governor Mike Huckabee and Wisconsin Governor Scott Walker.

The day after President Barack Obama won a second term, “I was pretty bummed out,” Farris Wilks told congregants in a sermon on Nov. 7, 2012, a recording of which was provided by Peter Montgomery, a senior fellow with the equal rights group People for the American Way. “I do believe that our country died that Tuesday night,” Wilks said.

Less than a year later, Farris found himself in the ballroom of the Marriott Hotel in Des Moines, Iowa, where Cruz stood with head bowed in a prayer circle, surrounded by evangelical Christians.

Cruz was among the political headliners at a Pastors and Pews conference, an annual, closed-door affair that now occurs in roughly 14 states and is organized by Christian nationalist David Lane.

The born-again Lane, a self-described former “wild man” of “drugs, wine, women and song,” believes the Bible should be the primary textbook in public schools and that judges who favor same-sex marriage should be impeached. He says people who embrace homosexual marriage, along with “pagan public schools, pagan higher learning and pagan media,” are creating America’s downfall with their “multiracial false gods.”

One of Lane’s major aims is to motivate at least 1,000 pastors to run for office in 2016. Polling shows there are 65 million to 80 million evangelical Christians but only a quarter of them vote. Getting 5 percent more registered and voting would, according to Lane, put a conservative in the White House.

Asked about the Wilks brothers’ financial support for Cruz, Lane said in an interview: “It’s God’s money. He entrusted it to them. They are being a steward. These are patriots of America trying to do something right.”

Though the election was three years off, the talk at the meeting, according to four people who attended the event, was of 2016 – and Cruz.

The Wilks family contributions have helped put Cruz in second place ($46 million) in the money race among Republicans seeking their party’s nomination for 2016. Only Jeb Bush, who has raked in a record $114.5 million, has raised more.

“They aren’t doing it to be famous or to be part of a club,” billionaire Cruz backer Neugebauer said of the Wilks. “They know that America is running out of IOUs, and they want this country’s economic opportunities to still be here for their grandchildren.”