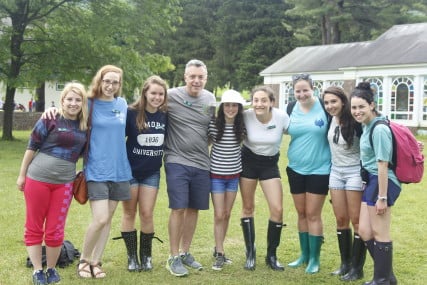 Jonah was always different from other boys. Jonah’s parents started seeing a difference in age three that made them think Jonah was gender non-conforming. By age five, Jonah was wearing girls clothes, played with toys typically geared towards girls, and had long hair. When Jonah told her parents she wanted to go by Hannah at eleven – it was hardly a surprise.

“There really wasn’t a coming out process,” Tamar Gendler, Hannah’s mother told me. “It was a natural progression.”

There were not any hurdles at home. The Gendler family was prepared to be a support system for Hannah as she transitioned socially to a girl. They wrote a letter to Hannah’s school, the synagogue, and Hannah’s summer camp – camp Eisner – to inform them about the transition.

“The synagogue switched her from the bar mitzvah list to the bat mitzvah with no problems,” Gendler said. The school did not have any issues with her transition either. The family’s worries were with Camp Eisner. It’s at camp that Hannah would have to stay overnight with other kids. Hannah had been going to Massachusetts, from her home state of Connecticut, to attend Camp Eisner since 2nd grade. However, that was as Jonah and the Gendler family was not sure if their child would be welcomed back for the summer of 2014 as Hannah.

When Louis Bordman, senior director of URJ Eisner and Crane Lake Camps, received the letter from the Gendler family, he wasn’t shocked. But he knew he had a lot to learn. Camp Eisner had never hosted an openly transgender camper. Would Hannah be able allowed to stay in one of the girls’ cabins? Will staff use female pronouns? Where will Hannah be able to shower and use the restroom?

Bordman said he went through an education process reaching out to the American Camping Association and LGBT Jewish groups like Keshet. “It was really a process to how to set ourselves up to say yes,” Bordman told me.

The camp, which hosts 1000 kids at any given point, sent a handwritten letter with transgender resources to 65 camper families – the ones with female campers in Hannah’s age group. They received back six direct responses asking to have more conversations and resources about understanding transgender kids.

Not a single family had anything negative to say and not a single person pulled their child out of camp.

“I was unbelievably impressed with the education process the camp went through,” Gendler said.

When Bordman finally met with Hannah as herself, it changed everything. “It was no different then sitting next to my own daughter, Bordman said.

“All my questions and things felt inconsequential. That was a defining moment for me,” he said. “That was the moment that I understood what it really means to be transgender. I just wanted to have a kid in camp that could be the little girl that she was destined to be.”

In the end, the camp’s board decided Hannah was most definitely welcomed back to camp and she would be housed with the rest of the girls.

But how about the restrooms?

The bathroom is always the point of contention. The idea of trans-inclusive bathrooms have caused bathroom panic for right-wing pundits who claim – with no basis in fact — that trans individuals will be sexual predators

Media Matters, a media watchdog, spoke with seventeen U.S. school districts that have trans-inclusive restrooms. Not a single district had any issues with their trans students using the restroom. And neither did camp Eisner.

“We had Hannah come the day before camp and meet all the counselors. They walked through the cabin and discussed what they would do. It took all of three minutes,” Bordman said. Hannah decided she wanted to use the counselor’s private bathroom to shower that summer. Yet, by the next summer, Hannah was using the restroom and showering facilities with all the rest of the girls.

Hannah is just like other girls her age and Camp Eisner recognized that. The brouhaha over trans people, especially trans kids, comes out of ignorance. Those who educate themselves about the trans community, as the board at Camp Eisner did, are able to welcome trans persons with open arms.

“We had another trans camper this year. We also had transgender staff this summer,” Bordman said about this past summer 2015. This time, Camp Eisner was prepared to host the transgender community.

“I won’t have to be sending out letters again to tell people,” He said. “The transgender community is part of the fabric of who we are of the openness and inclusive community we strive to create.”