The first time I visited RELEVANT Magazine’s website I was intrigued by their design and content. They had impressively illustrated articles geared to Christian millennials like myself. The sleek design accompanied with Bible-based content reeled me in and made me want to stay.

However, I quickly realized something was missing. Somehow, among the dozens of new articles on the website, RELEVANT barely mentioned the LGBT community. This was surprising, considering virtually every publication, regardless of theological background, has numerous pieces on faith and sexuality posted at any given time. It’s by far one of the most talked about topics in our country, yet RELEVANT remained relatively quiet.

Someone who is not staying quiet any longer is a former editor of RELEVANT.

Tyler Huckabee announced his support for civil marriage equality. On his blog, he explains his shift, saying that personal experiences helped him shift from a traditionalist stance. Huckabee called legal equality “a noble goal” in dignifying the humanity of LGBT people.

A source (who has declined to be named) sent me a copy of a 2011 email exchange with Ryan Hamm, the managing editor of RELEVANT at the time. In his email, Hamm told the writer that the magazine could not publish LGBT stories that were “fully in favor of gay rights.” Hamm had worked with the author before and described this piece as “really well written!” but told the author they wouldn’t publish it as RELEVANT takes a “historical, orthodox interpretation of Scripture as much as we can.”

This source is one of four writers who have told me similar stories about the publication rejecting LGBT editorial pieces.

READ: How traditional biblical views can cut off love, enlightenment and even life

In an email, Hamm told me he regrets using the term “gay rights.” He believes in a traditional understanding of sexuality while also believing the church should not “infringe on the civil rights of LGBTQ people.”

“I should have said that I could not publish pieces that were ‘religiously or theologically affirming of same-sex relationships.’ Any inference that I thought gay rights should not be advocated for by the church in terms of legal or civil protection or rights was not my intention or belief, and I apologize for being unclear.”

Hamm, who worked at RELEVANT from 2009-2012, also said he had personally advocated to publish several editorial pieces on LGBT issues without any luck.

“I had hoped to help RELEVANT craft a strong support of orthodox, biblical human sexuality combined with a strong voice for LGBTQ rights in the public square, and a strong call to welcome our LGBTQ brothers and sisters in churches,” Hamm told me in an email.

“For instance, my editorial director and I urged a public stance of support for same-sex civil marriage and proposed a cover story written by a gay Christian (who would have included multiple voices on the issue) to navigate what it means to love our LGBTQ neighbors, advocate for civil rights/protections and hold true to a historical, orthodox understanding of human sexuality,” he said. “But, at that time, the publication and the CEO were not prepared to support civil issues, or to publicly talk about what a Christian approach to same-sex attraction might be. I believe RELEVANT missed its chance to be a prophetic voice for a way forward on this. It’s something that still grieves me.”

On the rare occasions, when RELEVANT does report on LGBT events, it’s on the stories that were just too large to ignore. Reports on the suicide of trans teen Leelah Alcorn, the conversion therapy ban petition that spurned from Alcorn’s death, the closing of Exodus International, and when Rob Bell voiced his support for marriage equality are all kept short and to the point. The pieces have just enough to get the news in and not a word more. 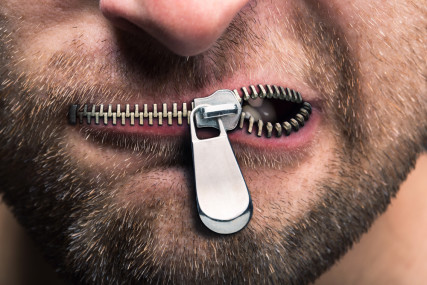 The CEO and Founder of RELEVANT magazine, Cameron Strang, is the son of Stephen Strang, publisher of Charisma magazine – a magazine that is staunchly, aggressively anti-LGBT. However,  RELEVANT is its own publication and Strang had has over 15 years of experience in media. (Though I’m sure it would be slightly awkward at thanksgiving dinner if RELEVANT posted a pro-LGBT piece.)

Before publishing this piece, I contacted Cameron Strang and spoke to him on the phone for an hour about my criticisms. Our conversation was off the record, refreshing, and I truly believe his intentions are pure. I don’t believe he was aware that RELEVANT’s silence communicated a lot to the LGBT Christian community. It was an initial conversation meant to be followed up with more dialogue. After our phone call, I sent an email to Cameron to continue our conversation. I never heard back to my follow up emails.

READ: How to be a Christian ally to LGBT people

RELEVANT’s silence on LGBT things could be what’s keeping their covers graced with A-List celebs. Stars such as Zach Galifikanis, Reese Witherspoon, and Mindy Kaling – all of whom have starred on the cover of the Christian magazine – might be less likely to grace the cover of an openly anti-LGBT publication.

Secular millennial publications do show support for the LGBT community. During the month of June, Mashable, Huffington Post, Buzzfeed were a few publications that took public stances for marriage equality. When asked if they thought it was something they should do, Ben Smith, Editor-in-Chief of Buzzfeed, took a bold, and moral stance:

“We firmly believe that for a number of issues, including civil rights, women’s rights, anti-racism, and LGBT equality, there are not two sides,” Smith told Politico.

It’s odd that a secular millennial oriented publication would take a moral stance for marginalized communities while a Christian millennial magazine keeps quiet.

Yet, RELEVANT claims to “cover life issues and culture next to social justice and spiritual growth.”

“Christians can’t be complacent living in a Christian bubble and never engaging the world they live in,” RELEVANT’s website states, explaining the story of the publication.

“We want to live the way Jesus did. Through relationship and love, the world was changed. We don’t think believers should be known primarily for legalism and bigotry. We believe in dialogue—about Truth, about faith, about freedom in Christ”

Ignoring the LGBT Christian community is not only cowardly; it is inadvertently taking a stand. It is also not the way Jesus lived. Christ repeatedly took bold stances in defense of the oppressed. As Desmond Tutu said, “If you are neutral in situations of injustice, you have chosen the side of the oppressor.”

Despite years of progress, change, and monumental shifts in the thinking of young and old evangelicals on the LGBT community, RELEVANT has attempted to stay silent.

In doing so, they have made a mockery of their name.