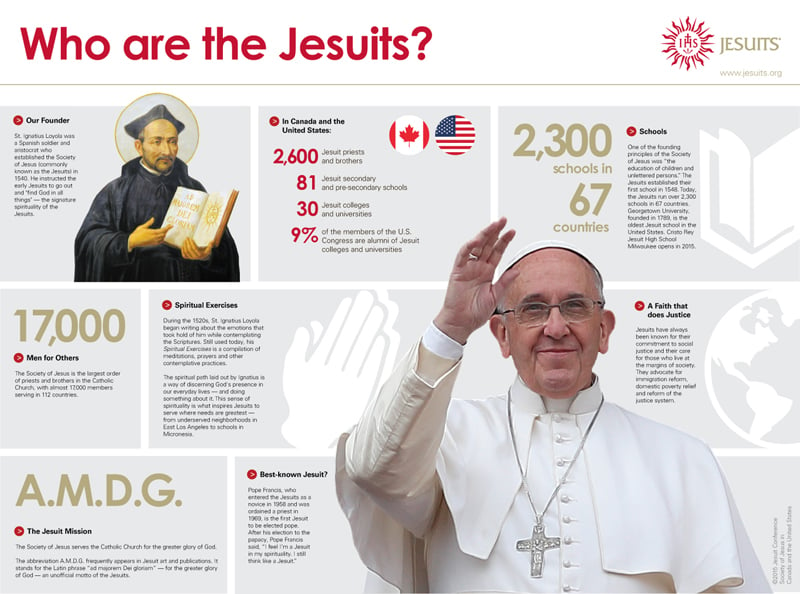 “Who are the Jesuits?” graphic courtesy of Jesuit Conference

(RNS) Figuring out why Pope Francis has upended so many expectations and what he might be contemplating for the future of the Catholic Church has become a parlor game almost as popular as the pontiff himself.

A single key can unlock these questions: Francis’ long-standing identity as a Jesuit priest.

It’s an all-encompassing personal and professional definition that the former Cardinal Jorge Bergoglio brought with him from Buenos Aires, and one that continues to shape almost everything he does as pope — even though he is the first pontiff to take his name from the 13th century Italian monk from Assisi who was famous for living with the poor and preaching to the animals.

“He may act like a Franciscan but he thinks like a Jesuit,” quipped the Rev. Thomas Reese, a fellow Jesuit who is a columnist for National Catholic Reporter.

In fact, it would be easy to mistake this new pope for a new St. Francis of Assisi, given his emphasis on helping society’s outcasts and his focus on the Christian moral duty to protect the environment.

Yet he’s also the first pope from the Society of Jesus, the religious community whose worldly-wise intellectuals are as famous as its missionaries and martyrs.

Indeed, behind that label lies a centuries-old brand of spiritual formation that includes a passion for social justice, a missionary zeal, a focus on engaging the wider world and a preference for collaboration over top-down action.

And as the first Jesuit pope, Francis brings sharply etched memories of being part of a community that’s been viewed with deep suspicion by Rome, most recently by his own predecessor, Pope Benedict XVI.

Jesuit priests are explicitly discouraged from becoming bishops, much less pope, and that outsider’s sensibility helps to explain Francis’ almost breezy willingness to dispense with centuries of closely guarded and cherished tradition.

“We never imagined that a Jesuit could become pope. It was an impossible thing,” said the Rev. Antonio Spadaro, an Italian Jesuit who conducted a book-length interview with the pope and knows him well. “We Jesuits are supposed to be at the service of the pope, not to be a pope.” Pope Francis is surrounded by children during a special audience with students of Jesuit schools in Paul VI hall at the Vatican on June 7, 2013. Photo courtesy of REUTERS/Max Rossi
*Editors: This photo may only be republished with RNS-POPE-JESUIT, originally transmitted on September 15, 2015.

What is a Jesuit?

The Society of Jesus, as it is formally known, was begun in the 1530s by Ignatius of Loyola, a Basque soldier who underwent a profound religious transformation while convalescing from war wounds. Ignatius composed the Spiritual Exercises, used to guide the Jesuits’ well-known retreats, and in 1540, along with six other theology students at the University of Paris, he won recognition from Pope Paul III as an official church order.

In many ways, the Jesuits are like other religious orders, such as the Franciscans or Dominicans. Jesuits take vows of poverty, chastity and obedience and live in community. Unlike diocesan priests, they are not ordained to a particular geographic diocese to serve the local bishop.

Jesuits are an all-male order; there are no Jesuit sisters. The society has an almost military-style structure and ethos, with shock troops willing to go wherever and whenever the church needs them. They are “contemplatives in action,” in the words of St. Ignatius, and have an especially lengthy period of study and spiritual preparation before taking vows, usually 10 years or more.

Even then, the process is not complete. After another few years, most Jesuits take a special fourth vow of obedience “in regards to mission” to the pope.

If the church needs priests to convert lost souls, the Jesuits are on it. If they are needed to bring Catholicism to new lands, such as Asia or Latin America, they’ll buy a one-way ticket. To advance the church’s mission, the Jesuits established universities such as Georgetown, Fordham and Boston College.

Despite their simple beginnings, the Jesuits remain the largest order in the Catholic Church.

In 1773, Catholic monarchs jealous of the Jesuits’ influence and independence pressured Pope Clement XIV to suppress the order, declaring the society “perpetually broken up and dissolved.” Yet in 1814, the order was restored.

In the 1960s, the Jesuits collectively opted to work for social justice and improve the lot of the poor. In the developing world, that put Jesuits on the front lines of popular movements such as liberation theology. In El Salvador, six Jesuits, along with their housekeeper and her daughter, were brutally executed by a Salvadoran military unit in 1989.

At the same time, the Vatican under Pope John Paul II — aided by his doctrinal chief, Cardinal Joseph Ratzinger — investigated, sanctioned and sometimes silenced Jesuit theologians who were considered too eager to marry the gospel to suspect social movements.

Jesuits have also fallen victim to what some call a “white martyrdom” at the hands of the pope. As recently as 2005, Thomas Reese was forced out as editor of the Jesuits’ America magazine when Ratzinger, his longtime foe, was elected Pope Benedict XVI.

What kind of a Jesuit is Francis?

As a Jesuit in Argentina, ordained in 1969, Jorge Bergoglio found himself in the midst of all this tumult.

The Argentine “Dirty Wars” erupted during the 1970s, and the violence that overtook the country also threatened many priests — especially Jesuits — even as the regime co-opted much of the hierarchy. Bergoglio was made superior of the Argentine Jesuits at the age of 36, thrust into a situation of internal and external chaos that would have tried even the most seasoned leaders.

“I had to deal with difficult situations, and I made my decisions abruptly and by myself,” Francis said last year, acknowledging that his “authoritarian and quick manner of making decisions led me to have serious problems and to be accused of being ultraconservative.”

Bergoglio fully embraced the Jesuits’ radical turn to championing the poor, though he was seen as an enemy of liberation theology.  Critics labeled him a collaborator with the Argentine military junta even though biographies show that he worked carefully and clandestinely to save many lives.

None of that ended the intrigue against Bergoglio within the Jesuits, and in the early 1990s he was effectively exiled from Buenos Aires to an outlying city.

In classic Jesuit tradition, however, Bergoglio complied with the society’s demands and sought to find God’s will in it all. Paradoxically, his virtual estrangement from the Jesuits encouraged Cardinal Antonio Quarracino of Buenos Aires to appoint Bergoglio as an assistant bishop in 1992.

“Maybe a bad Jesuit can become a good bishop,” an Argentine Jesuit said at the time.

In 1998, Bergoglio succeeded Quarracino as archbishop. In 2001, John Paul made Bergoglio a cardinal, one of just two Jesuits in the 120-member College of Cardinals.

His rise in the hierarchy, however, only seemed to cement suspicions about him among his foes among the Jesuits.

So when Bergoglio was chosen as pope in March 2013, one could almost hear the collective gasp in Jesuit communities around the world.

“The fact that he had been somewhat rejected, internally, by the Jesuits, if not for that he probably would not have become a bishop,” said the Rev. Humberto Miguel Yanez, an Argentine Jesuit like Francis who heads the moral theology department at the Gregorian University in Rome — a Jesuit school sometimes called “the pope’s Harvard.”

And if Bergoglio had not become a bishop he would not have become a cardinal and, ultimately, pope, since the College of Cardinals by tradition chooses each successor to St. Peter from among its own ranks.

“The stone that the builders rejected,” Yanez quipped, citing a well-known gospel verse, “became the cornerstone.”

What will a Jesuit pope mean for the church?

Now, of course, Francis is a “brother among brothers,” as the current head of the order, the Rev. Adolfo Nicolas, put it.

“My impression is that with his daily homilies and catechesis he is conducting a kind of Ignatian retreat with the whole church,” Austrian Cardinal Christoph Schoenborn said recently.

Francis knows how much the Jesuits are still resented by some corners in the church, and especially in the Vatican, but he has not let that alter his style.

He circumvented the usual protocols to canonize one of Ignatius’ original companions, Peter Favre, whom Francis has praised for being “in dialogue with all, even the most remote and even with his opponents.”

He lives simply, rejecting the traditional papal apartments to live in a small community inside a Vatican guest house. He also preaches forcefully that other clerics, and especially the hierarchy, should eschew the perks and privileges of their office.

Francis’ Jesuit influence extends to his mode of governance. One of his first actions as pope was to name a council of eight cardinals from around the world — none of them from the dysfunctional Roman Curia — to serve as a kitchen cabinet, much the way Jesuit superiors operate. He has used a similar model for tackling specific tasks as well, such as overhauling the Vatican’s finances.

This sort of discernment — listening and contemplating before acting — is a cardinal virtue of the Ignatian spirituality that is at the core of Francis’ commitment to a “conversion” of the papacy as well as the entire church.

But that also means that it’s hard to say exactly what will come next. Francis has repeatedly praised the Jesuit trait of “holy cunning” — that Christians should be “wise as serpents but innocent as doves,” as Jesus put it. The pope’s openness, however, also a signature of his Jesuit training and development, means that not even he is sure where the spirit will lead.

“I confess that, because of my disposition, the first answer that comes to me is usually wrong,” Francis said in a 2010 interview.

Religion Hub
Pope hopes charity match deals a “kick” to exclusion
Follow us on Facebook!
Submit your photos to RNS