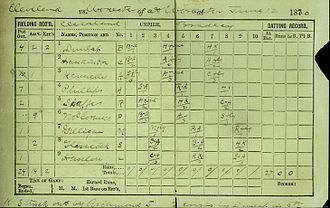 Scorecard of the first perfect game in baseball history, 1880

Church spokesmen and mainstream religion reporters like to make the point that the pope — any pope — hews not to a liberal or conservative line in secular politics, but marches to the distinctively different beat of Catholic social doctrine. And the point is sufficiently true that woe to those who deny it.

On the liberal side, I score runs on immigration, climate change, the death penalty, caring for the poor, assuring the common good, ending the culture war, and political over economic decision-making. Conservatives scored on abortion and religious liberty.

Of course, conservatives will argue that they also care about the poor. They just don’t believe in robust government programs to help them. If anyone doubts that Pope Francis was sending anything but that message, I suggest a rereading of his speech Congress. As in: “I would encourage you to keep in mind all those people around us who are trapped in a cycle of poverty. They too need to be given hope. The fight against poverty and hunger must be fought constantly and on many fronts, especially in its causes.”

For their part, liberals will insist that they too care about religious liberty. But not only did Francis pair the subject with climate change in his remarks at the White House, by making an unscheduled stop at the Little Sisters of the Poor convent, he signaled his support for their legal case against the Affordable Care Act’s contraception mandate. Lest anyone doubt that, papal spokesman Lombardi spelled it out.

The hits, of course, could be read in the smiles of the president and his family, the tears of John Boehner, the smiles and cheers of the crowds. And the error? That was Francis’ own in telling the assembled leaders of the church that they were doing a heckuva job handling the sexual abuse crisis.

Assume for the sake of argument that he decided they didn’t need a reminder that he’d pushed two of them out of office this past year for doing less than a heckuva job in that regard, or that he’s established a standing tribunal in the Vatican for dealing with those who fail to deal properly with charges of child sexual abuse against priests and other diocesan personnel.

The message to the rest of the church, and especially to those who have suffered the most, was not good. I score it, Bishops 1, Victims 0.