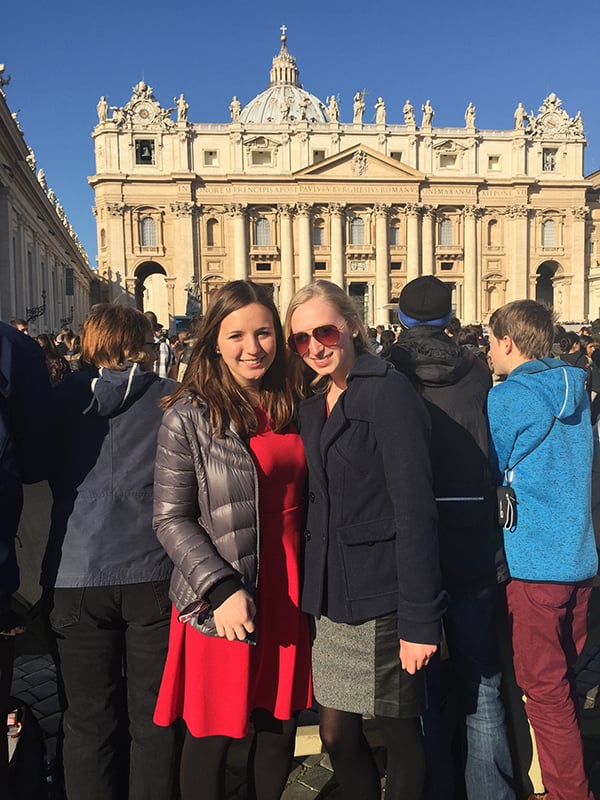 PHILADELPHIA (RNS) Earlier this year, two Villanova University students went to Rome to do social media for one of the most recognizable faces on Earth: Pope Francis.

But this week, the pope is coming to them.

Melissa Connolly and Tatum Murray, both 21-year-old seniors, spent the spring working for the Vatican’s Pontifical Council for Social Communications and its site, News.va — a site that combines the Vatican’s newspaper, radio, television and online media.

“We helped manage the site; posted on the Facebook, Instagram and Twitter accounts; gave feedback on social media; and attended papal events as part of the press,” Connolly said.

Villanova University, a Catholic university near Philadelphia, where the pope will arrive Saturday, sends up to 10 students each year to serve in different internship roles at the Vatican and other media outlets in Rome.

The internship “allows us to provide students who can be real resources to the church, as it engages in a conversation with the world about social justice, the nature of values and the kind of societies we should have — through communication and social media,” said Villanova professor Bryan Crable, who directs the program.

Click on the logo to read more coverage of the pope in the U.S.

Murray, who grew up in a non-Catholic family, said she’d coveted the Vatican internship since her first day at Villanova.

“I’m interested in social media, travel and Catholicism, so it seemed like the perfect thing,” Murray said.

The internship is also a study abroad opportunity that partners with Arcadia University in Rome. Students take classes and live in apartments alongside Italian families.

Murray said the most difficult part of the internship was producing social media content for a religious institution instead of as an individual.

“It was interesting trying to find ways to engage followers using different tactics than I can use for myself in everyday life,” she said. “We wanted to engage, but not be too informal. It was difficult finding the balance.”

Christopher Bellitto, an expert on Catholic history at Kean University, said Francis is using social media better than previous popes, but that the social media era is still young and there’s not much to compare it with.

“It would be like saying Noah built the best ark,” he said.

Villanova interns have been at the forefront of many technological developments at the Vatican, such as the creation of the pope’s YouTube channel and Twitter account.

Murray said social media is a valuable part of getting the pope’s and the Vatican’s messages out.

“Social media gives the pope a chance to engage across different generations and become accessible to people all around the world,” Murray said.

Connolly agrees that the pope’s social media presence is important.

“When you see the pope pop up on your Twitter feed, it’s like seeing one of your friends,” Connolly said.