Becky Ianni, with placard at left, and Barbara Dorris patiently wait outside the Cathedral of Sts. Peter and Paul in Philadelphia to share their stories of sexual abuse by clergymen. Both women say the positive atmosphere around Pope Francis has clouded the attention they so desperately seek for their cause. Religion News Service photo by Taylor Nakagawa

PHILADELPHIA (RNS) It’s been a frustrating week for Barbara Dorris and Becky Ianni.

On Friday night (Sept. 25), the two co-directors of SNAP: Survivors Network of Those Abused by Priests, kept a lonely vigil, trying vainly to attract attention to their cause — recognition for clergy sex abuse victims — outside the Cathedral Basilica of Sts. Peter and Paul, the site of Pope Francis’ Mass on Saturday morning.

Yet only a block away, several groups taking to the streets to fight for economic equality, an issue dear to the current pope, were able to bring together at least 300 marchers. 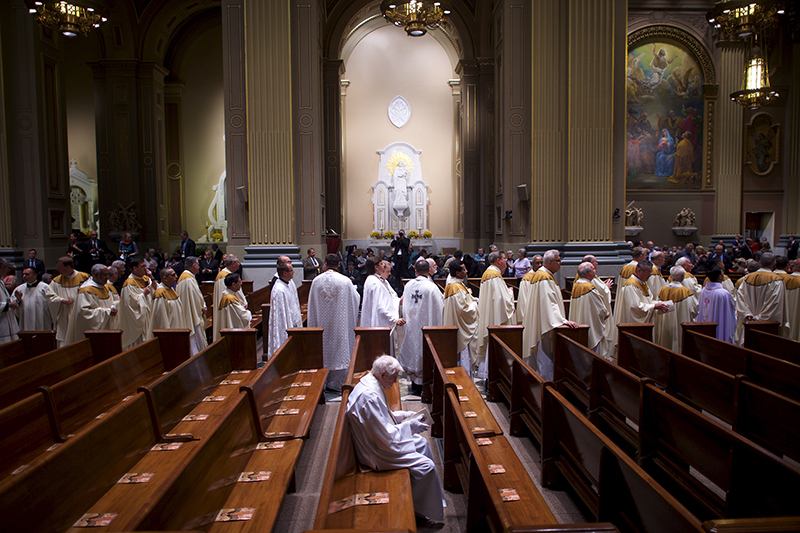 Clergy process into the Cathedral Basilica of Sts. Peter and Paul ahead of the papal Mass on Saturday morning (Sept. 26, 2015) in Philadelphia. Photo courtesy of REUTERS/Mark Makela
*Editors: This photo may only be republished with RNS-PHILLY-ABUSE, originally transmitted on Sept. 26, 2015.

“We are here because it’s going to be a very difficult week for victims,” said Ianni, who was holding a photo taken of her at nine years old, when she says she was abused by a priest. “Many victims have felt abandoned by their church, and whenever they turn on their TV this weekend they’re gonna see something about the pope.”

Ianni thinks her fight for awareness hasn’t received much attention this week because of Francis’ enormous popularity, both within the Catholic Church and outside of it.

“This pope is so well-liked that we are the negative side of that and it’s hard for people to say they think about abuse when so many people love this pope,” Ianni said.

Standing at Ianni’s side, Dorris said she wants to raise awareness about clergy sex abuse and call attention to what she sees as Francis’ lack of recognition of its victims. Earlier this week, Francis addressed bishops in Washington, D.C., on the issue and generally commended them for their handling of the years-long crisis.

“The message is very clear,” Dorris said. “If you protect these people you will be rewarded, not punished.”

Some expect Pope Francis to meet in Philadelphia with a small group of clergy sex abuse survivors, but the time and place have not been made public, nor have plans for such a meeting been confirmed.

Click on the logo to see more Religion News Service coverage of the pope’s visit to the U.S.

Across Logan Square, a social advocacy group called POWER rallied against low wages, police brutality, mass incarceration and other social ills. People participating were from a variety of religious and ethnic backgrounds.

Bishop Dwayne Royster, founding pastor of Living Water United Church of Christ in Philadelphia, was at the forefront of the action.   “We’re lifting up many of the same themes as Pope Francis,” Royster said, adding that he took to the streets for one reason.

The POWER march moved through the streets of Philadelphia — many of them closed to traffic for the papal visit — with stops at various sites organizers chose to highlight their issues — a police station, a fast-food restaurant and a jail.

The Rev. Cassandra Gould, an African Methodist Episcopal Church pastor from Jefferson City, Mo., who came to see the pope, was marching with them.

“Today’s goal was to show the intersection of justice that the pope preaches,” she said.