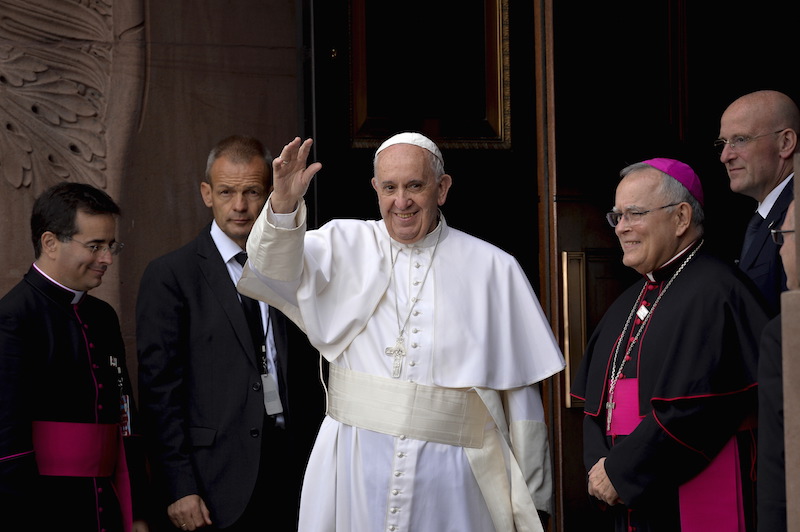 Pope Francis waves to the crowd in Philadelphia as he arrives for Mass at the Basilica of Sts. Peter and Paul on Saturday (Sept. 26, 2015). Photo courtesy of REUTERS/Charles Mostoller *Editors: This photo may only be republished with RNS-POPE-PHILLY, originally transmitted on Sept. 26, 2015.

PHILADELPHIA (RNS) At his start of the final weekend of his nine-day visit to Cuba and the U.S., a weary Pope Francis urged bishops, priests and nuns to continue to rebuild the faith here through personal works of service, just as previous generations had done in establishing the city’s venerable Catholic community.

But faced with the reality of a church that has been racked in recent years by clergy sex scandals, defections from the pews and financial hardships, he also called on them to be more collaborative than ever in their ministry, not building walls but “breaking them down.”

“This will require creativity in adapting to changed situations, carrying forward the legacy of the past not primarily by maintaining our structures and institutions, which have served us well, but above all by being open to the possibilities which the Spirit opens up to us and communicating the joy of the gospel, daily and in every season of our life,” Francis said in his homily at morning Mass in the Cathedral of Sts. Peter and Paul. Pope Francis celebrates mass at the Cathedral Basilica of Saints Peter and Paul in Philadelphia, on September 26, 2015. Photo courtesy of REUTERS/Tony Gentile
*Editors: This photo may only be republished with RNS-POPE-PHILLY, originally transmitted on Sept. 26, 2015.

Philadelphia, with about 1.5 million Catholics, is known as the quintessential “bricks-and-mortar” archdiocese, where generations of immigrants built a formidable network of parishes and schools, and where a tradition-minded clergy fostered a “pay, pray and obey” culture that seemed eternal.

Yet the clergy sex abuse scandal of the past decade changed all that, suddenly and precipitously. When Archbishop Charles Chaput was named to take over the archdiocese in 2011, much of the focus was on his reputation as a conservative culture warrior.

But Chaput has spent much of his time overhauling the archdiocese’s finances and infrastructure, closing parishes and schools built by his predecessors, who had been nicknamed “God’s Bricklayers” for their efforts. Chaput has also been struggling to finance this papal visit and the global conference on Catholic families that preceded it this week.

In his talk on Saturday morning (Sept. 26), the 78-year-old Francis, speaking in his native Spanish, provided his own blueprint for reconstruction — namely, dedicated Catholics going out to show their faith through works.

He pointed in particular to the central role of women in passing on the faith, even as he indicated that as the clergy opens to a shared ministry with lay people, women’s roles would not grow to encompass ordination, as some American Catholics would like. 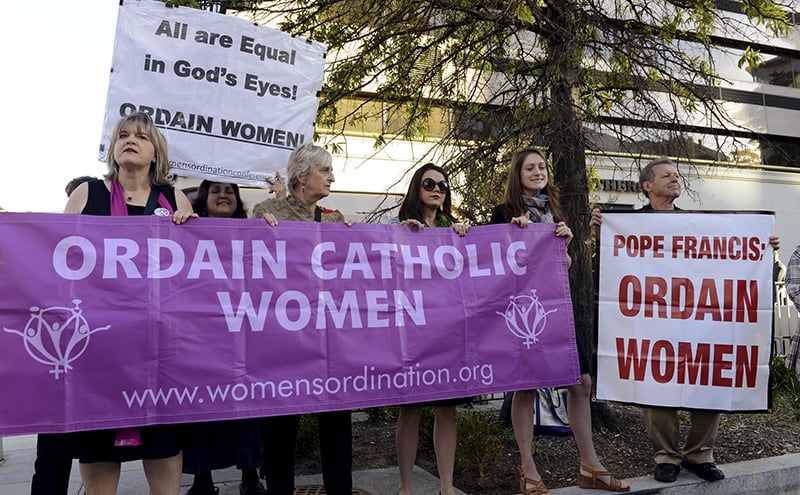 Demonstrators calling for the Catholic Church to include women priests gather prior to the arrival of Pope Francis at the Cathedral of St. Matthew the Apostle, for a prayer service and meeting with U.S. bishops, in Washington, on September 23, 2015. This is the first visit ever to the U.S by the pontiff. Photo courtesy of REUTERS/Mike Theiler
*Editors: This photo may only be republished with RNS-POPE-PHILLY, originally transmitted on Sept. 26, 2015.

“Our challenge today is to build on those solid foundations (of the past) and to foster a sense of collaboration and shared responsibility in planning for the future of our parishes and institutions,” Francis told a congregation made up mainly of bishops, priests and nuns.

“This does not mean relinquishing the spiritual authority with which we have been entrusted,” the pope said, referring to church teachings on the final authority of the all-male priesthood. “(R)ather, it means discerning and employing wisely the manifold gifts which the Spirit pours out upon the church.

“In a particular way, it means valuing the immense contribution which women, lay and religious, have made and continue to make, to the life of our communities.”

In his homily, Francis pointed in particular to a famous 19th-century Philadelphian, St. Katharine Drexel, a wealthy heiress who financed many Catholic causes, including missions to Native Americans and African-Americans.

When Drexel and her sister visited Pope Leo XIII in 1887, they asked for missionaries to go out West, and Leo surprised them by suggesting they become missionaries themselves. “What about you?” Leo asked them. “What are you going to do?” 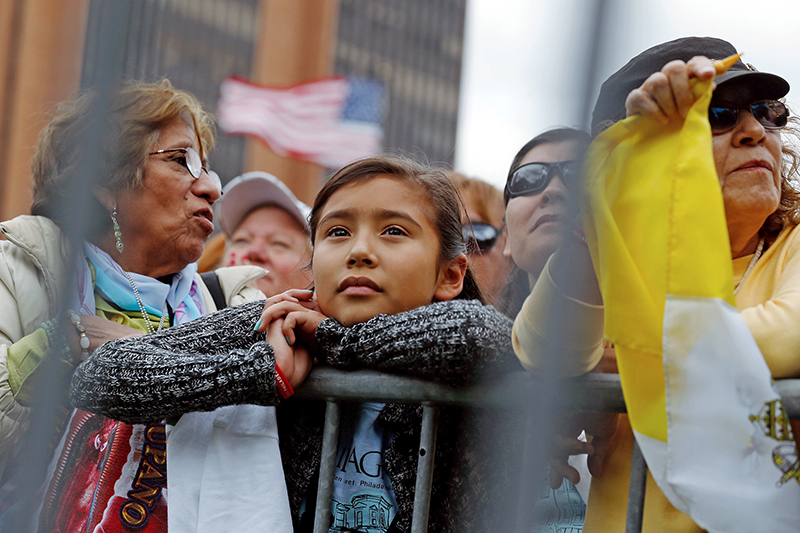 Attendees, waiting hours to hear Pope Francis speak at Independence Hall later in the day, watch on large screens as he celebrates mass at a nearby cathedral in Philadelphia, Pennsylvania on September 26, 2015. Photo courtesy of REUTERS/Jonathan Ernst
*Editors: This photo may only be republished with RNS-POPE-PHILLY, originally transmitted on Sept. 26, 2015.

That moment changed Drexel’s life; she stunned Philadelphia high society by giving away her inheritance, becoming a nun and establishing her own religious order.

Francis put the same question to the congregation on Saturday, though he may have had another audience in mind as well — the wealthy American Catholics who have openly complained about the pope’s blasts at income inequality and the “evils” of modern-day capitalism.

Francis began this trip in Cuba a week ago, and the U.S. leg of the visit started in Washington on Tuesday afternoon before moving on to New York on Thursday evening. Francis had two other events on Saturday and was to end his trip with a busy Sunday schedule capped by an outdoor Mass on the Benjamin Franklin Parkway on Sunday afternoon.

That grand finale was expected to draw upward of 1 million people — though concerns about weather, heavy security that has irked the Vatican, and scare stories about the size of the crowds may reduce that number.