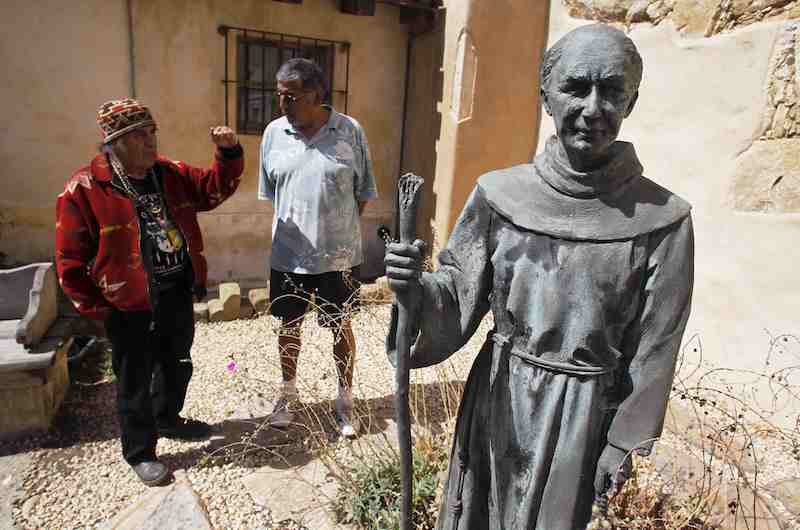 Chief Tony Cerda (L) of the Costanoan Rumsen Carmel Tribe of the Ohlone Nation and Rudy Rosales, Tribal Chairperson of the Ohlone Costanoan Esselen Natio, stand next to a statue of Franciscan Friar Junipero Serra at the Carmel Mission in Carmel, California, in this file photo taken September 15, 2015. Vandals in California on Sunday toppled a statue of Junipero Serraat the Catholic mission in Carmel where he is buried. Photo by Michael Fiala courtesy of Reuters

(Reuters) – Vandals in California toppled a statue of Junipero Serra, who was canonized last week by Pope Francis, and threw paint on tombstones and walls at the Catholic mission in Carmel where the controversial 18th-century Spanish friar is buried, the mission said.

The Carmel Mission Basilica said in a statement on Sunday that the vandalism was discovered inside the entrance courtyard by employees, and had taken place earlier that day.

Local television channel KSBW-TV broadcast images of the fallen statue of Serra, doused with green paint, and the words “saint of genocide” scratched into the base where it had stood.

“Apparently a person or persons broke in, splattered paint and toppled down the courtyard statue of Saint Serra and other historic statues on display,” the Carmel Mission said on Facebook, adding that staff and police were investigating.

“Pray that the people who did this take responsibility for their actions on this sacred property and that they seek reconciliation,” the statement said.

A representative of the Carmel Police Department did not immediately respond to a request for comment.

The mission thanked volunteers who helped clean up from the vandalism. “Let us remember that we live in a loving community, and let us not be discouraged by such things,” it said. “As Saint Serra said, ‘Always look forward, never back.'”

The Franciscan missionary is remembered by admirers as the “Apostle of California,” but he is accused by Native Americans of helping to eradicate their culture.

Serra arrived in what is now San Diego in 1769 and founded nine of the 21 Spanish missions that grew into modern-day California. Many streets and buildings in the most populous U.S. state bear his name.

Critics say Serra essentially imprisoned Native Americans in closed communities, where he suppressed their cultures and had them beaten as he tried to indoctrinate them in Roman Catholic beliefs and customs. Supporters acknowledge corporal punishment was used but contend it was common practice at the time.

His canonization by the pope at the Basilica of the National Shrine of the Immaculate Conception last Wednesday was the first canonization ceremony carried out on U.S. soil.

Francis, who was born in Argentina, said on a summer visit to Latin America that “many grave sins” had been committed against Native American people in God’s name, but insisted last week that Serra had stood up for his missions’ residents.