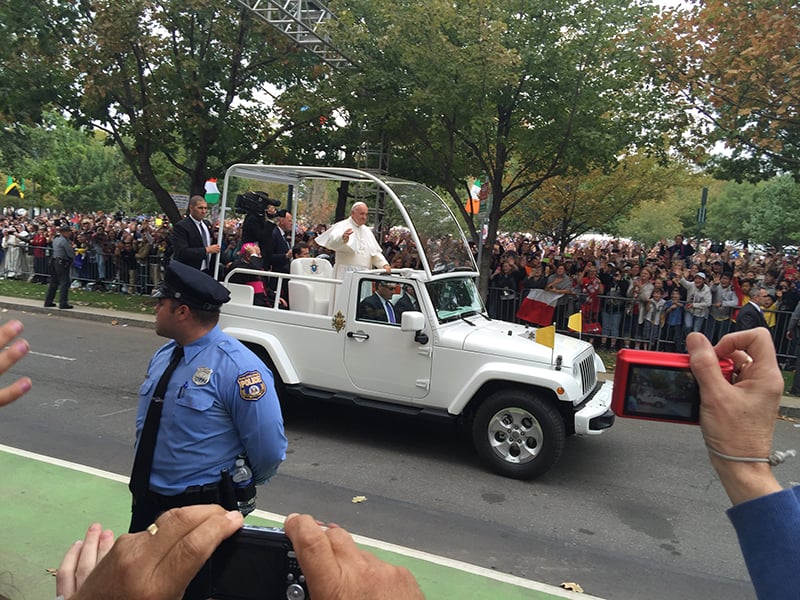 Pope Francis passes the crowd along the street of Philadelphia on September 27, 2015. Religion News Service by Kimberly Winston

(RNS) Pope Francis’ visit to the United States last week was a huge hit with the media and with the public. This week, Americans may have wondered whether he would provide ongoing unity and inspiration for our public discourse, or whether we would return to culture warring and ideological sniping.

Liberals inside and outside the Catholic Church noted that the pope made only brief allusions to abortion and same-sex marriage but spoke at length about immigration, climate change and economic inequality.

Yet as progressives were ebullient, news broke Tuesday (Sept. 29) that Pope Francis met privately with Kim Davis, the Kentucky county clerk who refuses to sign marriage licenses for same-sex couples.

Davis was in Washington to receive an award at a gathering of religious right activists. Vatican officials requested the meeting, which took place inside the Holy See’s U.S. embassy on Thursday  before the pope departed for New York. Pope Francis gave Davis, an ex-Catholic, two rosaries. They pledged to pray for each other.

This meeting challenges a media narrative — one in which I am complicit — that Davis is too fringe a figure and the pope too gracious a leader for the two to have much in common.

But this odd couple shares several convictions that we would do well to remember. They believe that homosexual expression is sinful, that marriage is between a man and a woman and that people should be free to live in accordance with those convictions.

When she was in the headlines earlier this month, sensible traditionalists tread cautiously with Davis. They know that religious freedom isn’t a trump card. Her strongest support came from less reflective political and religious figures. A rally held on her behalf drew angry protesters with offensive signs.

But the Davis case illustrates two important ways that social conservatives are struggling to formulate appealing and coherent statements of their positions in response to the rapidly changing cultural and legal affirmation of LGBT rights.

First, conservative Christians must articulate a teaching on when to acquiesce to the legal reality of same-sex marriage, when to resist and on what grounds. There is a serious lack of consensus in both Catholic and evangelical circles.

If a magistrate is a Christian, is his or her conscience necessarily offended by serving as a civil functionary to a same-sex marriage? Is it a sin to sign a marriage license for a same-sex couple? Is it a sin to refuse? Neither Catholic nor Protestant leaders unanimously agree on what a traditionalist Christian must do.

Evangelicals, who are much less supportive of gay rights than Catholics, could interpret Pope Francis’ meeting with Davis as a signal that Christians in professional settings should be free to stand in the way of gay couples whenever possible.

Second, the Davis situation arose and escalated because the debate about conscience protections for courthouse clerks was unresolved. When a gay couple encountered a clerk absolutely determined to deny their civil rights, it was unclear what, if any, legal recourse Davis had.

In the end, I think traditionalists will agree that it is not a sin to sign a same-sex couple’s marriage license, that the Christian conscience is not offended in doing so and that obstinate refusals to serve do Christianity more harm than good.

READ: No Francis effect on Georgia pardons board

And while people will debate the meaning of the pope’s meeting with Davis, I think his support is less a specific endorsement of her lawless and discriminatory actions as clerk than a general affirmation of conscience rights.

Pope Francis knows about the fundamental value American society places on civil rights. But he stands in a tradition that makes generous accommodation for conscience rights and conscientious objectors to what the church sees as social evils.

Still, Francis has arguably lent his considerable moral authority to social conservatives whose top public policy priority is to refuse to acknowledge same-sex marriage. Three weeks ago, Davis drew most of her support from fundamentalists and a few evangelicals. The United States Conference of Catholic Bishops was silent. Now, Davis claims the support of the most compelling religious leader in the world.

Social liberals who, inexplicably, think the pope is on their side of marriage and sexuality debates received a much-needed reality check.

Conservative Catholics often complain that Pope Francis, especially in his unscripted moments, sows confusion. Now, for a change, progressives are grappling with that frustration.

Days after the papal plane landed in Rome, Pope Francis is still challenging our rigid ideological frameworks. In meeting with Davis, he signals to traditionalists that he has not forgotten about their concerns.

Davis is a cultural lightning rod who has drawn comparisons to civil rights icon Rosa Parks and to segregationist governor George Wallace. Yet this pope of surprises met Davis with a hug, a gift and a prayer. Agree or disagree with Davis, Pope Francis continues to model grace and generosity in ways that confound and challenge us.