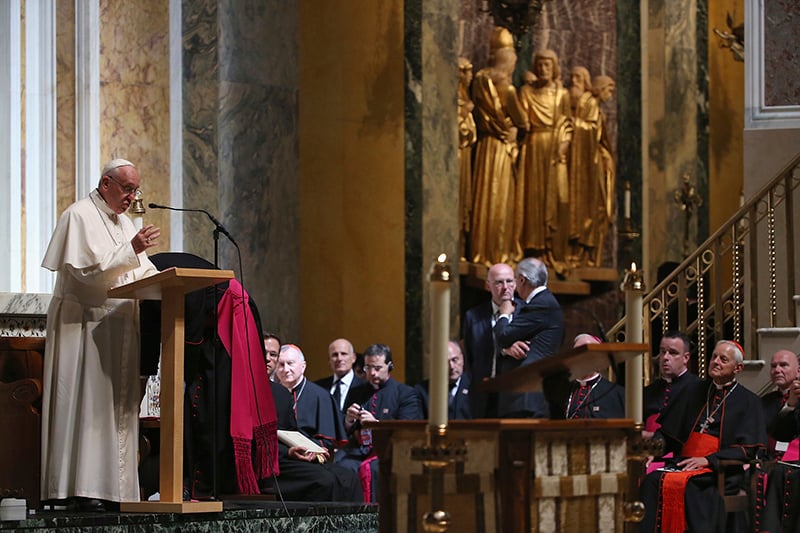 (RNS) As Pope Francis zipped around the East Coast during his U.S. visit last week, his words on confronting sexual abuse were all over the map as well — from praising bishops at the start to warning them at the end after a private meeting with victims.

Why the shifting tenor of remarks?

On his first full day of the visit, Francis praised U.S. bishops for their “courage” in facing the difficult moments of the explosive clergy abuse scandal “without fear of self-criticism and at the cost of mortification and great sacrifice.”

Listeners, however, were shocked, mindful that the church has spent hundreds of millions in settlement payouts — often after years of protracted legal fights — to compensate for decades of bishops who protected, even promoted, abusive priests.

He sounded “tone-deaf,” said Vatican expert the Rev. Thomas Reese. “Our suffering as priests is nothing like what these poor kids (the victims) or their families went through.”

But church historian Matthew Bunson calculates that Francis was speaking to a new generation of bishops who were cleaning up the mess from their predecessors. The bishops who failed to protect their flocks are long gone — dead or retired.

READ: Pope Francis came to praise, to provoke — and to bless

Bunson, editor of The Catholic Almanac, estimated that less than 10 percent of the 300 bishops who were gathered at St. Matthew’s Cathedral in Washington to hear the pope on Sept. 23 were bishops in 2002 when the scandal erupted.

However, one who was — Cardinal Roger Mahony, retired archbishop of Los Angeles — was sitting front and center alongside others with “dodgy” records, said Terry McKiernan, president of BishopAccountability.org, a website that tracks bishops who some say have failed to protect youth.

“He seemed to be ‘silo-ing’ his audience — not realizing that people from outside this particular silo, the U.S. bishops, would be listening and responding,” said McKiernan.

Much of what Pope Francis had to say about abuse was packed into the final day of his visit, spent in Philadelphia, and on the plane back to Rome.

He began that day praying privately with five victims reportedly abused by clergy or teachers or family members. The U.S. Conference of Catholic bishops has long stressed that the horrors of child sex abuse are not exclusive to the church and that other sources in civil society and in the family share blame.

Francis told victims “words cannot fully express my sorrow for the abuse you suffered.” To those abused by clergy, he apologized for all the years their claims were ignored or denied.

“I pledge to you that we will follow the path of truth wherever it may lead. Clergy and bishops will be held accountable when they abuse or fail to protect children.”

Bunson called this a “spiritual compassionate moment” that was “everything you could ask for in a public expression of shame and regret.”

Reese, however, thought that by including people who were not abused by clergy, the Vatican played into the Catholic bishops’ narrative of shifting blame from the church to a wider society. “Bad optics,” he said. 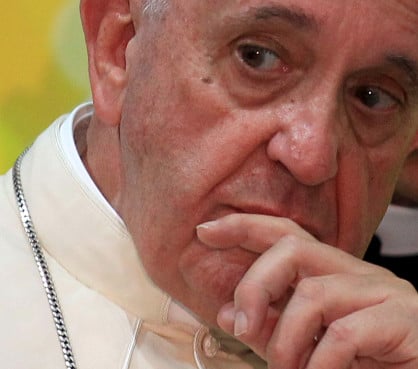 Pope Francis stepped up the pressure on bishops who fail to protect young people. Photo by Dado Ruvic courtesy of Reuters

Then, the pope took a sharp change in tone on the topic. When Francis addressed international bishops gathered in Philly for the World Meeting of Families, he went off script to tell them about his encounter with the five victims and to vow accountability for the church.

“I remain overwhelmed with shame that men entrusted with the tender care of children violated these little ones and caused grievous harm. I am profoundly sorry. God weeps,” Francis told them.

This was critical, said Reese. “Some of those international bishops still think of abuse as an American problem or a ‘First World’ problem. For the pope to make a big deal of cracking down on this to this group was very important. These bishops would all go home and tell the bishops in their country what the pope said and to take it seriously.”

They already should know. Pope Francis has set up a commission, led by Cardinal Sean O’Malley, archbishop of Boston, to create mechanisms to strike at the heart of the clergy sex abuse scandal — accountability for bishops.

Earlier this year the pope established a Vatican commission — which includes two victims of clergy abuse — to set policies for the wider church, and in June he set up a Vatican tribunal to judge and possibly discipline bishops who cover up for abusers, a first.

If no one got the message, Pope Francis laid it out clearly during his flight back to Rome. He told reporters that clerical abuse is “nearly a sacrilege.”

“For this reason the church is strong on this and one must not cover these things up. Those who covered this up are guilty. Even some bishops who covered this up, it is a terrible thing,” the pope said, according to Vatican Radio.

Francis knows there are still bishops out there in the world “who are failing to show oversight,” said Bunson, who has written biographies of both Francis and his predecessor, retired Pope Benedict XVI.

Bunson said it’s “maddening” that the church moves at what appears to be a slow pace. But the move toward zero tolerance for abuse or for any cover-up of it is picking up speed. And the pope is signaling to the world’s bishops: “He wants them on board. Now.”