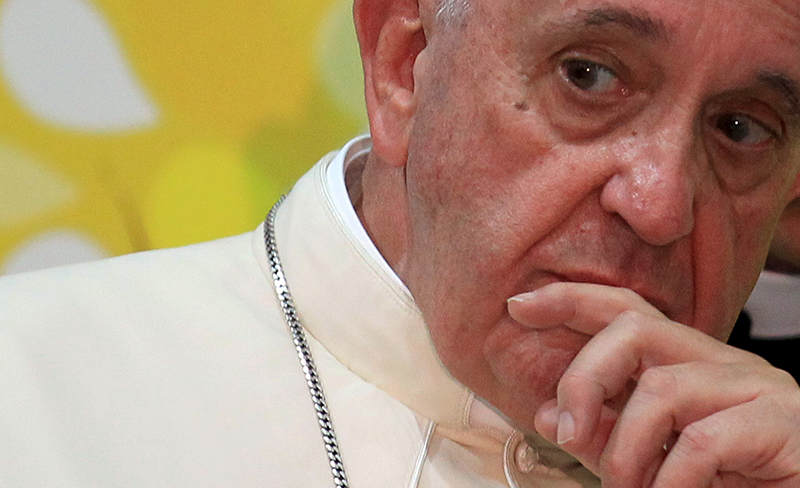 Pope Francis speaks with young people in a youth center dedicated to St. John Paul II during his visit to Sarajevo on June 6, 2015. Photo courtesy of REUTERS/Dado Ruvic
*Editors: This photo may only be republished with RNS-POPE-ABUSE, originally transmitted on June 10, 2015.

(RNS) Pope Francis has approved the first-ever system for judging, and possibly deposing, bishops who fail to protect children from abusive clerics, a major step in responding to Catholics who have been furious that guilty priests have been defrocked while bishops have largely escaped punishment.

The five-point plan on accountability for bishops originated with the special sex abuse commission that Francis set up to deal with the ongoing crisis. After some modifications, his nine–member Council of Cardinals unanimously signed off on it this week and Francis gave his final blessing to it on Wednesday (June 10).

“I’m really pleased the Commission proposal has been approved by the Pope,” Marie Collins of Ireland, one of two victims of sex abuse by clergy who sit on the Pontifical Commission for the Protection of Minors, wrote in an email.

“I sincerely believe this is a real step forward. I know some will be skeptical but hopefully time will tell and we will see real progress,” she said, adding: “The Commission still has a lot of work to do but this is an important first step.”

Peter Saunders of England, the other victim on the commission, also called the new system “good news,” telling the Catholic news site Crux that “this is a positive step that clearly indicates that Pope Francis is listening to his commission.”

Saunders’ support is especially notable because he has said that if the pope did not institute a reliable system for holding bishops’ feet to the fire he would leave the panel.

Saunders is also  currently embroiled in an ugly verbal tussle with Cardinal George Pell, the pontiff’s top financial reformer, whom Saunders has accused of being “almost sociopathic” in his handling of clergy sex abuse when Pell served as a bishop in Australia.

The Vatican has defended Pell, a blunt-talking churchman who is expected to return to Australia to testify before a government commission investigating the church’s abuse history.

Victims advocates in the U.S., who for years led efforts to break the clerical wall of silence on abuse, took a much more skeptical stance on the new moves.

“This move will give hope to some,” Clohessy said. “But hope doesn’t safeguard kids. Punishing men who endanger kids safeguards kids. That should have happened decades ago. … That’s not happening now. And that must happen — strongly and soon — if the church is to be safer.”

A test case for the new system might be in Minnesota, after a county attorney last week filed criminal charges against the Archdiocese of St. Paul and Minneapolis. The criminal charges were a first against an archdiocese, and allege that church leaders failed to protect children from molestation by a cleric.

While the current head of the archdiocese, Archbishop John Nienstedt, was not charged, officials say he could be as the investigation proceeds. But whatever happens in that case, the record indicates that Nienstedt failed to take action against the priest as recently as 2012 — which could violate church policies.

It is hard to overstate how groundbreaking this move could be.

“The pope’s decision to hold bishops accountable for mishandling sex abuse cases is a long-overdue and indispensable step in fighting abuse,” said the Rev. James Martin, an editor at the Jesuit weekly America and a widely followed commentator on church affairs.

Until now, Catholic bishops have only been answerable directly to the pope, who has the sole power to appoint them and also to fire them.

But popes have been loathe to depose bishops over shielding molesters, and the process for deposing a bishop was so murky that it was often easier for the Vatican to shuttle a bishop to a ceremonial post or wait for him to retire.

In April, Bishop Robert Finn of Missouri, who three years earlier became the first bishop convicted of failing to report a priest suspected of child abuse, was forced to resign, effectively the first bishop in the decades-long  crisis who lost his job for covering up for an abuser.

But Finn’s resignation only came after years of outrage among Catholics and, in the end, lobbying by some fellow bishops, most notably Boston Cardinal Sean O’Malley, a member of the pope’s personal council of nine cardinals and head of the papal sex abuse commission.

The commission was announced in December 2013 and officially created in March 2014. Apart from O’Malley, it currently has 17 members: 10 laypeople (including six women and two survivors of sexual abuse), plus five priests and two nuns.

O’Malley has long backed a system for judging bishops who failed to stop abusive clerics, and this new system has the hallmarks of his approach.

The main feature of the new system will be a tribunal — effectively a church court — set up in the Congregation for the Doctrine of the Faith, the powerful Vatican department that oversees orthodoxy and has also become the clearinghouse for judging priests accused of abuse.

The new tribunal will “judge bishops with regard to crimes of the abuse of office when connected to the abuse of minors.” The pope is expected to name a special prosecutor and a staff for the tribunal in the coming months, perhaps before he arrives in late September for his first trip to the U.S., which has been ground zero in the clergy sex abuse crisis.

Several gray areas remain: For example, the new protocols do not say who is responsible for reporting bishops to the Vatican, and how such complaints will be filed and handled.

Still, Vatican observers say Francis has set up the new system quickly, given the glacial pace at which the Roman Curia usually operates. And he seems to want to go around many of the usual bureaucratic and canonical roadblocks to establish a relatively simple and independent tribunal.