Australian Cardinal George Pell arrives for a meeting at the Synod Hall in the Vatican March 6, 2013 ahead of the conclave that elected Pope Francis. Photo by REUTERS/Tony Gentile .
*Editors: This photo can only be used with RNS-PELL-ABUSE, transmitted May 22, 2015 or RNS-PELL-VATICAN on June 1, 2015.

VATICAN CITY (RNS) The Vatican threw its support behind its financial chief, Cardinal George Pell, on Monday (June 1), after he was accused of being “almost sociopathic” in his handling of clergy sex abuse by a leading member of a papal commission dedicated to tackling the issue.

The Vatican spoke out after commission member Peter Saunders, who was abused by a priest as a child, claimed Pell had not done enough to tackle pedophile priests when the cardinal was Australia’s leading cleric.

“I think it’s critical that George Pell is moved aside, that he is sent back to Australia, and that the pope takes the strongest action against him,” Saunders told Australia’s Channel Nine. Saunders also said Pell had behaved in an “almost sociopathic” way. 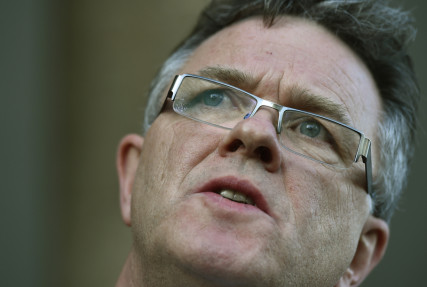 Peter Saunders, chief executive of the National Association for People Abused in Childhood, speaks to journalists outside Millbank Tower in central London on October 31, 2014. Photo courtesy of REUTERS/Toby Melville
*Editors: This photo may only be republished with RNS-VATICAN-PELL, originally transmitted on June 1, 2015.

But the Vatican’s spokesman, Federico Lombardi, said Saunders was speaking individually and not on behalf of the 17-member commission.

The Vatican’s commission “is not competent to investigate or to pronounce specific judgments on individual cases,” Lombardi said. He pointed to a recent statement by Pell on the issue and said it “must be considered reliable and worthy of respect and attention.”

A representative for Pell said the cardinal was seeking legal advice over the “false and misleading claims” made by Saunders, whom he has never met.

An Australian royal commission set up to investigate child sex abuse requested Pell attend the inquiry, following mounting pressure on the cardinal to testify in person.