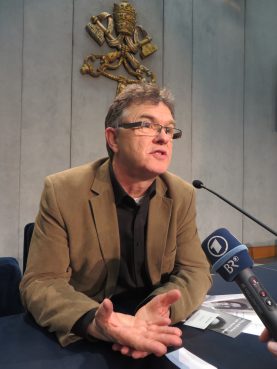 Peter Saunders of Great Britain is a member of the Pontifical Commission for the Protection of Minors. Saunders, who was abused by priests as a boy, spoke at a Feb. 7 news conference at the Vatican on Pope Francis’ efforts to hold bishops accountable for abusers.

VATICAN CITY (RNS) A papal commission on clergy sex abuse is close to giving Pope Francis recommendations on how to punish bishops who shield priests suspected of misconduct, one of several moves announced Saturday (Feb. 7) that are encouraging the two victims on the panel.

But the two victims also said the Vatican has a year or two at most to implement policies with teeth, otherwise they will leave.

Peter Saunders of Great Britain, who was sexually assaulted as a boy by priests at his Catholic school, told a crowded news conference at the Vatican press office that he came to the meeting “with a fair degree of trepidation” that anything significant would result.

But after the initial two days with what he called a “group of quite remarkable and determined people,” including Boston Cardinal Sean O’Malley, head of the commission, he said “the trepidation has kind of disappeared.”

“I’m actually very, very hopeful that there are going to be some very significant things happening,” especially on disciplining bishops, said Saunders, who heads the London-based National Association for People Abused in Childhood.

But he warned that “if in a year or two there isn’t some firm action on those matters then I don’t think I’ll be sitting here talking to you.”

“We’re not here for lip service. We’re here to protect our children,” said Saunders, who has been outspoken in his demands that the Vatican move quickly.

The other victim on the commission, Marie Collins of Ireland, has been equally vocal in pressing Rome to move quickly and firmly to enact policies and discipline bishops, and she echoed Saunders’ remarks.

“I would expect something to come into place, and if it doesn’t happen in the next year or two, I think not only will Peter not be here, nor will I,” she said.

O’Malley, a close adviser to Francis who has been pushing for bishops to be held accountable, said he is convinced the pope will implement policies with “consequences.”

“There needs to be procedures that will allow these cases to be dealt with in an expeditious way, rather than just having things open-ended,” said O’Malley, who sat with Saunders at the press conference, which was attended by most of the other commission members.

The press conference was one of a rapid series of moves by the Vatican to try to respond with greater speed to the demands that it move quickly on this issue.

Francis issued a strongly-worded letter on Thursday (Feb. 5) telling the world’s bishops to heed the commission’s work and to make protecting children a priority.

At Saturday’s press conference, O’Malley added that he was now calling on the hierarchy in every country to establish a contact person to communicate with the commission and he reiterated the Vatican’s previous demand that each bishops’ conference establish guidelines for reporting abuse. Almost all had done so, he said, but some had not and other policies were inadequate.

O’Malley also said that the commission is developing an educational program on abuse for newly-appointed bishops and members of the Roman Curia, and it is developing materials for a Day of Prayer for all those who have been harmed by sexual abuse.

The commission will also seek researchers to explore the causes of abuse, and said they will look at issues specific to the priesthood, such as celibacy, seminary screening and education. Marie Collins, center, spoke to reporters after a Feb. 7 news conference at the Vatican. Collins, of Ireland, was sexually assaulted by a priest as a girl. She is a member of Pope Francis’ Commission for the Protection of Minors.

As for punishing bishops, the most sensitive aspect of the scandal, Collins said that the commission was formulating a range of possible sanctions.

She declined to address them in detail but said that if the measures they are discussing are put in place “it will certainly answer the issue” of accountability of bishops. It is a “very high” priority for the commission, she said.

Collins was one of the original eight panel members Francis appointed last May as he was facing growing criticism for moving quickly on myriad other church reforms while appearing to act much more slowly on fighting clerical abuse, which is a priority for Catholics in the U.S.

That preliminary group met three times, and then last December Francis added nine more members, including Saunders and a range of lay and clergy experts, as well as two nuns. The pontiff also expanded the geographic reach of the commission, which had been largely European.

Noticeably absent from the panel, however, are any victims from the U.S., and especially the Survivors Network of those Abused by Priests, or SNAP, the leading victims advocacy group.

Saunders said he told the group that SNAP had to be part of the conversation because “they are the biggest and they are the most vociferous” of the victims groups. He said that when he mentioned SNAP to the rest of the commission members “I think there was a tinge of, ‘Oh, God!’” But he said there was no resistance to the idea and he expected the commission to contact SNAP.

SNAP leaders have been highly critical of Francis’ efforts and have dismissed the commission as window dressing.

In an email Saturday, the group’s national director, David Clohessy, said that he wasn’t exactly sitting by the phone.

“We’ve been around 25 years and can count on maybe two hands the number of Catholic officials who have asked to hear from us, so we’re not holding our breath waiting for a call from the Vatican,” Clohessy wrote.

“For years and years, Catholic officials have almost universally shunned survivors or met only with a tiny handful of carefully chosen survivors in choreographed public relations events,” he said. “So the chance that we’ll be have any real chance to talk with or influence the church hierarchy seems slim.”

In a related development on Saturday, Saunders and Collins also said the commission has a working group on corporal punishment and they chided Francis for his remarks earlier in the week that seemed to say it was okay for parents to spank their children.

“One time, I heard a father say, ‘At times I have to hit my children a bit, but never in the face so as not to humiliate them,’” the pope said last Wednesday. “That’s great,” Francis continued. “He had a sense of dignity. He should punish, do the right thing, and then move on.”

The comments prompted an intense debate, and Saunders said that while the remarks “just proved his humanity and his normalcy,” he wanted to have a chance to tell Francis how wrong he was.

“I think we need to talk to the pope about this issue because there are millions of children around the world who are physically beaten on a daily basis,” Saunders said. “It might start out as a light tap but the whole idea of hitting a child is abut inflicting pain … Physical violence has no place in a modern day upbringing.”