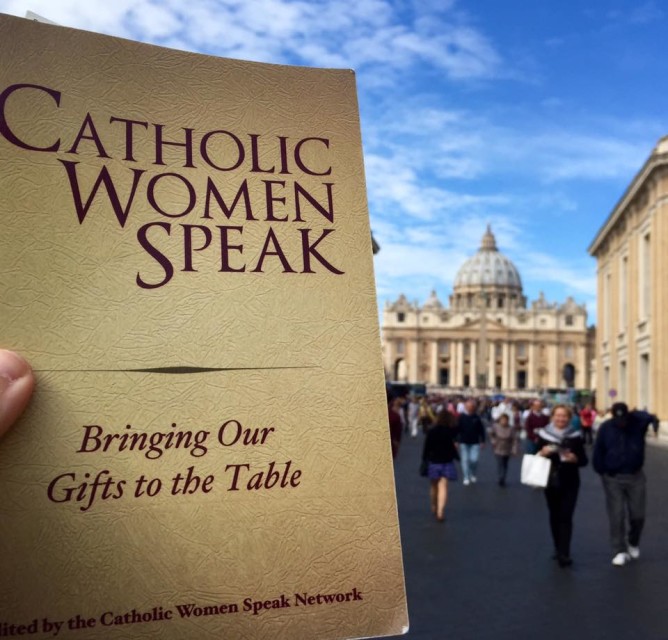 VATICAN CITY (RNS) Women don’t have a vote at the meeting of 270 Catholic bishops on family issues that began this week, but they hope their voices will be heard.

Divorce, cohabitation and gay relationships are just some of the issues up for discussion at the Vatican synod, which continues through Oct. 24. It follows a questionnaire consultation with Catholic groups after a meeting on family issues a year ago.

Some critics say that more women should have been included in the process. Only bishops can vote at a synod, but about 30 women have been invited as auditors.

Mary McAleese, former president of Ireland, said she was skeptical that any real change would come from the synod.  “If I wanted expertise on the family, I honestly cannot say that the first thing that would come into my mind would be to call together 300 celibate males, who between them, that we know of, have never raised a child,” she said on Saturday, speaking at an event hosted by gay Catholics.

The limited involvement of women in the synod was seen as a lost chance by Tina Beattie, professor of Catholic studies at the University of Roehampton in London. “This was Francis’ opportunity to show that he really is serious when he talks about giving women a more significant role (in the church) and I don’t think he’s delivered on it.”

Beattie was at a conference in Rome hosted by the Catholic Women Speak Network, founded in January as an online forum to fill the gaps in theological discussion relating to women. The group received such an enthusiastic response that it has  published a book on the topic, “Catholic Women Speak: Bringing Our Gifts to the Table,” released just ahead of the synod.

READ: No rest for a weary pope: Francis now faces a bigger test than US trip

But despite animated debate at the conference, Beattie said she expected little change across town at the Vatican: “I think the best one can hope for is that there is a change in climate in which it’s easier for us to talk.”

While women’s ordination is the ultimate goal of some in the 800-member group, Beattie said many other issues also need to be addressed, such as maternal mortality and the fact that the vast majority of Catholic women don’t follow the church’s teaching on contraception.

Nontando Hadebe, chair of the Circle of Concerned African Women Theologians, said bishops should address violence against women as a specific topic.

“It needs to be a decisive moment when the church really understands the fuller picture,” she said. “There needs to be a message that goes into the pews — that violence is inconsistent with family.”

Hadebe went on to say the Vatican should look at the reality of Catholic families, realizing grandmothers can play a central role in bringing up children, while in other situations children are raised by single mothers. “We are finding the nuclear family being the minority. We’re not saying get rid of the nuclear family, but embrace the multiplicity of the family,” she said.

At the end of the synod, the Vatican is expected to release a final document agreed upon by bishops detailing the outcome of their discussions.