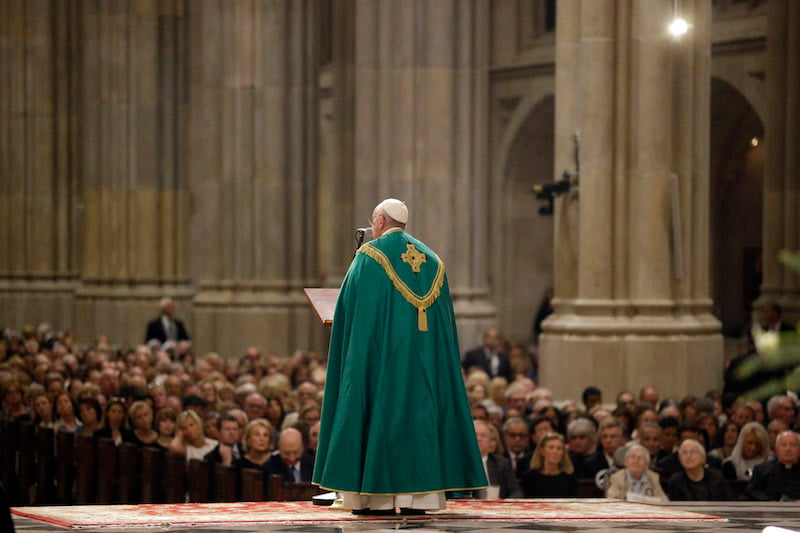 (RNS) Pope Francis returned to Rome Monday (Sept. 28) after the longest and perhaps most challenging foreign journey of his pontificate: a trip that lasted 10 days and took him from the communist outpost of Cuba to the capitalist superpower of the U.S., where the popular pontiff faced some of his toughest critics — both inside and outside the church.

On Sunday (Oct. 4) in the Vatican, Francis formally opens a three-week meeting of some 270 bishops from around the world who will discuss — or, more likely, argue vociferously about — church teachings on family life, a topic that encompasses hot-button questions about the church’s views on divorce, homosexuality and cohabitation.

“(W)hat is at stake is not only Francis’ pontificate but the very idea of a church that can handle change without the threat of schism,” Massimo Faggioli, a theologian and church historian at the University of St. Thomas in St. Paul, Minn., wrote in the latest edition of Commonweal magazine.

The meeting, known as a synod, follows a similar summit that Francis called last October and, despite the blanket media coverage of the pontiff’s recent six-day tour of Washington, New York and Philadelphia, this meeting will be far more consequential for Francis’ reform-minded papacy, and the future of Catholicism, than any pastoral visit.

“The success of the synod will not be measured by any overnight revisions of official doctrine, but rather by the ability of the church to proceed on the basis of a consensus, without obsessing over unanimity,” Faggioli said. “Because if reform requires unanimity, no reform will pass.”

And if the synod does not open the door to some adaptations or changes in pastoral practices, then the enormous popularity that Francis has enjoyed since his election in 2013 — a popularity buoyed in part because of expectations that his talk about a welcoming and inclusive church would be matched by deeds — could take a serious hit.

Whatever happens, the debate itself is a landmark change.

In the 1960s, following the reforms of the historic Second Vatican Council (1962-1965), Pope Paul VI established a synod system so that bishops from around the world could meet every few years and continue to foster a more collegial, collaborative and horizontal form of church governance.

It was designed to reduce the centralization of power in the Roman Curia, the papal bureaucracy, and allow input from bishops with pastoral experiences from different countries.

As often happens in institutions, however, the bureaucracy clamped down on those plans, and the election of Pope — now saint — John Paul II in 1978, followed by his successor, Benedict XVI in 2005, signaled a restoration of Vatican authority.

Francis himself recalled how in 2001, when he was named to a synod, he was told by Vatican officials that he could not deliver the comments he had prepared.

“That will not happen now,” Francis said before the start of last year’s synod.

And it hasn’t. Many bishops at last year’s synod raised questions about how the church could better welcome those whose lives don’t conform to the ideals of the catechism — cohabiting couples and those who are divorced and remarried without an annulment, for example, and even gay couples.

READ: Why is Pope Francis asking people to pray for him?

While those categories weren’t the only issues raised at the synod, they became flashpoints for controversy, and came to stand for the larger, more neuralgic debate over whether church teachings and practices could change.

Many bishops found the new approach exhilarating as well as necessary if the church was to shed the “fortress” mentality that Francis has decried.

But conservatives who have always been nervous about Francis’ reformist ways — and had been used to papal patronage for decades under John Paul II and Benedict XVI — went into full panic mode.

Leading cardinals have written books warning of heresy if the synod found a way to allow, for example, divorced and remarried Catholics to receive Communion, and they and other church leaders and conservative pundits have been giving interviews and lectures and writing columns predicting historic schisms and divisions in the 1.2 billion-member church if any reforms are adopted.

Geographic splits have already emerged, with bishops in German-speaking countries, in particular, leading the call for reform while churchmen in Africa, along with many Eastern European prelates, are charging the Western Europeans with a kind of neocolonialism for trying to foist changes on a faith they say they are preserving.

The delegation of eight American churchmen, on the other hand, seems divided between reformers and conservatives.

The anxiety on the right has also been evident in widely broadcast claims of skullduggery by liberals and conspiracy theories that reformers “rigged” the synod last fall and are set to do the same this time around.

Francis has “stacked the deck” in favor of liberals, some say, while others decry “shadow synods” and secret task forces that are writing the script for the summit before it is even convened — claims that read more like a Dan Brown novel.

Progressives have certainly sought to push their views, though more quietly. They do not want to be cast as wanting to change anything and everything, or to overplay their hand. They have some confidence that there is significant support for their views among the 270 voting members of the synod, but they don’t want to sound overconfident or invite a backlash among those who may be sitting on the fence.

The conservatives may have the advantage of playing defense: They simply want the synod and the pope to reaffirm church teachings and practices, or, at worst, to settle for some vague call for mercy.

The latest guidelines on how the synod debates will unfold over the next three weeks were released on Friday (Oct. 2) and they are structured to guarantee more dialogue, and probably more fireworks — and that may be the way Francis likes it.

“If disagreements or differences of opinion arise, do not worry,” Francis told a group of priests just before his U.S. visit, reprising a theme he often stresses. “Better the heat of the argument than the coldness of indifference, which is the real tomb of fraternal charity.”

This month may show if the pontiff is getting more than he bargained for, and if many Catholics will get less than they wanted.