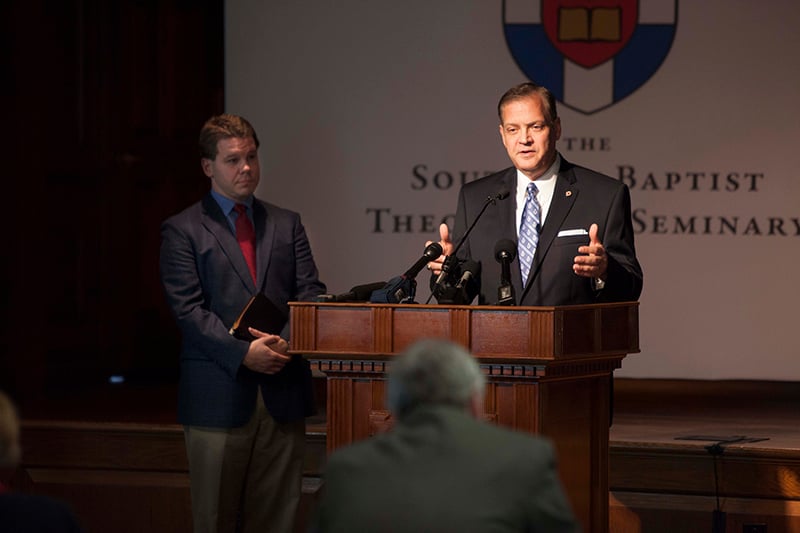 (RNS) Galileo would be proud. Sort of.

Earlier this week, Albert Mohler, president of the Southern Baptist Theological Seminary, condemned “reparative therapy” that aims to make gay and lesbian people straight. But he added that homosexual orientation can change through divine intervention.

Other prominent conservative Christians have also changed their thinking on reparative therapy in recent years, including Alan Chambers, the erstwhile leader of America’s largest ex-gay ministry.

These hopeful developments demonstrate that conservative Christians are not content to live in the Dark Ages on important matters such as sexuality, but they are also cautionary tales. That’s because these leaders once drew unequivocal lines in the sand about issues such as reparative therapy and stamped them with a “thus saith the Lord.” Their current enlightenment on these matters should warn Christians about sounding certain on matters where Scripture is not clear and where they are not experts.

Mohler’s comments mark a clear pivot in his thinking. In 2004, the theologian lamented the American Psychological Association’s condemnation of “’reparative therapy’ and ‘transformational ministry’ intended to lead persons out of the homosexual lifestyle and into heterosexuality.”

In 2005, Mohler decried some mainline Protestant denominations’ condemnation of orientation change therapy. He claimed that these Christians were driven by a “psychological worldview that is directly at odds with the worldview of the Bible.”

But Mohler’s mind on the matter began evolving as early as 2011 after former U.S. Rep. Michele Bachmann’s husband was accused of performing reparative therapy. Mohler wrote that “a biblical Christian will have no fundamental confidence in any secular therapy’s ability to change a sinner’s fundamental disposition and heart, and this includes every aspect of the sinner’s life, including sexuality.”

At the same time, Mohler stated, God “can save us from ourselves” and our “own pattern of sinful desires.” He said gays “need a fundamental reordering of their sexual attractions. About this, the Bible is clear.”

“We hold full confidence in the power of the Gospel and of the reign of Christ within the life of the believer,” Mohler wrote. “We know that something as deeply entrenched as a pattern of sexual attraction is not easily changed, but we know that with Christ all things are possible.”

The seminary president once believed that “sexual orientation” was a cultural construct rather than a reality inherent in all humans. But in 2014, he announced that his thinking on this matter had also evolved. At a conference on sexuality hosted by the Ethics and Religious Liberty Commission, Mohler admitted that he needed to “repent” that he once “felt it quite necessary, in order to make clear the gospel, to deny anything like sexual orientation.”

“Put simply, most people experiencing a same-sex attraction tell of discovering it within themselves at a very early age, certainly within early puberty,” Mohler said in 2014. “As they experience it, a sexual attraction or interest simply ‘happens,’ and they come to know it.”

“One of the things we should not be embarrassed to say is that we are learning,” he stated. “One of the embarrassments that I have to bear is that I have written on some of these issues now for nearly 30 years, and at a couple of points I have to say ‘I got that wrong,’ and we have to go back and correct it, correct it by Scripture.”

The evolution of Albert Mohler calls to mind the now infamous trial of Galileo Galilei by the Roman Catholic Inquisition in 1633. Using a newfangled invention called a “telescope,” Galileo endorsed Nicolaus Copernicus’ heliocentric theory that the Earth revolves around the sun. The Catholic Church believed the Earth was the center of the universe, a view it believed was evident in the Bible. The Inquisition deemed Galileo a heretic, placed him under house arrest and banned heliocentric books and teaching. He was later vindicated by overwhelming scientific consensus.

Evangelicals are, to borrow a cliche, often wrong but rarely in doubt. They speak about scientific, cultural and sociological matters with a high degree of certainty. They claim that their views are supported by the clear teachings of Scripture and are central to the Christian gospel. Their views are not just presented as truth but as God’s truth. Science be damned.

Mohler and others claimed “for nearly 30 years” that the Bible had settled the issue of sexual orientation and reparative therapy. But it turns out, the Christian Scriptures are silent on both matters.

We should celebrate the humility and courage it takes for Mohler and others to say “I got that wrong.” And yet, Christian leaders must ask how this situation might help them become more prudent in expressing their opinions going forward. When the Bible speaks clearly, leaders should speak clearly. But when the Bible is unclear — for example, on the reality of sexual orientation or the effectiveness of reparative therapy — leaders should embrace an appropriate level of uncertainty.

The stakes are high. For when Christians invoke the Bible to push forward their cultural and political agendas and then turn out to be wrong, it compromises their credibility on the many other matters they claim to know for certain.

News
Lonely no more: Questioning Christians find belonging on TikTok
Follow us on Facebook!
Submit your photos to RNS