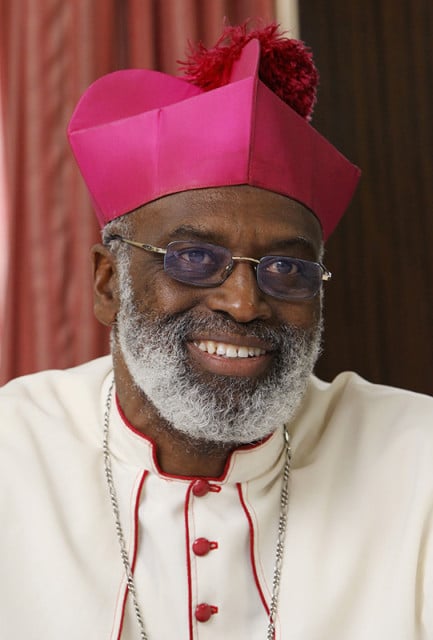 Archbishop Charles G. Palmer-Buckle of Accra, Ghana, is pictured during a meeting with representatives of the U.S. Conference of Catholic Bishops in Accra on Aug. 27, 2010. Photo by Nancy Wiechec, courtesy of Catholic News Service

VATICAN CITY (RNS) Ghanaian Archbishop Charles Palmer-Buckle on Thursday (Oct. 8) defended African bishops’ role in the Vatican’s meeting on family issues, stating they were not in Rome to block progress but to present their own views.

As bishops get to work discussing key issues affecting family life at the meeting, known as a synod, they have broken into small language-based groups. Palmer-Buckle was responding to a question at a press conference suggesting that African bishops were trying to stop “progress.”

“If someone thinks Africa is blocking something, it’s only proposing what we feel,” he told journalists at the Vatican. “We’re not here to block anybody.”

Ahead of the start of the three-week synod, which began on Sunday, there was much debate about whether the 270 bishops at the synod would agree on a more open view toward gays and divorced Catholics who have remarried in civil ceremonies.

Palmer-Buckle said he would not be supporting such proposals if brought to the table at the synod.

“The pope is making it very clear that doctrinal issues remain what they are, and we definitely endorse what the church teaches about marriage, the family and Holy Communion for Catholics.”

Under current church guidelines, divorced Catholics who have remarried without first getting an annulment are barred from receiving Communion.

The archbishop said African bishops are interested in discussing issues surrounding the extended family model that they are confronted with in Africa; it differs from the nuclear families that are more common on other continents.

Since Africa is the continent with the fastest-growing Catholic population, Palmer-Buckle said African bishops had a lot to discuss at the synod. “We are here from Africa in our good numbers and we are contributing very, very validly to what is being discussed.”

But he did not believe discussions underway at the synod were favoring a particular part of the world. “We don’t think that the issues being dealt with are European; they are issues of the entire Catholic Church, and we are here to contribute from that perspective,” he said.

Palmer-Buckle’s comment followed a warning earlier this week by Pope Francis, who told synod bishops not to give in to “conspiracy” theories. The arrival of bishops from around the world has been met with an air of mistrust and the suggestion of regional alliances being formed, which the pontiff has tried to dispel.