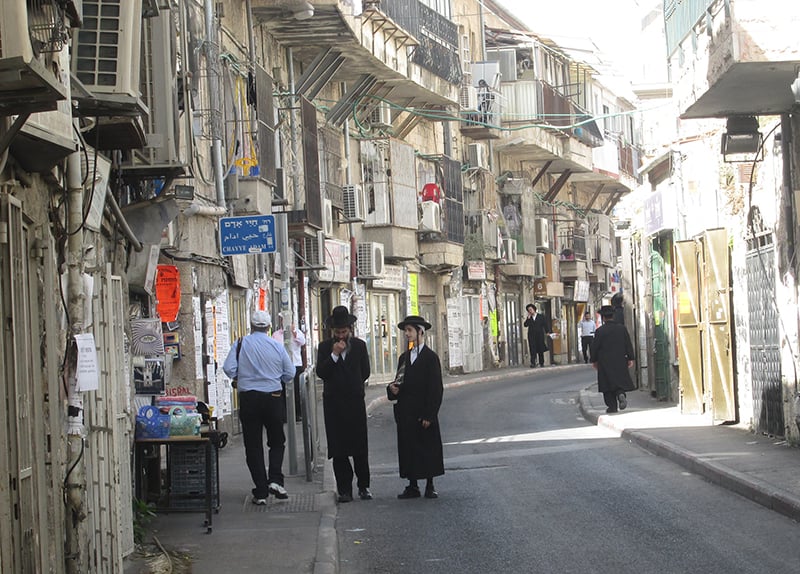 The streets of Meah Shearim in Jerusalem were nearly deserted on Tuesday (Oct. 13), the day a Palestinian terrorist rammed his car into a crowd of religious Jews a block away. Religion News Service photo by Michele Chabin

JERUSALEM (RNS) Sigalit Greenbaum, who works in a bakery in the ultra-Orthodox Meah Shearim neighborhood in Jerusalem, has a great deal of faith in God.

But on Tuesday morning (Oct. 13), when a Palestinian rammed a car into a group of religious Jews waiting for a bus up the street, she positioned a tall metal pastry strand in front of an opening in her bakery’s counter, to prevent any potential attackers from entering.

“I feel shaken,” Greenbaum said of the surge in Palestinian attacks since the 2014 war with Hamas, and especially during the past month. “On the news they’re saying the terrorists are targeting soldiers and religious Jews, and we’re religious.”

While no one tracks the number of religious versus secular Jews who have been injured or killed in attacks, religious Jews “are grossly overrepresented in the number of victims of stabbings and vehicular terrorist attacks,” said Amichai Magen, a researcher at the Israel-based International Institute for Counter-Terrorism.

On Oct. 3, a knife-wielding Palestinian stabbed to death two religious Jewish men and injured a woman and toddler in the Old City of Jerusalem. Two days earlier, gunmen killed a West Bank religious couple in front of their four children.

Magen attributed the increase in attacks against religious Jews to incitement from Islamic militant groups such as Hamas and Islamic Jihad.

“These groups define the conflict as Muslims versus Jews and use anti-Semitic imagery. In the minds of the attackers, Orthodox Jews represent the Jewish people.”

They are also easy targets because of their distinctive dress and, said Magen, because they do not serve in the Israeli military, the place where less-religious Israelis typically learn self-defense.

Many of the latest attacks, as well as clashes between Palestinian rioters and Israeli soldiers, can be traced back to Muslim fears that Israel plans to assert partial or full sovereignty over the Temple Mount, a holy site for both Jews and Muslims.

Under a status quo agreement, non-Muslims may visit the site, home to the Al-Aqsa Mosque and the former site of the destroyed Jewish Temple, but they may not pray there. Muslims are now demanding that Jews stop visiting altogether.

“The essence of the current conflict is over Al-Aqsa,” said Shaul Shay, research director at IDC Herzliya, an educational consortium. “Muslims define the conflict as a way to protect Islam and the mosque against Jews. Orthodox Jews are the symbol of Judaism.”

Religious Jews aren’t the only ones who feel targeted, according to Thabet Abu Rass, the Israeli-Arab director of the Abraham Fund, an Israeli nonprofit organization that promotes coexistence and equality among Israel’s Jewish and Palestinian citizens.

On Tuesday, a Jewish man stabbed another Jewish man, mistaking him for a Palestinian.

Riding on a Jerusalem bus as ambulances headed to the terrorist attack in Geula roared by, Sy Gottlieb, a modern Orthodox Jew, said he has no intention of disguising his Jewishness.

“Maybe I’d do that in New York, London or Moscow,” he said, referring to cities where Orthodox Jews recently were targeted in anti-Semitic attacks. “Not in Jerusalem.”

Gottlieb said his father was killed in 2002, in one of the bus bombings during the second Palestinian uprising. He added: “That didn’t make me leave Israel.”

Standing behind her bakery’s counter, Greenbaum said she would try to stop anyone who wants to inflict violence.

Nodding to a female co-worker, she added, “We won’t let terrorists kill us.”