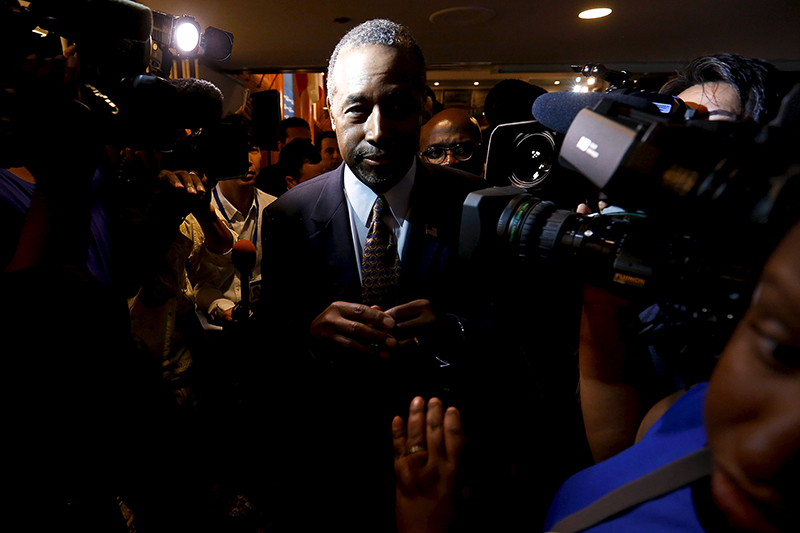 U.S. Republican candidate Dr. Ben Carson talks to reporters after speaking at the National Press Club in Washington, on October 9, 2015. Photo courtesy of REUTERS/Jonathan Ernst *Editors: This photo may only be republished with RNS-GROSSMAN-COMMENTARY, originally transmitted on Oct. 12, 2015.
October 12, 2015
Cathy Lynn Grossman This sculpture, representing a Jewish Holocaust victim in a prayer shawl with concentration camp numbers on his arm, has been displayed at the Yad Vashem in Jerusalem. Photo by Cathy Lynn Grossman

(RNS) Many people were startled by GOP 2016 presidential candidate Ben Carson's recent remarks about Germany, gun control and the Holocaust. He offered up a decades-old NRA-touted version of history in which Hitler supposedly cracked down on private guns and thereby Jews were unable to defend themselves.

I’ll let the historians take that one apart, starting with a study by Columbia University Law professor Bernard Harcourt, who called a much-cited Hitler quote lauding gun registration as "probably a fraud" and "likely never uttered."

But I'd like to invite Carson to do his own research. Israel's Holocaust museum, Yad Vashem, is too far away. The next time he's in Washington, I suggest we tour the U.S. Holocaust Memorial Museum. Perhaps he could help me understand his idea that Jews might have saved themselves if they had only had guns handy.

Carson could show me which of the millions (that’s 6 million, counting just Jews but many more if the count includes gays, Christians and political dissidents) he pictured rising up.

We could stop by the exhibit of the shoes.

Some of them are tiny. One million children were killed in the Holocaust.  Many of the shoes belonged to women -- folks who rarely had firearms in the 1940s. Were they complicit like the Oregon victims Carson shrugged off for failing to fight back?

We could check the exhibits on the euthanasia program.

Initially, the Nazis had a special unit that killed the sick, disabled, and the mentally ill. They murdered more than 70,000 by 1941 and then they stopped counting. Guns for the blind? No, probably Carson didn’t mean them -- or the elderly and disabled that Oregon shooter Chris Harper Mercer gunned down.

Then we could look into the history of the mobile killing teams, the Einsatzgruppen, which swept through the tiny towns where Russia had kept most Jews and herded them to trenches for execution by firing squads. Surely Carson has heard of Babi Yar, the ravine near Kiev where nearly 34,000 Jews were killed?

According to the Holocaust museum, “By the spring of 1943, the Einsatzgruppen and Order Police battalions had killed over a million Soviet Jews and tens of thousands of Soviet political commissars, partisans, Roma, and institutionalized disabled persons.“

As far as I know, Russia didn’t have gun control. So the Hitler-gun-suppression theory wouldn’t have applied. Neither would it have applied in Poland, where the Nazi regime planted many of its most notorious death camps.

If Carson had any trouble picturing folks who were herded on trains to the gas chambers, I’ve included a visual aid -- a photo of a sculpture of an anguished old man in a prayer shawl, bearing a tattoo from a concentration camp on his left arm. Should he have had a pistol handy under his prayer shawl to challenge the Nazis?

In 1971, this statue stood near the entrance of Yad Vashem. In succeeding decades, it’s been moved as more exhibits -– including a valley of stone monuments to Jewish towns wiped out by the Nazis and their collaborators –- have been added to the site on a Jerusalem hillside. A group of Jews are taken prisoner during the Warsaw Ghetto uprising of April 1943. For use with RNS-GUNS-HOLOCAUST, transmitted on February 6, 2013. Religion News Service file photo

Is Carson really saying these futile few who fought to their own deaths are more noble than those who perished?

On Friday (Oct. 9), the U.S. Holocaust Museum issued a statement condemning the “misuse of Holocaust in public discourse":

“Nazism represented a singular evil that resulted in the murder of six million Jews and the persecution and deaths of millions of others for racial and political reasons. Comparing contemporary situations to Nazism is not only offensive to its victims, but it is also inaccurate and misrepresents both Holocaust history and the present. The Holocaust should be remembered, studied, and understood so that we can learn its lessons; it should not be exploited for opportunistic purposes.”

Jonathan A. Greenblatt, national director of the Anti-Defamation League, said in a statement: "The small number of personal firearms available to Germany’s Jews in 1938 could in no way have stopped the totalitarian power of the Nazi German state. ... In short, gun control did not cause the Holocaust; Nazism and anti-Semitism did.”

Friday, Carson called the ADL statement "foolishness" and stood by his own peculiar, discredited version of history.

After a tour of the Holocaust Memorial Museum and after listening to Jewish historians and maybe gazing at those shoes, Carson might have a change of heart.

(Cathy Lynn Grossman is senior national correspondent for Religion News Service. This post is adapted from her blog, Faith & Reason.)

Related Posts
By Jeffrey Salkin
Yes, confederate names matter
By Elana Schor
Gun control group starts faith-driven push ahead of election
By Yonat Shimron
An Old World Torah scroll unites a North Carolina synagogue in a time of pandemic
By Tom Heneghan
Wartime Vatican archive shows how much Pius knew about the Holocaust, says researcher
By Yonat Shimron
A gift of photos from a papal coronation opens a path for Jewish-Catholic healing