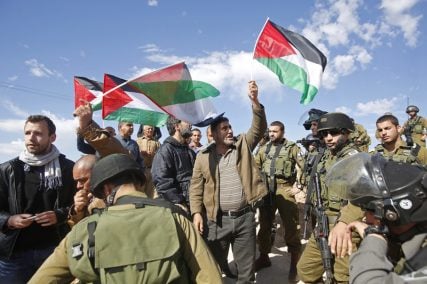 Protesters hold Palestinian flags as they stand next to Israeli soldiers and border policemen during a protest against Jewish settlements in Jabaa, south of the West Bank city of Bethlehem, on Feb. 7, 2015. Photo courtesy of REUTERS/Mussa Qawasma
*Editors: This photo may only be republished with RNS-MOSQUE-ARSON, originally transmitted on Feb. 25, 2015.

JERUSALEM (Reuters)  Palestinians in the Israeli-occupied West Bank set fire to a Jewish shrine near Nablus and stabbed an Israeli soldier near Hebron on Friday (Oct. 16)  as tensions ran high after more than two weeks of violence.

Israel‘s military said about 100 people converged on the tomb of the biblical patriarch Joseph in the northern part of the West Bank and set parts of it ablaze before Palestinian security forces arrived and pushed them back.

Hours later, a Palestinian posing as a journalist wounded an Israeli soldier with a knife before being shot dead, the Israeli military added. That attack took place near Hebron, in the southern part of the occupied territory.

Reuters television footage showed the Palestinian surrounded by Israeli troops after the attack, rolling on the ground in a florescent yellow vest over a t-shirt marked “PRESS”. He was holding a knife in his hand.

The soldiers then threw stun grenades to disperse gathered journalists.

A military statement about the shrine attack said: “We view this incident with gravity and strongly condemn any attack on holy sites. We will find and arrest those who set the fire.”

Palestinian President Mahmoud Abbas, in a call to end the violence, condemned the attack. He ordered the damage to be repaired and opened an investigation into the arson.

A statement from his office said Abbas “stressed his rejection of these actions and all actions that violate law and order, and which distort our culture, our morals and our religion.”

The unrest that has engulfed Jerusalem and the occupied West Bank, the most serious in years, has claimed the lives of 34 Palestinians and seven Israelis.

The Palestinian dead include 11 knife-wielding assailants, police said, as well as children and protesters shot during violent demonstrations. One man died in Gaza on Friday from wounds sustained in a clash a week ago.

The Israelis were killed in random attacks in the street or on buses.

The U.N. Security Council will hold a special meeting to discuss the situation. No resolution is planned for Friday, but there might be an attempt to get the council to issue a statement aimed at urging the two sides to curb the violence.

Hamas, which controls the Gaza Strip, called for “rallies of anger and confrontations” on Friday in all West Bank cities.

The unrest has been triggered in part by Palestinians’ anger over what they see as increased Jewish encroachment on Jerusalem’s al-Aqsa mosque compound, which is also revered by Jews as the location of two destroyed biblical Jewish temples.

Israel says it is keeping the status quo at the holy compound.

U.S. Secretary of State John Kerry has said he plans to travel to the Middle East soon to try to calm the violence.

“A suggestion was raised that John Kerry and I and King Abdullah (of Jordan) and others would meet,” Israeli Prime Minister Benjamin Netanyahu said on Thursday.

“I have no problem with that, we did that a year ago, it was actually fruitful. It could happen again,” he said, adding that he was willing to meet Palestinian President Mahmoud Abbas.

News
What four strangers of different faiths learned while living together during a pandemic
Martini Judaism
If you’re religious and supported President Trump
News
How the shofar emerged as a weapon of spiritual warfare for some evangelicals
Opinion
How Jewish is “Ma Rainey”?
News
Israel’s recognition of Utah marriages gives hope to ineligible couples