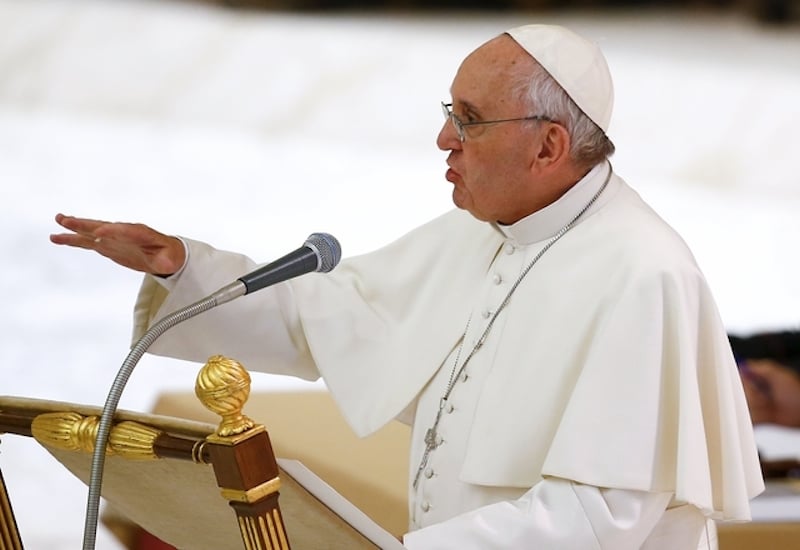 Pope Francis talks during a special audience to mark the 50th anniversary of Synod of Bishops in Paul VI hall at the Vatican October 17, 2015. REUTERS/Tony Gentile

VATICAN CITY (Reuters) – Pope Francis called on Saturday for “healthy decentralisation” of power in the Roman Catholic Church, including changes in the papacy and greater decision-making authority for local bishops.

Francis made his comments at a ceremony marking the 50th anniversary of the founding of the Synod of Bishops, a worldwide gathering that occasionally advises the pope on a host of issues.

Over the years, many bishops have complained that the synod, which meets at the Vatican every few years, has become a weak and ineffective rubber-stamping body.

The Argentine pope said the type of collegiality – the papal governing of the Church in collaboration with bishops – envisaged by the reforming 1962-1965 Second Vatican Council still had not been achieved.

National and regional bishops’ conferences should have more authority to make decisions affecting the faithful in their areas rather than always looking to Rome for a centralised decision that has to fit all, he said.

“In this sense, I feel the need to move ahead with a healthy decentralisation,” he said.

Francis also said it was “necessary and urgent to think about a conversion of the papacy”, a possibility that was first floated by the late Pope John Paul II in 1995.

Without elaborating, Francis said “more light could be shed” on the exercising of the papacy, both within the 1.2 billion member Church and in its relations with other Christian churches that split from Rome over the primacy of the papacy.

The current synod of bishops has been discussing how the Church can better serve families and minister to Catholics in difficulty, such as homosexuals and divorced people who have remarried outside the Church.

Progressives say bishops should have authority to apply doctrine on some issues – such as whether divorced and civilly remarried Catholics can receive communion – according to individual circumstances.

Conservatives oppose any changes to rules and say they should be applied identically around the world.

The synod enters its third and final week on Monday and will produce a final paper that the pope may use to write his own authoritative document on the issues.