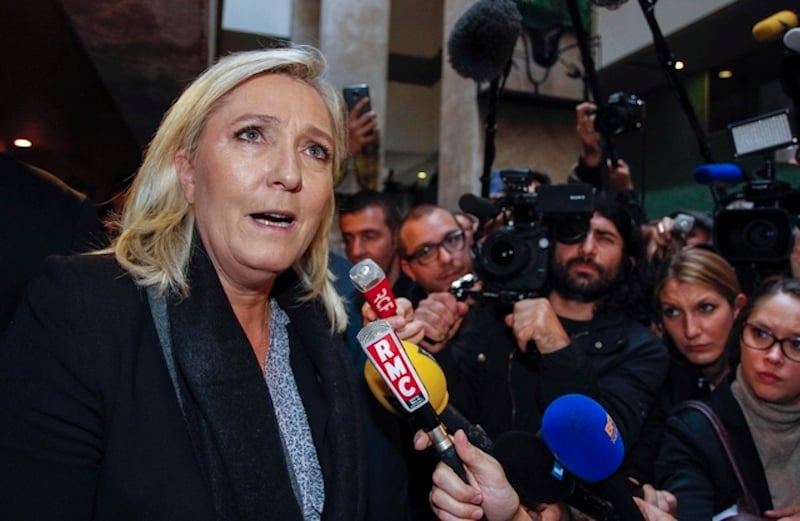 Le Pen, who polls say is likely to win a regional election in December, has tried to broaden the party’s appeal since she took over in 2011 from her father and party founder Jean-Marie.

He was convicted several times of inciting racial hatred and his daughter has made efforts to distance herself from him.

But in a meeting in 2010, Le Pen – whose party thrives on concerns over immigration and radical Islam – criticized Muslims praying in the streets when mosques are full.

“We are just a month ahead of the regional elections and this case is five years old. Couldn’t it wait another month?” she said to reporters as she arrived at the tribunal.

At a rally in 2010, she had said: “I’m sorry, but for those who really like to talk about World War Two, if we’re talking about occupation, we could talk about that (street prayers), because that is clearly an occupation of the territory.”

She was charged with “incitement to discrimination over people’s religious beliefs” and on Tuesday, she said street prayers were illegal and “sought to impose religious law” in France but did not repeat the comparison with Nazi Occupation.

The case has had many twists and turns and had initially been put aside by judges in December but anti-racism groups filed a new complaint.

It was unclear when a ruling would be made.

News
French police operations underway after beheading of teacher
Signs of the Times
How to make our politics better: Pray first, says a Jesuit guide
Opinion
Rattled by Trump’s COVID? Try the Bible’s anti-anxiety treatment
Opinion
Black clergy call for 40 days of prayer, fasting and ‘spiritual warfare’ before election
Opinion
Nike, don’t make me choose between Liverpool FC and the Uighurs
© Copyright 2020, Religion News Service. All rights reserved. Use of and/or registration on any portion of this site constitutes acceptance of our User Agreement and Privacy Policy, Privacy Statement and Cookie Notice. The material on this site may not be reproduced, distributed, transmitted, cached or otherwise used, except with the prior written permission of Religion News Service.