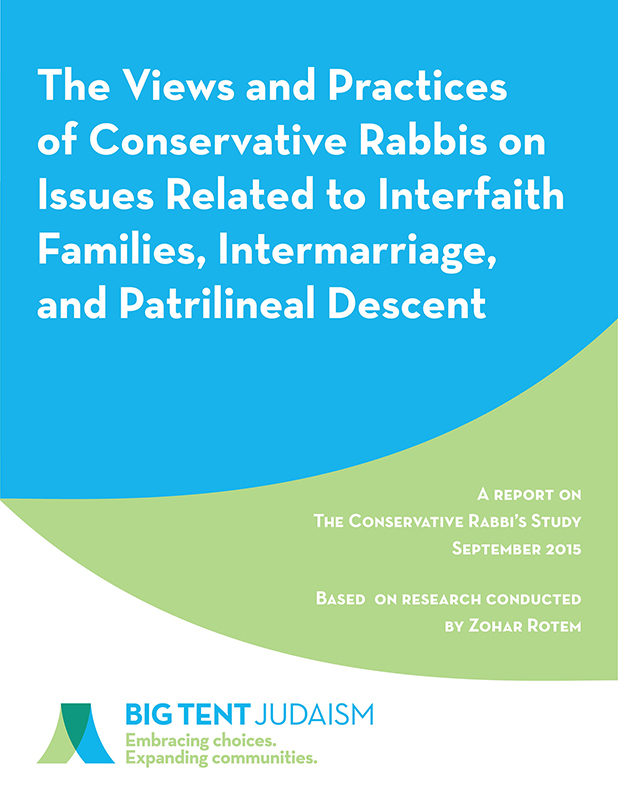 A new study by Big Tent Judaism, “The Views and Practices of Conservative Rabbis on Issues Related to Interfaith Families, Intermarriage, and Patrilineal Descent.” Photo courtesy of BigTentJudaism.org

(RNS) A controversial new survey of Conservative rabbis shows that nearly 4 in 10 (38 percent) would officiate at the marriage of a Jew and non-Jew if the Conservative movement lifted its prohibition on these unions.

The survey of 249 Conservative rabbis also found that about the same proportion (39 percent) would like their governing body, the Rabbinical Assembly, to discuss whether the prohibition on presiding at intermarriages should be reconsidered. The research was conducted by Big Tent Judaism, a New York-based nonprofit that aims to make Jewish communities more welcoming to intermarried Jewish couples.

Schonfeld also said the Conservative movement devoted an entire convention, in 2012, to the sorts of questions posed by the survey, and that it is confronting the issue of intermarriage head on. But “unscientific” and “unrepresentative” studies, she continued, do not bring the community any closer to answers.

Paul Golin, Big Tent’s associate executive director, said that the study is valuable even though its respondents were self-selecting. “The point of us doing this was to let rabbis know that they may not be alone in their thinking if they were thinking along these lines,” he said.

Reform Judaism also allows its rabbis to preside at interfaith ceremonies, though many Reform rabbis require that the interfaith couple intend to raise their children as Jews.

On the other end of the Jewish spectrum lies Orthodox Judaism, which claims about 10 percent of American Jews and cleaves most closely to Jewish law. It forbids intermarriage and upholds matrilineal descent.

The Big Tent report also showed that 4 percent of Conservative rabbis surveyed had defied the prohibition on officiating at intermarriages. The issue is fraught within Judaism, as more than half of all American Jews marry outside their religion and the community worries that its small numbers — about 2 percent of the U.S. population — may further dwindle.

Last year, when a Conservative rabbi asked his Massachusetts congregation to weigh in on whether he should be allowed to marry a Jew to a non-Jew, the question reverberated in Jewish communities across the nation.

“This is about our children and our grandchildren, and making sure that in this glorious open society, that when our children fall in love — with whomever they fall in love — they know they can always come back to their spiritual home,” Rabbi Wesley Gardenswartz said at the time.

But officially, Conservative Judaism has not budged on the issue, even as it has embraced female rabbis and same-sex weddings and welcomed the non-Jewish spouses of congregants into its synagogues.

“As rabbis, our role is to teach, inspire and promulgate that tradition.”