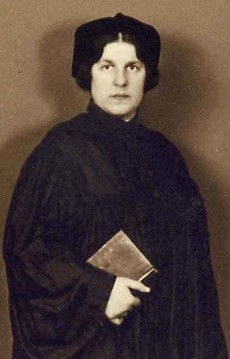 Who was the first woman rabbi?

Sally Priesand, right — ordained as a Reform rabbi in 1972?

The first woman rabbi was a German Jewish woman named Regina Jonas. For too many years, her story has been lost.

No longer.  Next month there will be a conference in Potsdam, Germany, sponsored by the Abraham Geiger College (Germany’s first rabbinical seminary since the end of World War II), commemorating her legacy and the role of women in religious leadership.

And why remember her now?

Because December marks the eightieth anniversary of her ordination.

And because her memory had been hidden for so long.

Regina Jonas was born on August 3, 1902 in Berlin. At the age of 21, she began teaching in an Orthodox Jewish school in Berlin.

In Berlin, she enrolled in the Hochschule fur die Wissenschaft des Judentums, the seminary for liberal rabbis and educators. There, she attained the qualification of “Academic Teacher of Religion.”

But Regina Jonas wanted to be ordained as a rabbi. To that end, she wrote a thesis: “Can a Woman Be a Rabbi According to Halachic Sources?” Her conclusion, based on biblical, Talmudic, and rabbinic sources was an unqualified “yes.”

Most of her professors supported her. But, the esteemed Talmud professor, Chanoch Albeck, flatly stated: “I do not ordain a girl.”

Regina then turned to Rabbi Leo Baeck, the spiritual leader of German Jewry.

Baeck greatly respected her, but he refused to ordain her. He sensed what lay ahead for the Jewish community of Germany, and he did not want to compromise communal unity.

Ultimately, Regina Jonas turned to Rabbi Dr. Max Dienemann, a distinguished liberal rabbi in Offenbach. On December 27, 1935, he ordained her as a “rabbi in Israel.” Over six years later, on February 6, 1942, Leo Baeck himself signed a certificate confirming her semicha as well.

Rabbi Jonas found work as a chaplain in various Jewish homes for the aged and the orphaned.

And then, Kristallnacht — November, 1938. The Nazis sent many liberal rabbis to concentration camps. Others were able to flee. Regina Jonas was left behind, and because there was a shortage of rabbis, she was finally able to function as a rabbi.

How ironic: The Nazi onslaught destroyed countless rabbinates. And it created a rabbinate, as well.

Jonas was ordered into forced labor in a factory. And yet, she continued her pastoral work. She continued to teach and preach. One survivor remembers: “Whenever she preached to those who were to perform forced labor, they filled the place to capacity. Those who did not manage to get in stood in the doorways as far as the street.”

She was deported to the so-called model concentration camp at Theresienstadt. Even there her rabbinate did not end. In fact, her partner in pastoral psychology was the well-known psychologist, Viktor Frankl. Her job was to meet the transports at the railway station. There she would help people deal with their sense of shock and disorientation.

Viktor Frankl wrote a great deal about his experiences during the war. His work with human beings in the camps served as the very centerpiece of his philosophy, and the subject of his masterpiece, Man’s Search for Meaning.

And yet, Viktor Frankl never mentioned Regina Jonas in his writings. Neither did Leo Baeck.

It took Frankl fifty years to remember her.

In 1991, the German-American theologian, Katharina von Kellenbach, asked Frankl directly about Regina Jonas. He admitted that he remembered her: as an energetic woman, with an impressive and powerful personality.

He was even able to recite one of her sermons from memory.

This is a section from one of Regina Jonas’s sermons in Theresienstadt:

Our Jewish people is sent from God into history as ‘blessed.’ This means that wherever one steps in every life situation, bestow blessing, goodness and faithfulness — humility before God’s self-lessness, whose devotion-full love for his creatures maintains the world. To establish these pillars of the world was and is Israel’s task. Men and women, women and men have undertaken this duty with the same Jewish faithfulness. We are God’s servants and as such we are moving from earthly to eternal spheres. May all our work which we have tried to perform as God’s servants be a blessing for Israel’s future and humanity.

For two years, Regina Jonas worked tirelessly in Theresienstadt. Finally, she was deported to Auschwitz. Her exact date of death is not clear; sometime in October, November or December, 1944.

And now, the even deeper tragedy.

Go back to the Hochschule in Berlin.

Their names have disappeared. True, they were studying to become teachers. But, like Jonas, might they have become rabbis?

We weep for the lives that were lost.

We weep for the teaching and wisdom that was lost, as well.

How do we best honor Regina Jonas’s memory?

By making sure that no woman’s spiritual gifts will ever be forgotten again.