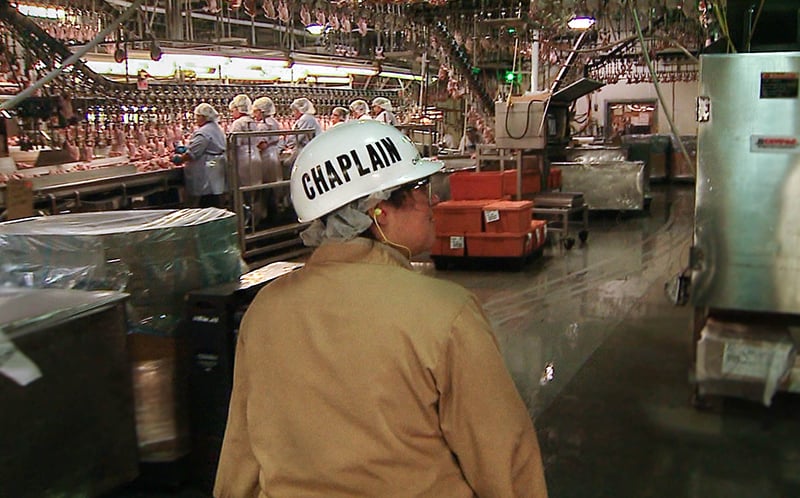 (RNS) They can be found on the battlefield, at a chicken-processing plant and behind the locked gates of a prison.

They are chaplains, and as a two-hour, two-part documentary airing on some PBS stations beginning Tuesday (Nov. 3) points out, they minister to people of all religions and none in places where they work and live.

“Their ministry really does bring them into some of the most extraordinary places where people are in crisis and need,” said Journey Films producer/director Martin Doblmeier in an interview about “Chaplains.”

Chaplains and experts featured in the film demonstrate that, while often thought of as people dealing with death and dying, these ministers also foster everyday religious practice in places where people might otherwise not experience it: The congressional chaplain dabs ashes on Congress members’ foreheads during Ash Wednesday services. A rabbi straps a Torah scroll onto his front passenger seat before driving off to minister to retired employees. The military chaplain hears confession before the soldier picks up his gun and returns to war.

MORE: Skyping with spirit: Chaplains use computers to support the seriously ill

“If I had to live in a 5-by-8 bathroom with another person I would lose my mind,” she says in the film, referring to a prison cell. “What a chaplain does is lean into the painful places.”

Doblmeier, 64, who also has produced “Bonhoeffer” and “The Power of Forgiveness,” said he chose to include the Oregon chaplain because her work demonstrates tangible results. At the time of the filming, Oregon had the lowest rate of recidivism in the country.

“She was a great example of working outside of her own faith tradition, her willingness to do that, and actually have documentable evidence that she’s part of a team that’s really making a difference,” he said.

But the influence of many chaplains is often less tangible.

Melissa Brannan, an Assemblies of God-endorsed chaplain based at Tysons Foods’ Arkansas headquarters, is shown meeting with a worker who is facing stage 4 cancer.

“I can’t cure this lady’s cancer,” she says in the documentary. “I can encourage her. I can call her. I can pray for her. I can love on her. But I can’t fix it.”

MORE: Chaplains help others grieve, but learn to grieve themselves 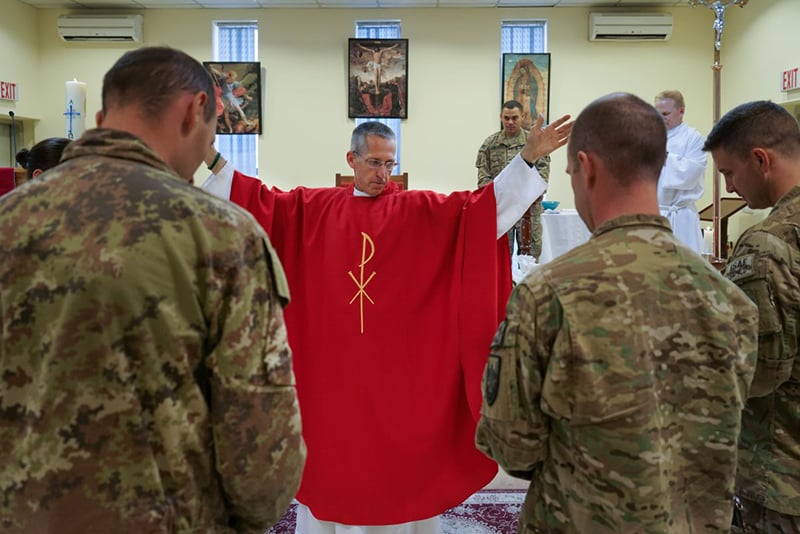 U.S. Army Chaplain Paul Hurley, a Catholic priest, says Mass for the troops at a military base in Kabul, Afghanistan. Photo courtesy of Journey Films

The preparation for chaplains in the health care field is particularly arduous, involving in some cases not only endorsement by a denomination and a theological degree but 1,600 hours of clinical pastoral education and 2,000 hours of chaplaincy practice.

Despite the long history of chaplains in some professions such as the military and Congress, Doblmeier said chaplains in other fields often face questions of job security.

“The financial part of it is still very much unresolved because many of them operate on the good graces of the institution,” he said.

Supervisors of chaplains also have the challenge of making sure that these ministers take time to care for themselves in lines of work where there often aren’t 9-to-5 days.

“If we’re not being cared for then we can’t care for them,” warns the Rev. Paul Hurley, a Catholic priest and U.S. Army colonel, in a meeting with chaplains in Afghanistan about their ability to minister to military members.

Doblmeier, a Catholic, hopes the series will not only teach viewers about the role of chaplains but also give them insights into faiths that are different from their own — something that chaplains may experience on a daily basis.

“To really celebrate — not just tolerate but celebrate — what others believe and celebrate the best of what they believe,” he said, “I think enriches us all.” News
Muslim chaplains forge a new way of thinking about Islam in secular places
Follow us on Facebook!
Submit your photos to RNS