Mormons are significantly more likely to support homosexuality than they were just seven years ago, a new Pew study reports today.

In 2007, just 24% of LDS church members said that “homosexuality should be accepted by society.”

In a 2014 follow-up survey, 36% agreed with that statement, representing a jump of twelve points.

This spike was in line with many other religious groups, which showed measurable increases of ten points (evangelicals and mainline Protestants) to fourteen points (Orthodox Christians).

However, since the Mormons started out so low initially at just 24% support in 2007, a twelve-point jump for them actually represents the sharpest spike in acceptance of homosexuality of any religious group, at 50%.

Here is how the growth in support ranked among different religions since the 2007 study:

So even though Mormons are still comparatively low in their support for homosexuality – tied with evangelicals for second-lowest – they are changing more quickly than any other religious group.

The finding is particularly interesting in light of some other, apparently contradictory, revelations about Mormons from the new Pew study.

For example, Mormons are more likely than any other religious group to say they want their religion to “preserve traditional beliefs and practices” rather than adjust them to modern life. Seventy percent of Mormons felt this way, up slightly from the 2007 survey, while only 23% wanted their religion to change with the times. 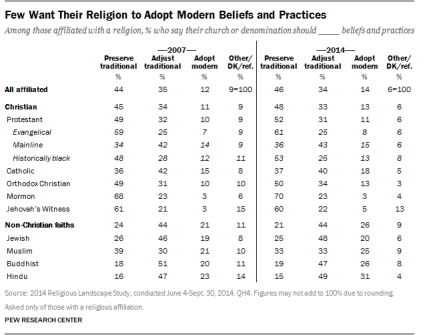 The combined scores of Mormons’ preference for tradition and aversion to “adjusted beliefs and practices” made them the most change-resistant of any people surveyed. 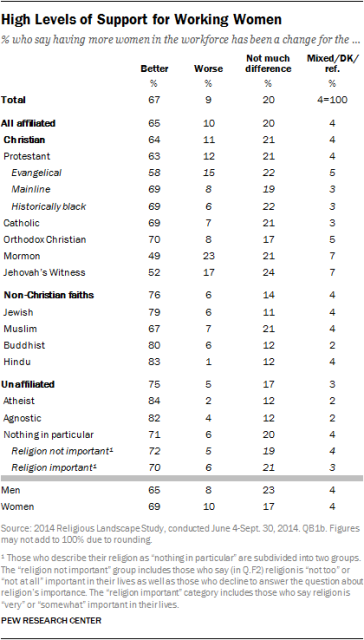 So despite the remarkably rapid growth in approval for homosexuality, Mormons are holding a very conservative line in regard to other changes.

Click here for the Salt Lake Tribune’s excellent in-depth coverage of how Mormonism fared in the Pew study, including political affiliation, church attendance rates, and views on various doctrines.

MORE RESEARCH ON MORMONS IN AMERICA: