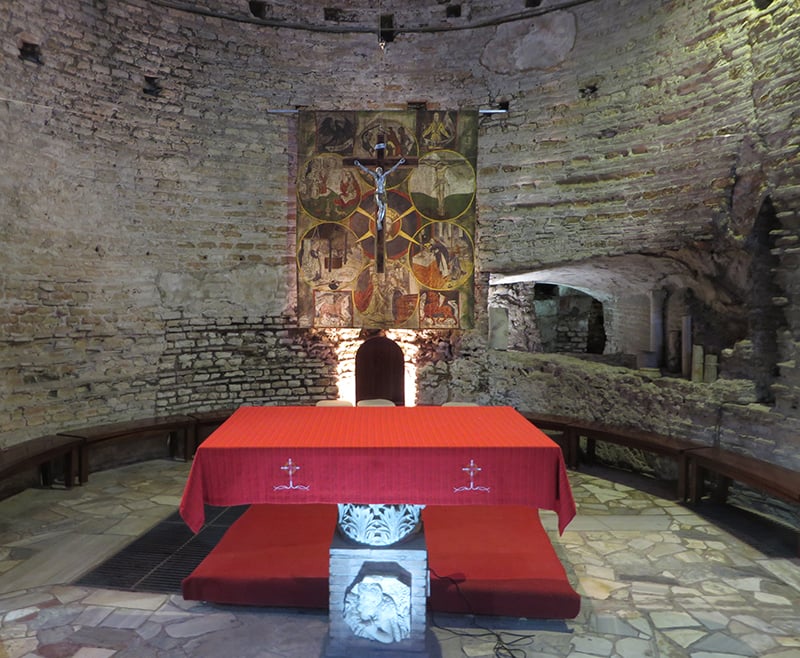 Basilica of Sts. Nereus and Achilleus, an underground altar where the Catacombs Pact was signed at a Mass on Nov. 16, 1965. Religion News Service photo by Grant Gallicho

ROME (RNS) On the evening of Nov. 16, 1965, quietly alerted to the event by word-of-mouth, some 40 Roman Catholic bishops made their way to celebrate Mass in an ancient, underground basilica in the Catacombs of Domitilla on the outskirts of the Eternal City.

Both the place, and the timing, of the liturgy had a profound resonance: The church marked the spot where tradition said two Roman soldiers were executed for converting to Christianity. And beneath the feet of the bishops, and extending through more than 10 miles of tunnels, were the tombs of more than 100,000 Christians from the earliest centuries of the church.

In addition, the Mass was celebrated shortly before the end of the Second Vatican Council, the historic gathering of all the world’s bishops that over three years set the church on the path of reform and an unprecedented engagement with the modern world — launching dialogue with other Christians and other religions, endorsing religious freedom and moving the Mass from Latin to the vernacular, among other things.

But another concern among many of the 2,200 churchmen at Vatican II was to truly make Catholicism a “church of the poor,” as Pope John XXIII put it shortly before convening the council. The bishops who gathered for Mass at the catacombs that November evening were devoted to seeing that commitment become a reality. 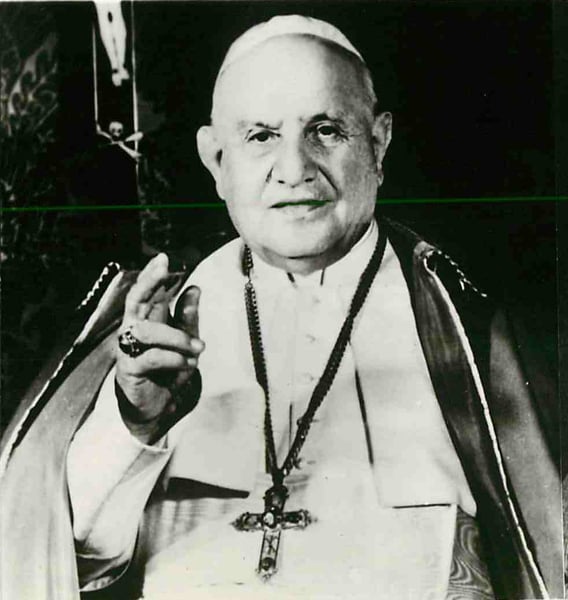 With his 25,000-word encyclical “Mater et Magistra,” Pope John XXIII joined two other pontiffs whose encyclicals on social problems constitute the greatest documents of their kind in the modern history of the church. Religion News Service file photo

So as the liturgy concluded in the dim light of the vaulted fourth-century chamber, each of the prelates came up to the altar and affixed his name to a brief but passionate manifesto that pledged them all to “try to live according to the ordinary manner of our people in all that concerns housing, food, means of transport, and related matters.”

The signatories vowed to renounce personal possessions, fancy vestments and “names and titles that express prominence and power,” and they said they would make advocating for the poor and powerless the focus of their ministry.

The document would become known as the Pact of the Catacombs, and the signers hoped it would mark a turning point in church history.

Instead, the Pact of the Catacombs disappeared, for all intents and purposes.

It is barely mentioned the extensive histories of Vatican II, and while copies of the text are in circulation, no one knows what happened to the original document. In addition, the exact number and names of the original signers is in dispute, though it is believed that only one still survives: Luigi Bettazzi, nearly 92 years old now, bishop emeritus of the Italian diocese of Ivrea.

With its Dan Brown setting and murky evidence, the pact seemed fated to become another Vatican mystery — an urban legend to those who had heard rumors about it, or at best a curious footnote to church history rather than a new chapter.

Yet in the last few years, as the 50th anniversary of both the Catacombs Pact and Vatican II approached, this remarkable episode has finally begun to emerge from the shadows.

That’s thanks in part to a circle of theologians and historians, especially in Germany, who began talking and writing more publicly about the pact — an effort that will take a major step forward later this month when the Pontifical Urban University, overlooking the Vatican, hosts a daylong seminar on the document’s legacy. Pope Francis washes the foot of a prisoner at Casal del Marmo youth prison in Rome on March 28, 2013. Two young women were among 12 people whose feet Pope Francis washed and kissed at a traditional ceremony in a Rome youth prison on Holy Thursday, the first time a pontiff has included females in the rite. Photo courtesy of REUTERS/Osservatore Romano

But perhaps nothing has revived and legitimated the Pact of the Catacombs as much as the surprise election, in March 2013, of Argentine Cardinal Jorge Mario Bergoglio — Pope Francis.

While never citing the Catacombs Pact specifically, Francis has evoked its language and principles, telling journalists within days of his election that he wished for a “poor church, for the poor,” and from the start shunning the finery and perks of his office, preferring to live in the Vatican guesthouse rather than the apostolic palace. He stressed that all bishops should also live simply and humbly, and the pontiff has continually exhorted pastors to “have the smell of the sheep,” staying close to those most in need and being welcoming and inclusive at every turn.

“His program is to a high degree what the Catacomb Pact was,” Cardinal Walter Kasper, a retired German theologian who is close to the pope, said in an interview earlier this year at his apartment next to the Vatican. 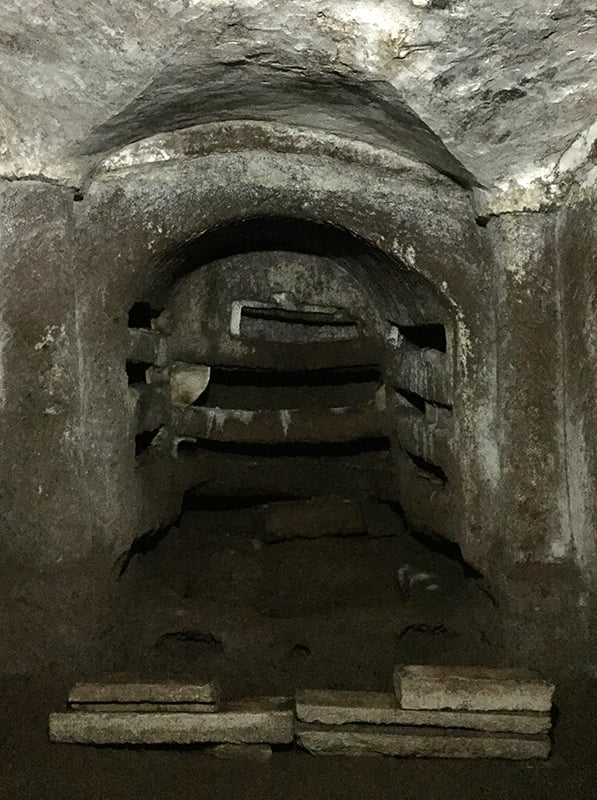 A view inside the Catacombs of St. Domitilla in Rome. Religion News Service photo by Grant Gallicho

The Pact of the Catacombs “was forgotten,” said Kasper, who mentioned the document in his recent book on the thought and theology of Francis. “But now he (Francis) brings it back.”

For a while there was even talk in Rome that Francis would travel to the Domitilla Catacombs to mark the anniversary. While that’s apparently not in the cards, “the Catacomb Pact is everywhere now in discussion,” as Kasper put it.

“With Pope Francis, you cannot ignore the Catacomb Pact,” agreed Massimo Faggioli, a professor of church history at the University of St. Thomas in St. Paul, Minn. “It’s a key to understanding him, so it’s no mystery that it has come back to us today.”

But why did the Pact of the Catacombs disappear in the first place?

In reality it didn’t, at least for the church in Latin America.

The chief presider at the catacombs Mass 50 years ago was a Belgian bishop, Charles-Marie Himmer, and a number of other progressive Europeans took part as well. But the bulk of the celebrants were Latin American prelates, such as the famous Brazilian archbishop and champion of the poor, Dom Helder Camara, who kept the spirit of the Catacombs Pact alive — as best they could.

The problem was that the social upheavals of 1968, plus the drama of the Cold War against communism and the rise of liberation theology — which stressed the gospel’s priority on the poor, but was seen as too close too Marxism by its conservative foes — made a document such as the Catacombs Pact radioactive.

“It had the odor of communism,” said Brother Uwe Heisterhoff, a member of the Society of the Divine Word, the missionary community that is in charge of the Domitilla Catacombs.

Even in Latin America the pact wasn’t publicized too widely, lest it poison other efforts to promote justice for the poor. Heisterhoff noted that he worked with the indigenous peoples of Bolivia for 15 years but only learned about the Catacombs Pact when he came to Rome to oversee the Domitilla Catacombs four years ago.

“This stuff was a bit dangerous until Francis came along,” said Faggioli.

Indeed, some reports say that up to 500 bishops, mainly Latin Americans, eventually added their names to the pact, and one of them, Salvadoran Archbishop Oscar Romero, was gunned down by military-backed assassins for speaking out against human rights abuses and on behalf of the poor — in the view of many, for preaching the message of the Catacombs Pact.

Francis, too, seems to have imbibed the spirit of the Catacombs Pact, though there’s no evidence he ever signed it.

As a Jesuit priest and then bishop in Argentina during the turbulent decades of the 1970s and ’80s, Francis became increasingly devoted to the cause of the poor, as did much of the Latin American church. It was no great surprise, then, that this year he pushed ahead with the beatification of Romero, which had been stalled for decades; just last week Francis used remarkably sharp language to denounce those who had “slandered” Romero’s reputation. 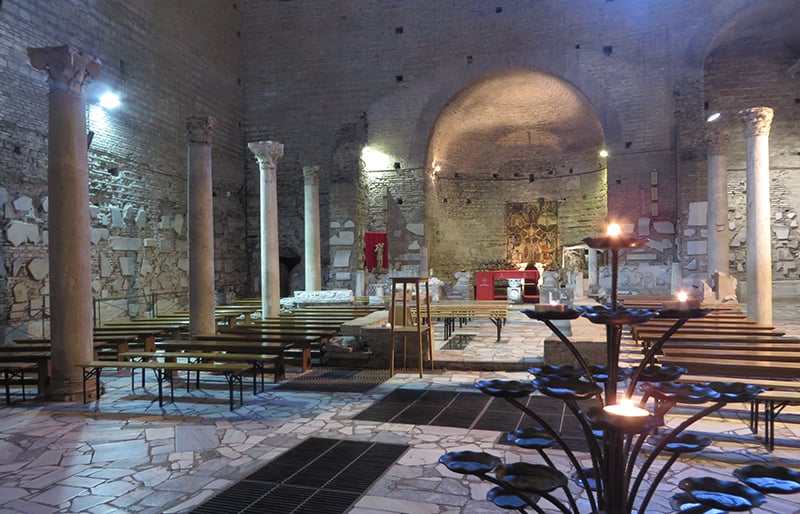 Basilica of Sts. Nereus and Achilleus, an underground altar where the Catacombs Pact was signed at a Mass on Nov. 16, 1965. Religion News Service photo by Grant Gallicho

Francis was also familiar with the case of his fellow Argentine churchman Bishop Enrique Angelelli, an outspoken advocate for the poor who was killed in 1976 in what appeared to be a traffic accident but which was later shown to be an assassination by the military dictatorship that ruled the country at the time.

Angelelli was also a signer of the Catacombs Pact, and Francis last April approved a process that could lead to sainthood for the slain bishop.

For many in the U.S., on the other hand, the catacombs have chiefly been deployed as a symbol of persecution, and often by conservative apologists who argue that secularizing trends are heralding a return to the days when Christians huddled in the tunnels for fear of the Romans.

Heisterhoff smiles at that notion. “Here in the catacombs, it was not a place to hide,” he explained. “It was a place to pray, not so much a refuge.”

That’s a point Francis himself has made — the Roman authorities knew where the catacombs, and the Christians, were. It was no secret hideaway. The catacombs even grew as a place to bury the dead after the empire legalized Christianity in 313, as believers came to honor and pray for them in the hope of the resurrection.

What the catacombs really represented, Heisterhoff said, was “a church without power,” a church that featured what Francis has praised as a “convincing witness” — a radical vision of simplicity and service that the pope says is needed for today’s church.

So has the Pact of the Catacombs — and the true message of the catacombs themselves — re-emerged for good?

Much may depend on how long Francis, who turns 79 in December, remains pope and can promote his vision of a “church for the poor.”

Moreover, the economic message at the heart of the Catacombs Pact is just as controversial today as it was when it was signed 50 years ago. Capitalism may have won the Cold War over communism, but income inequality and economic injustice remain, or are worse than before.

“We cannot absolutize our Western system,” Kasper said in explaining the theme of the Catacombs Pact. “It’s a system that creates so much poverty, that’s not just. The resources of the world belong to everyone. To all mankind. That is what it is saying.”

News
Paris archbishop who had ‘ambiguous’ relationship resigns
Follow us on Facebook!
Submit your photos to RNS