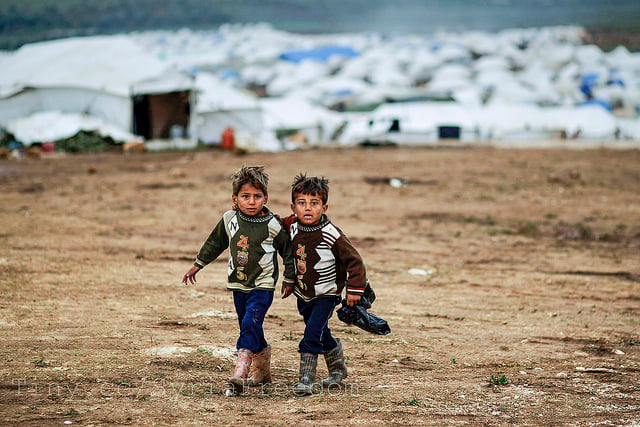 In light of Friday's terrorist attacks in Paris, a number of US governors have chosen to close their doors to Syrian refugees. The logical inconsistency of this decision baffles the mind; consider, for instance, that the two masterminds of the attacks were a French national and a Belgian national. Consider also that there are so many Syrian refugees (3 million at last count, not including the 6.5 million who are displaced within Syria) precisely because they are trying to escape the kind of horrific violence that was perpetrated in Paris last week. Consider, finally, that many of the governors of these states that are banning Syrian refugees have spoken publicly about their Christian faith. This would be a good time for them to turn to their Bibles for guidance:

I just signed an Executive Order instructing state agencies to take all available steps to stop the relocation of Syrian refugees to LA.

"As Christians, we're secure in the knowledge that in the Book of Life, our God wins," Jindal told Christianity Today. He gets off that cross. He beats Satan. We're not called to be despondent. We are called to be salt and light and to be planting the seeds of the gospel."

If @SpeakerRyan will not lead & reject the importation of those fleeing the Middle East he needs to step down today & let someone else lead.

My letter to @POTUS: Texas WILL NOT accept any Syrian refugees in the wake of the Paris attacks. https://t.co/GOALpfBD3X

“I believe that we’ve seen challenges to the recognition of God in our country as much in the past decade as we’ve seen in the preceding 100 years,” Abbott told the San Angelo Standard-Times. “I think God’s influence on our country is threatened like we have never seen before.”

In wake of Paris attacks, I'm directing all state agencies to suspend the resettlement of addl Syrian refugees in IN https://t.co/Gtg5ccjMsU

"For me it all begins with faith," Pence said to CBN News. "It begins with what matters most and I try and put what I believe to be moral truth first, my philosophy of government second, and my politics third."

The list could go on. These men in positions of power have all professed their faith in the Christian God, and have all chosen to close their borders to refugees fleeing deadly violence in one of the most turbulent places on earth. Syrian refugees need the aid and shelter of the global community, and Christians should be the first to answer the call for hospitality. There are so many passages in the Bible that tell us so:

Syrian boys whose families fled their home in Idlib | Photo by Freedom House via Flickr (http://bit.ly/1MxGS1Z)

"You shall also love the stranger, for you were strangers in the land of Egypt." -- Deuteronomy 10:19

"Religion that is pure and undefiled before God, the Father, is this: to care for orphans and widows in their distress, and to keep oneself unstained by the world." -- James 1:27

"Contribute to the needs of the saints; extend hospitality to strangers." -- Romans 12:13

"When an alien resides with you in your land, you shall not oppress the alien. The alien who resides with you shall be to you as the citizen among you; you shall love the alien as yourself, for you were aliens in the land of Egypt: I am the Lord your God." -- Leviticus 19:33-34

We aren't a Christian nation, so we don't need to look at the Bible as if it were our Constitution. But when these politicians all claim to be Christians and enact policies based on their faith, but turn around and so clearly ignore other parts of Scripture, they ought to be held to account. People's lives are at stake, and we are to welcome them in with love and hospitality.