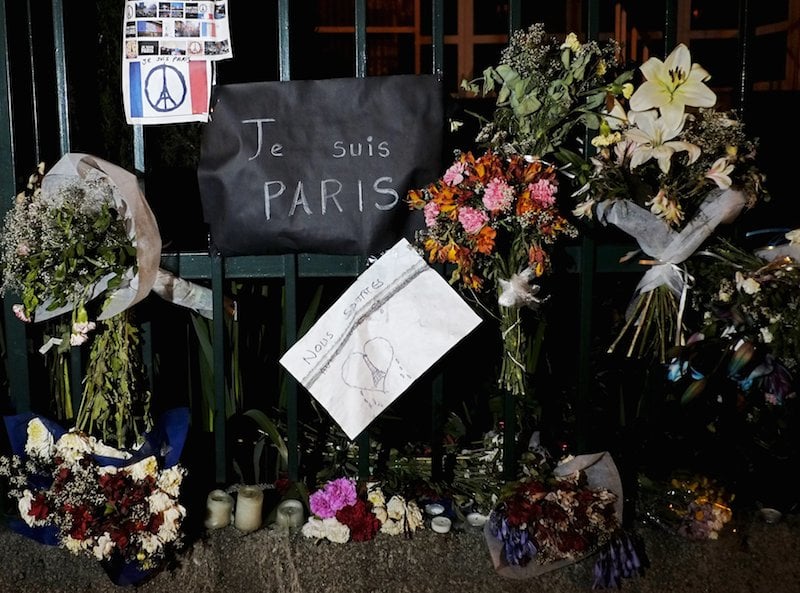 Flowers and banners are pictured, as a tribute to the victims of Paris attacks at the gate of French Embassy in La Paz, Bolivia, on Nov. 18, 2015. Photo by David Mercado, courtesy of Reuters

PARIS (Reuters) — Among the dead in last week’s Paris attacks were two sisters celebrating a birthday, a promising architect, a talented musician and a woman shot while out doing some late shopping.

What they had in common was that they were Muslims killed in the random slaughter carried out by Islamic State.

Most victims of violence by Islamic State and other jihadist groups are Muslims, since they fight mostly in majority Muslim countries and often attack less radical Islamic communities such as Shi’ites and Sufis that they consider to be heretics.

Islamic State — widely known in Arabic as Daesh — claimed responsibility for the attack against “Crusader France,” implying all French are Christians. With Islam the second largest faith in Europe, a massacre there is very likely to include some Muslims among the victims.

“Daesh has been killing Muslims by the thousands for years in Africa and the Middle East,” said Yasser Louati, spokesman for the Collective against Islamophobia in France.

“Now they’re killing Muslims here in France,” he said. “The word ‘Islamic’ in their name is only a pretext for their ideology. Look at the series of attacks they’ve made. There’s no end.”

France’s Muslim minority, the European Union’s largest, makes up about eight percent of the population. Judging from published lists of the 129 dead after Friday’s carnage, about six per cent have been identified by family and friends as Muslims or people with ethnic origins in majority Muslim countries.

Halima and Hodda Saadi were two sisters of Tunisian origin celebrating a friend’s birthday at La Belle Equipe cafe where their brother Khaled worked. Halima, mother of two children, was 37 and Hodda 35.

Seated outside on the terrace, they were among 19 victims who died in the attack there. Khaled said the attackers “arrived in a rush and fired at everybody on the terrace. They killed everybody, including my sisters,” he told iTele television.

Abdallah, another brother, said: “We’re just citizens like everyone else, who love our family and love people. … We’re eight brothers and sisters, and now we’re six.”

Another victim at the same cafe was Djamila Houd, 41, a daughter of Algerian immigrants who worked in a fashion shop.

Amine Ibnolmobarak, 29, was an architect who grew up in Morocco and came to France to study. “His parents sent him to Bordeaux to study medicine, but he slipped away to Paris to study architecture and we noticed him right away,” his former professor Marc Armengaud wrote in a tribute to him.

Some websites listing victims include a YouTube video of Kheireddine Sahbi, 29, playing Arab music. For Barthelemy Jobert, president of Paris-Sorbonne university where he was studying, Sahbi was “a virtuoso Algerian violinist … very active in the university’s traditional music ensemble.”

News about the dead came in various ways. A man in California reported on Facebook that his cousin Mohamed Amine Benmbarek had been killed in one of the attacks and his wife took three bullets and was in critical condition.

Elif Dogan, adult daughter of a Turkish shopowner in Belgium, stayed behind when the family returned to Turkey and moved to Paris four months ago.

“Terrorism has visited us,” her father Kemal Dogan told Turkey’s Hurriyet newspaper. “While we worried something like this could happen in Turkey, we lost our daughter in one of the leading cities of the world.”

Lassana Diarra, a French international footballer of Malian origin who was playing at the Stade de France when the attacks started there, announced on his Facebook page that his cousin Asta Diakite was killed in an attack in the city.

He asked his French supporters to “stay united in the face of a horror that knows neither color nor religion.”

Opinion
Why Ramadan is called Ramadan: 6 questions answered
Follow us on Facebook!
Submit your photos to RNS