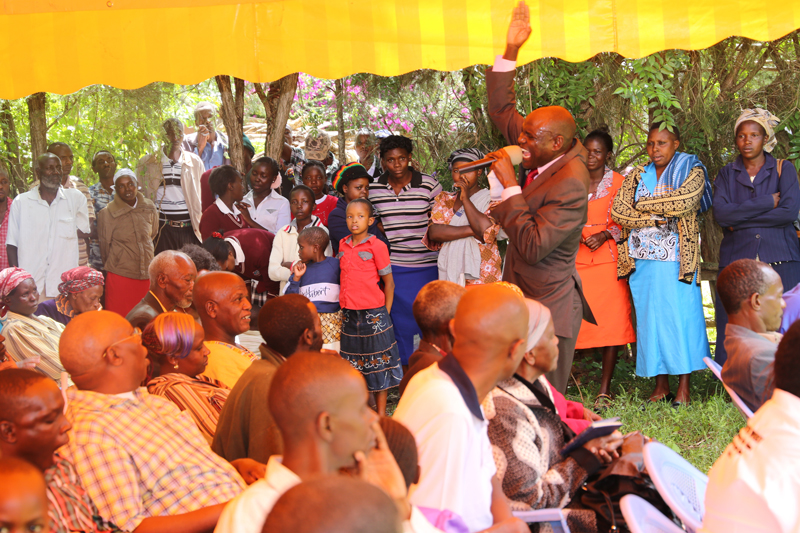 Priests and residents in Uganda, in the capital of Kampala, are warming up to petition Pope Francis to allow priests to marry. Maintaining clerical celibacy is a problem especially in Africa, which has the world’s fastest-growing Catholic population. Religion News Service photo by Tonny Onyulo

KAMPALA, Uganda (RNS) Throngs of Roman Catholics are expected to greet Pope Francis when he visits East Africa this week.

But the Rev. Anthony Musaala won’t be a part of the official welcoming delegation.

Two years ago, Ugandan Archbishop Cyprian Lwanga suspended Musaala indefinitely — barring him from administering the sacraments — when Musaala wrote an open letter that challenged his priestly vows of celibacy, condemned sexual abusers among the clergy and criticized priests who father children and abandon them.

Lwanga said the letter “damages the good morals of the Catholic believers and faults the church’s teaching.”

Since then, the priest, a popular gospel singer and LGBT activist, has become a champion of efforts in Uganda to overturn church celibacy rules and oppose anti-gay laws.

“We will ensure the pope hears our voices on the issues of celibacy,” said Musaala.

He and other like-minded Catholics plan to deliver a petition calling on the pope to let priests marry when he travels to Kenya, Uganda and the Central African Republican Nov. 25-30. In a society that places a high value on marriage and childbearing, thousands are expected to sign on.

“They should be allowed to enjoy companionship and receive the sacraments like others,” said Charles Namang’are, a senior catechist, or religious teacher, at a recent event among petition organizers at the Uganda Martyrs Shrine in Namugongo, referring to priests. “We are all equal before God.”

Musaala and his supporters pushed unsuccessfully for repeal of Uganda’s infamous 2013 “Kill the Gays” law, which called for life sentences for “aggravated homosexuality” and seven-year prison terms for the promotion of homosexuality. The country’s constitutional court overturned the law last year on technical grounds. Ugandan lawmakers are now considering new legislation.

The petition drive advocating marriage for priests comes as the Ugandan Catholic Church has been cracking down on Musaala and his fellow activists. Last month, Lwanga suspended several other priests for suggesting that Catholic priests should marry.

By denying priests permission to marry, the church is rejecting thousands of young men who otherwise would heed the call to holy orders in Africa, home of the world’s fastest-growing Catholic population, Musaala is convinced. Meanwhile, he added, numerous Ugandan priests now live openly with wives and families anyway.

“Father Anthony Musaala’s suspension was because he was saying what the rest couldn’t say,”  said Namang’are. “He was courageous enough to break the silence and tell the world the truth. We’ll not go and kneel down and say sorry to the archbishop because this is not a sin.”

At the shrine in Namugongo, where Francis is slated to address around 1,000 lay Catholics on his visit to Uganda, Vincent Ogalo elicited cheers as he spoke before a crowd of petition supporters.

“I prefer priests to marry to avoid cases of adultery in our churches,” he said. “My wife was snatched by one of the local priests after having stayed together in marriage for five years.”

READ: Why imprisoned pastor’s wife kept her marital abuse a secret — until now

“We have always trusted them with our wives and daughters, who usually help them with various work in churches,” added Ogalo. “They’re not good people if allowed to stay without marrying. They are a threat to us.”

A woman in the audience shouted in response.

“If they need me to marry them, I will accept,” she said. “These priests have money minus wives, and they like women.”

Catholics in Africa hold on to traditional societal values that are at odds with some church doctrines, said Zacharia Wanakacha Samita, of the department of philosophy and religious studies at Kenyatta University in Nairobi, Kenya.

“People who choose not to marry, whether for religious reasons, as celibacy in the Catholic Church, or other practical reasons, do not easily find social acceptability in African society, largely because marriage and having children remains a core value,” he said.

Some Ugandan Catholics have condemned the petitioners.

“We do not want to be embarrassed during the pope’s visit,” said the Rev. Jeffrey Rhuweza, who is based in Kampala. “Those who wish to marry should be silently allowed to step down as priests so that the revered practice of celibacy is sustained. Whoever wants to tie the knot should get out of priesthood. We need no politics in churches.”

But this is not stopping hundreds of Catholic protesters across the country from going ahead with their plan of petitioning Francis to allow priests to marry.

“Many have been afraid to come out and speak, for fear of discrimination,” said Ogalo. “We will demonstrate throughout the streets during the pope’s visit if he doesn’t allow them to have wives.”