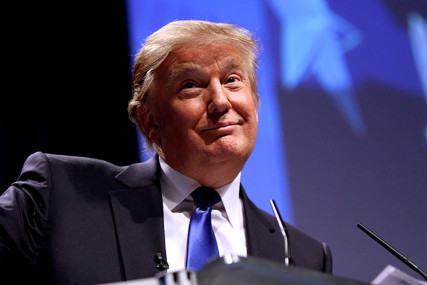 Donald Trump speaking at CPAC in Washington D.C. on February 10, 2011.

WASHINGTON, April 30, 2017–It has been an extraordinary first one hundred days for new President Donald Trump. His actions on the national security front are making headlines around the world.

In his first act upon assuming office, President Trump declared a national State of Emergency. In his address to the nation, President Trump offered four primary reasons for this step: the continued threat posed by the terrorist group ISIS, the possibility of ISIS collaborators within the American Muslim community, the presence within the United States of at least eleven million illegal immigrants, and insecure air, land, and sea borders.

President Trump undertook a large number of specific policy changes by executive order. He first ended the program which had permitted refugees from Syria entry into the United States, and announced efforts to locate and deport all such refugees. The president also announced a temporary but indefinite hold on the admitting of any immigrants of any type to the United States.

The president then announced a national registration campaign. Claiming that national security required that the government have full knowledge of all persons in the country, and of all information relevant to security, President Trump announced the Make America Great Identity Card, to be called the MAGIC card. As of March 1, every person within the United States was required to register their identity, workplace, address, national origin, and religious affiliation. All people on US soil are now required to produce this identity card to any officer of the law upon request. Those unable to produce a card are taken into custody and subject to deportation.

The president also announced a program to locate and deport illegal immigrants. Besides the use of the MAGIC card, the president announced his intention to step up enforcement of US immigration law using whatever means might be necessary to locate and deport illegal immigrants. Raids on predominantly Hispanic population centers began on March 1. Meanwhile, President Trump has stationed National Guard troops along the borders, and at airports and seaports.

Following quickly on the heels of these measures, President Trump announced the opening of temporary camps for processing and holding those arrested either for lack of a MAGIC card or in immigration raids. Naming these the Make America Great Internment Centers, or MAGIC2, the president claimed that these are a necessary but short-term measure under the state of emergency. A number of MAGIC2 sites have already been established and more are under construction.

Claiming that then-existing federal, state, and local law enforcement resources were inadequate to meet current challenges and enforce new policies, President Trump announced the creation of a new internal security force, based in the White House and reporting directly to the president. The president announced that it would have priority for law enforcement resources and its actions would not be subject to judicial review. At the same time, President Trump announced that he had overturned former President Obama’s 2009 executive order banning waterboarding and other forms of “enhanced interrogation,” sometimes considered to be torture, and authorized the use of this and other interrogation techniques during the State of Emergency.

As a candidate, Mr. Trump had suggested many of these steps as early as 2015 and had met considerable opposition. However, the devastating terror attack on Los Angeles in October 2016 seems to have helped ensure his election as an independent in a very tight three-way race against Hillary Clinton and Marco Rubio, while stilling many voices of dissent.

Since taking office, President Trump, unexpectedly, has found his most determined opponents to be religious groups. Besides protesting his new policies, some religious leaders have instructed their congregants to refuse to register under the MAGIC card system. Under the #WeAreAllMuslims initiative, other religious leaders have called for everyone to register as Muslim, in order to support the group believed to be most directly threatened by potential follow-on steps to registration. And many religious groups have begun hiding undocumented immigrants from raids.

In response, the president has heightened penalties for noncooperation. Several hundred US religious leaders have been detained and many more are expected to be jailed for continued open defiance of the new laws. A large number of other US religious leaders have backed the president and expressed opposition to religious dissidents, claiming that they are being unpatriotic and are threatening national security. Fistfights have been reported in several congregations around the nation, and several ministers have reported death threats.

Unlike in France after the Paris attacks of November 2015, no time limit has been set on the US State of Emergency. It is possible that it will continue indefinitely.