David Gushee in his office at Mercer University in Atlanta. Photo by Alice Horner.

EDITORS’ NOTE: As the year draws to a close, it’s a time of reflection. This week, Religion News Service is proud to highlight several top stories by our staff and columnists, including this September column by David Gushee, president of the American Academy of Religion.

RNS) — This is my final column for Religion News Service, marking my voluntary departure from what used to be called “opinion writing” and what today is called the blogosphere. Here’s why:

my new memoir, “Still Christian,” which I drafted last summer but is just now out, I wrote:

I am fifty-five years old, but that’s about eighty in culture-wars years. There are twenty-four years of fights in those fifty-five years. I am asking God if I might be released from the responsibility of continuing to fight on these battlefields. I have wondered if my vocation might be able to be expressed in some other ways.

Any joy I once had in writing a column about “Christians, Conflict and Change,” in order to analyze and take stands on various culture-wars issues, has eroded.

After all, there are only so many interesting ways to say what we all know — American Christians are as hopelessly divided as the rest of American culture, these conflicts are rooted in fundamentally different perspectives on the massive social changes that have taken place in our country since the 1960s, and there is little evidence that the fight will end anytime soon.

This capitulation to America’s “red” and “blue,” and the vicious conflict between them, marks a profound failure of American Christianity, reflecting weaknesses in our identity and theology that require serious reflection.

Perhaps voices will emerge that will enable us to find new ways forward together, past the screaming and the litigation, through a return to deeper theological and ecclesial wellsprings. I pray that this is so. 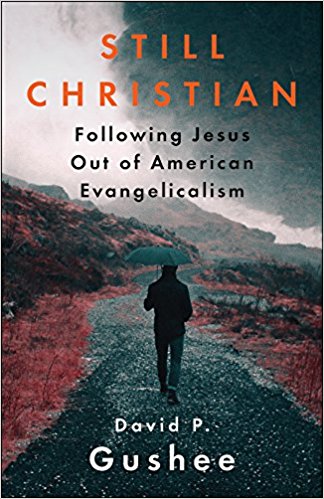 I have spilled considerable virtual ink in these (and other) pages writing about American evangelicalism. My 25-year identification with this community has ended, for reasons I have made clear in these posts and in the memoir.

But again, there are only so many ways to relitigate this issue, and only so much value in doing so. I pray that thoughtful younger evangelical leaders can find a better way forward, and that something creative and compelling can emerge in the post-evangelical landscape.

For myself, I am returning to two prior religious identities: Catholic and Baptist. I grew up Catholic and have returned to Catholic worship with my wife. Meanwhile, in high school, I converted to become a Baptist, and now I lead a Baptist congregation and teach mainly Baptist seminarians. For religious affiliation, that is more than enough.

I first started writing opinion pieces over 30 years ago. One reason I did so was because I was affected by the example of Reinhold Niebuhr, the first Christian ethicist whom I studied very closely. I learned that he tried to do it all, and pretty much did it all — teaching, lecture circuiting, writing serious books, writing popular books, doing political organizing/activism, and penning weekly opinion pieces. I embraced the Niebuhr paradigm for how a Christian ethicist pursues this vocation. I was conscious of doing so.

It was a great ride for Niebuhr, and I enjoyed my version of it. But it has subtle costs, besides the toll on one’s health. The main problem is that each one of the sub-vocations listed in the previous paragraph deserves more focus than is possible when one is trying to do all of them.

Scholarship, in particular, is a unique calling. The scholarly work of Niebuhr, impressive as it was, has not stood up all that well compared to that of other ethicists and theologians who did not try to dash off books between opinion pieces and meetings at the White House.

This is visible by comparing Niebuhr’s work to that of his more focused, less busy brother, H. Richard Niebuhr. Reinhold got the press at the time, but Richard’s work was built to last. Hurry, multitasking, and scholarship do not go well together.

This is what I said about the scholarly life in my memoir:

Now is a good time to return to the time-tested work of the scholarly life: You read, endlessly. You think, slowly. You teach, thoughtfully…if you have something to say, you write, carefully. And everything is tested by peer review. There is a recognized and widely shared understanding of scholarly excellence. How refreshingly old-school. It’s positively medieval.

So farewell: to the peripatetic Niebuhrian paradigm for pursuing a public career in Christian ethics; to the fights over and within evangelicalism; to the culture wars; to the blogosphere. And hello again, to this vocation:

I feel drawn simply to be a disciple of Jesus, a family man, a pastor, a scholar, and a teacher.

It is more than enough.