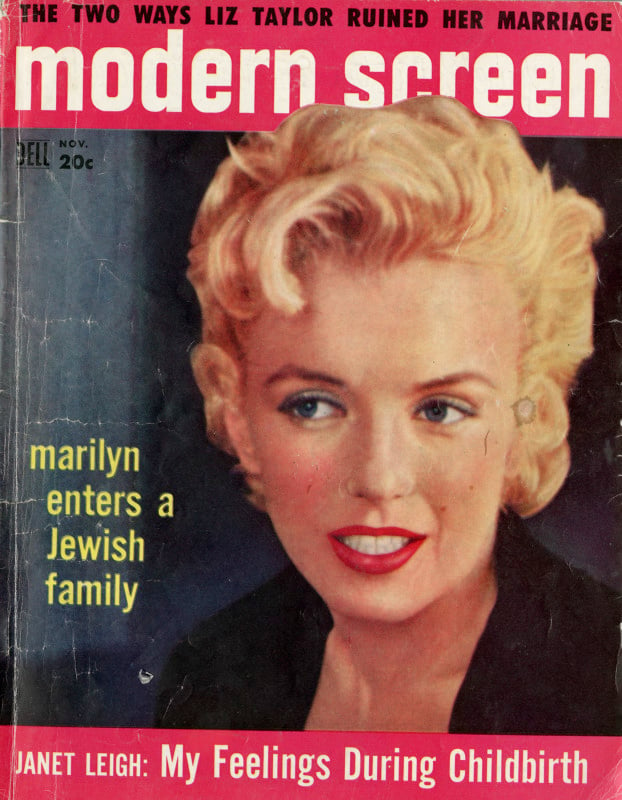 Marilyn Monroe on the cover of Modern
Screen, November 1956. Courtesy of The Jewish Museum.

Wait, America’s most iconic blond bombshell and the star of “National Velvet” were Jewish?

Seriously Jewish. Both stars made heartfelt conversions to Judaism in the 1950s, and not just because they married Jewish men, a new exhibit at the Jewish Museum in New York makes clear.

Collecting letters from their rabbis, images from their Jewish weddings, and a rarely-heard audio recording of Taylor’s conversion ceremony, “Becoming Jewish,” documents the relatively quiet way in which Monroe and Taylor adopted the faith, and what that said about the America that loved them.

“These were women who were so exposed to the world. Everyone was fascinated by them,” said Joanna Montoya Robotham, who curated the exhibit. “This is the part of their lives they kept into themselves. This was just for them.”

But neither movie star hid her new faith. During those waning years of Hollywood’s golden age, pressure to suppress one’s Jewishness had eased, and several other celebrities also publicly converted to Judaism, including Sammy Davis Jr., Carroll Baker and Anne Meara.

Monroe and Taylor may not have considered becoming Jewish themselves had they not fallen for Jewish men. But both came to the decision independent of their husbands, and found strength in different aspects of the faith, Robotham said.

Monroe, whose foster parents espoused a fundamentalist Christianity she did not admire, converted to Judaism in 1956, before her June marriage to playwright Arthur Miller. She studied with Miller’s rabbi, Robert Goldburg, who presided at her conversion and the couple’s marriage. In a letter about Monroe written after her death, a centerpiece of the exhibit, Goldburg recalled their pre-conversion study sessions: 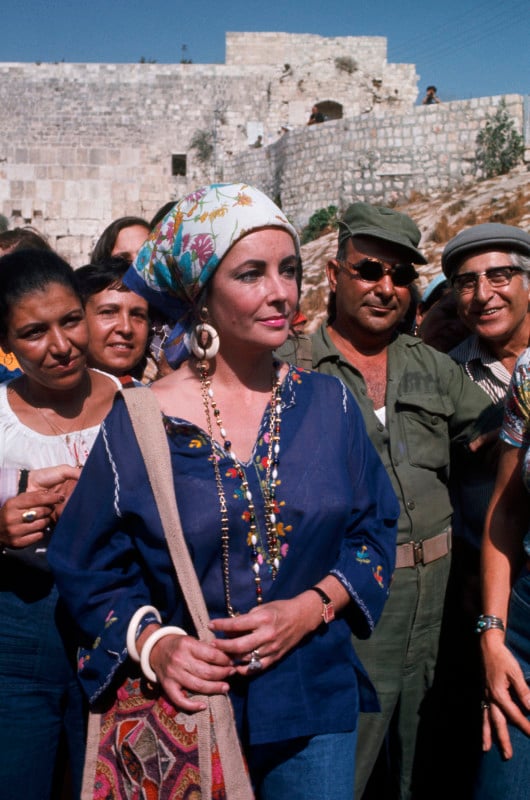 Elizabeth Taylor at Western Wall in 1975 in Jerusalem, Israel — Image by © David Rubinger/CORBIS. Courtesy of The Jewish Museum.

“She indicated that she was impressed with the rationalism of Judaism, its ethical and prophetic ideals and its concept of close family life,” wrote the Reform rabbi. “Marilyn was not an intellectual person but she was sincere in her desire to learn. It was also clear that her ability to concentrate over a long period of time was limited. However I did feel that she understood and accepted the basic principles of Judaism.”

Monroe, whose mother’s severe mental illness made for a rocky childhood, gravitated toward Arthur MIller’s Jewish family. ”She looked toward Judaism as a way to embrace family, to finally have a strong family which she didn’t necessarily have growing up,” Robotham said.

Showcased  in “Becoming Jewish” is Monroe’s brass-plated musical menorah, a conversion present from Miller’s mother. It still plays Israel’s national anthem, and the movie star kept it on her mantle. Although she and Miller divorced in 1961, Monroe told Goldburg that she remained committed to Judaism. 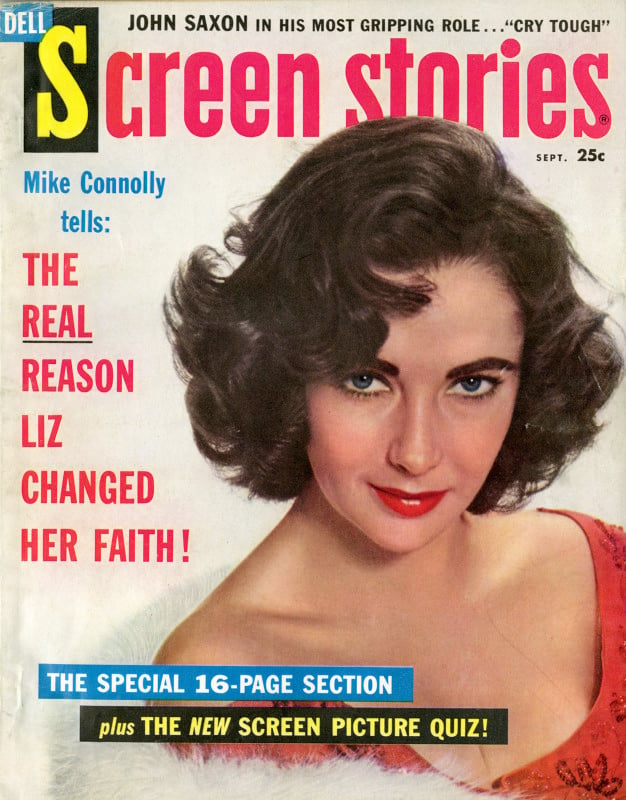 Elizabeth Taylor on the cover of Screen Stories, September 1959. Photo courtesy of The Jewish Museum.

Compared to Monroe, who killed herself in 1962 at age 36, Liz Taylor’s Judaism was better known within the Jewish world. During her lengthy career she worked hard for Jewish charitable causes and on behalf of the new state of Israel, which she visited frequently. Photos in “Becoming Jewish” show her at the Western Wall in Jerusalem, and at a fundraiser for the Jewish National Fund alongside Sammy Davis Jr.

But perhaps the most arresting artifact in the exhibit is two minutes of her distinctive voice, recorded at her conversion ceremony in 1959:

“I, Mrs. Michael Todd, née Elizabeth Taylor,” she begins, “do herewith declare in the presence of God and the witnesses assembled that I, of my own free will, seek the fellowship of the people of Israel and that I fully accept the religion of Israel.”

Of Taylor’s seven husbands, numbers three and four were Jewish: theater and film producer Mike Todd, whose father was an Orthodox rabbi, and singer Eddie Fisher. She had considered converting before marrying Todd, but only began studying with Rabbi Max Nussbaum of Hollywood’s Temple Israel after Todd’s death in a plane crash.

“She found solace in the words of Rabbi Nussbaum and from Temple Israel,” Robotham said. “It grounded her. It helped her find happiness again.” Taylor became a Jew in 1959, after about nine months of study with Nussbaum, who presided at her wedding to Fisher later that year.

The subtitle of “Becoming Jewish” is “Warhol’s Liz and Marilyn,” referring to Andy Warhol, the pop artist whose famed portraits of both women, in bold, unnatural colors, are juxtaposed next to the documents, photos and videos that chronicle the stars’ conversions. The Warhol portraits, which speak to the commodification of celebrities, show nothing of the women’s Jewishness. He depicted the public Monroe and Taylor. The Jewish sections of the exhibit show their private sides.

Rabbi Jason Miller, who writes about Jewish celebrities for the “Pop Jewish” blog, wonders how private Monroe and Taylor could have kept their faith lives had they converted today, given the non-stop stream of news on the famous. Recently actress Drew Barrymore has hinted that she might become Jewish. ”Just mentioning that she’s considering it — it already makes headlines,” he said.

Taylor had a Jewish burial when she died in 2011. After Monroe’s sudden death, former husband Joe DiMaggio arranged her funeral, inviting her foster parents and few others. A Lutheran minister presided.

“Becoming Jewish” is at the Jewish Museum until February 7.