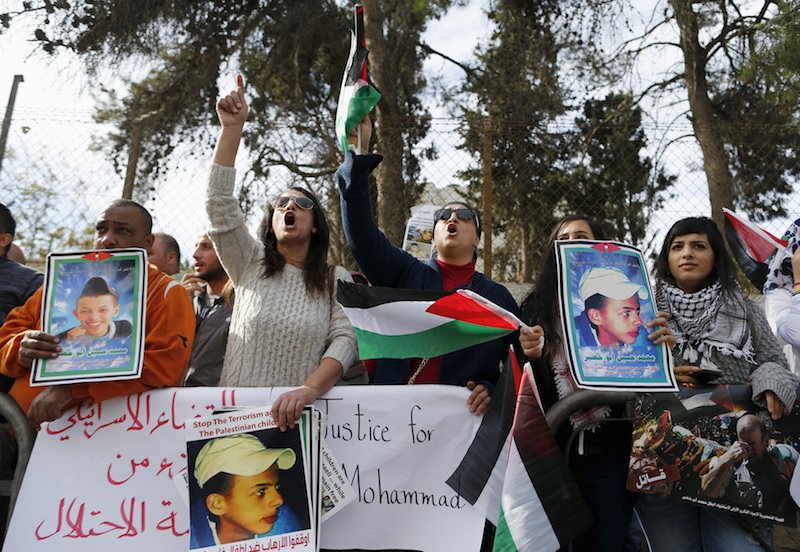 JERUSALEM, Nov 30 (Reuters) – Two Jewish minors were found guilty on Monday of the 2014 murder of a Palestinian teenager in Jerusalem, but the Israeli court held off on formally convicting a third man accused of orchestrating the crime, pending a psychological review.

Prosecutors said the three had confessed to abducting, bludgeoning, strangling and burning Mohammed Abu Khudair, 16, in revenge for the killing days earlier of three Israeli youths by Hamas militants in the occupied West Bank.

The incidents touched off a wave of bloodshed culminating in the seven-week Gaza war.

The verdicts, and eventual sentencing, could stoke tensions that are already high over access to a major Jerusalem mosque complex that Jews revere as vestige of their two ancient temples.

Jerusalem District Court ruled that the two underaged defendants, whose names were withheld from publication, carried out the crime. Under Israeli law, minors cannot technically be convicted before a review board endorses the verdict.

Yosef Haim Ben-David, a West Bank settler who works as a Jerusalem optician and who confessed to leading the crime, was also found guilty. But the court deferred formal conviction over his lawyers’ 11th-hour request for a psychological evaluation.

Abu Khudair’s family, fellow Palestinians and Israeli Arabs decried the delay as a miscarriage of justice.

“How can the defendant, two days ago, a year and a half after the crime, bring a document claiming insanity?” the youth’s father, Hussein Abu Khudair, told reporters. “It’s all lies and I worry that the court will free them in the end.”

Ayman Odeh, a senior lawmaker from Israel’s Arab minority, said: “The state is sending a clear message of forgiveness and understanding when it comes to Jewish terror.”

While adult murder convicts generally get lengthy jail terms in Israel, comparable sentences are not mandatory for minors. Court spokesmen did not immediately give dates for the defendants’ review hearings or sentencing.

Israeli officials welcomed Monday’s verdict as a warning against hate crimes, which have surged as repeated bouts of violence eclipse peace talks with the Palestinians deadlocked since early 2014.

“The court determined unequivocally today that the three defendants committed the barbaric crime of abducting an innocent person only because of his origin, and burning him alive,” said state prosecutor Uri Korb, vowing to contest any insanity plea.