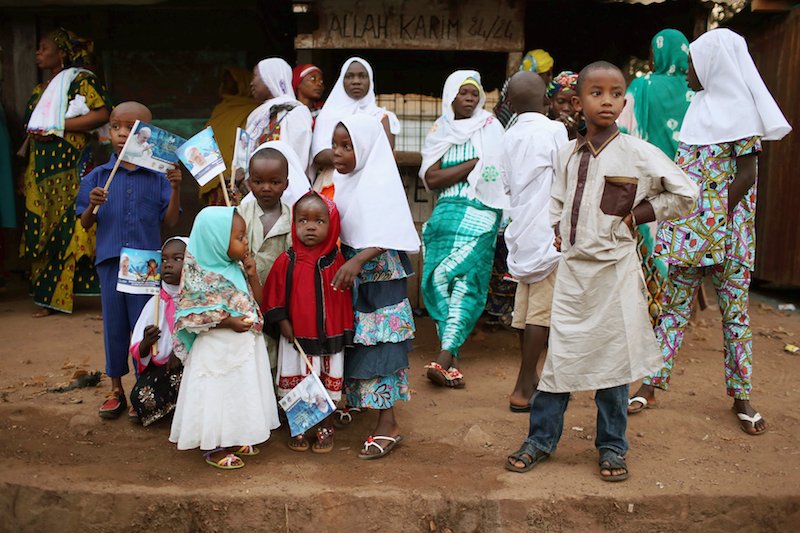 Children await for the arrival of Pope Francis at the central mosque, in the mostly Muslim PK 5 neighbourhood of the capital Bangui, Central African Republic, November 30, 2015. REUTERS/Siegfried Modola

BANGUI (Reuters) – Pope Francis ventured into one of the world’s most dangerous neighborhoods on Monday to implore Christians and Muslims to end a spiral of hate, vendetta and bloodshed that has killed thousands over the past three years and divided a nation.

Ending his three-nation Africa tour under intense security, Francis passed through a no-man’s zone to enter PK5, a district where most Muslims who have not fled Central African Republic’s capital Bangui have now sought refuge. He later celebrated Mass in the national stadium before flying back to Rome.

The PK5 neighbourhood has been cut off from the rest of the city for the past two months by a ring of so-called anti-balaka Christian militias, who block supplies from entering and Muslims from leaving.

A heavy deployment of United Nations peacekeepers with rifles and bullet-proof vests was present throughout PK5 and armoured vehicles mounted with machineguns were positioned along the route of Pope Francis’ motorcade.

U.N. sharpshooters looked out from the tops of the minarets crowning the freshly repainted green and white mosque, where hundreds of PK5’s Muslims listened as Francis made an impassioned appeal for an end to the violence.

“Christians and Muslims are brothers and sisters,” he said after a speech by Imam Tidiani Moussa Naibi, one of the local religious leaders trying to foster dialogue.

“Those who claim to believe in God must also be men and women of peace,” he said, noting that Christians, Muslims and followers of traditional religions had lived together in peace for many years.

He appealed for “an end to every act which, from whatever side, disfigures the face of God and whose ultimate aim is to defend particular interests by any and all means.”

Central African Republic descended into chaos in early 2013 when mainly Muslim Seleka rebels seized power in the majority Christian country, sparking reprisals from Christian militias. Leaders from both sides say the hatred has been manipulated for political gain.

Healing rifts between Christian and Muslim communities has been a theme throughout Francis’ first visit to the continent, which has also taken him to Kenya and Uganda.

However, nowhere is his call for peace and reconciliation more pressing than in Central African Republic, where thousands have died and hundreds of thousands have been displaced in clashes that have split the country along religious lines.

“Together, we must say no to hatred, to revenge and to violence, particularly that violence which is perpetrated in the name of a religion or of God himself. God is peace, ‘salaam,'” the pope said, using the Arabic word for peace.

Unprecedented security measures have been laid on for the pontiff’s two-day visit to the former French colony, which took place amid a surge in violence.

In addition to around 500 national police and gendarmes, Central African Republic’s United Nations peacekeeping mission brought in additional forces and deployed over 3,000 soldiers in an attempt to secure the city during the pope‘s visit. French troops based in Bangui were also on alert.

Tit-for-tat killings in and around the tiny PK5 enclave have claimed at least 100 lives since late September, according to Human Rights Watch.

Imam Naibi has called PK5 “an open-air prison”, but on Monday he struck a optimistic tone.

“The relationship between our Christian brothers and sisters and ourselves is so deep that no maneuver seeking to undermine it will succeed,” he told the pope.

“The Christians and Muslims of this country are obliged to live together and love each other.”

Both Christians and Muslims have welcomed the pope‘s visit, hoping he can spur renewed dialogue and help restore peace.

Thousands of Muslims lined the roads of PK5 to get a glimpse of the pontiff, and a group of young Muslims in cars and motorbikes ventured out of the enclave, following the pope‘s motorcade as it headed to the national stadium.

There, Francis was greeted by believers who packed into its 20,000 seats or onto the soccer pitch, dancing and singing.

After celebrating a final Mass before the cheering crowd, the pope took a lap around the stadium in the back of a modified Toyota pick-up before heading to the airport and flying back to Rome.