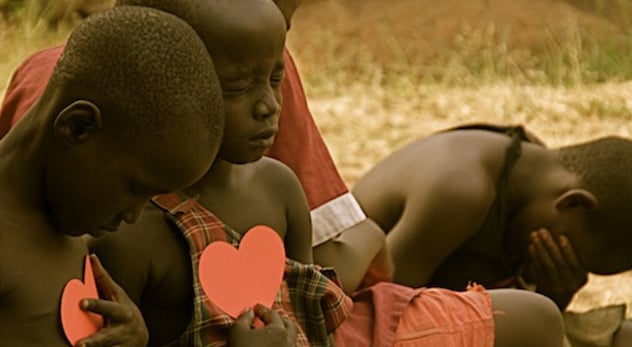 Since at least 1951, Thanksgiving has been followed by a nasty little monster named "Black Friday." In recent years, however, that leech has grown into family of consumeristic devils who pick-pocket the masses of Americans looking for a steal. There's his slightly nobler brother, Small Business Saturday, and his tech-savvy daughter, Cyber Monday. You may also know of his more benevolent cousin, Giving Tuesday, who encourages giving gifts to worthy organizations.

On this Charitable Tuesday, I want to highlight the amazing Exile International. They are working to help the estimated 300,000 child soliders trapped in global conflicts. Here I talk to their founder, Bethany Haley Williams, about their amazing work and her book, The Color of Grace: How One Woman Brought Healing and Hope to Child Survivors of War.

RNS: Many people who follow the news cycle have probably heard about child soldiers being recruited to fight wars. How widespread and serious is this problem, globally?

BHW: It is estimated that 300,000 children – boys and girls under the age of 18 – are currently involved in more than 30 conflicts in the world. In Central and East Africa, armed forces and rebels have abducted more than 100,000 children. Children as young as 7 are kidnapped and forced to fight in rebel armies. Many are psychologically tortured and brainwashed — forced to kill and commit atrocities against their own families and communities. Young girls are abducted and abused, becoming victims of rape and sexual violence.

If these children finally escape or are released, they are left with deep and lasting emotional scars from what they’ve seen and been forced to do. Many are unable to return home because they have lost all family members and/or because of stigmatization for atrocities they were forced to commit in their communities.

RNS: Children are more vulnerable and formative than adults. How does this impact the ways in which they are uniquely affected by traumatic events?

BHW: Young children are the most vulnerable in the world, as they are dependent on adults and their community for safety and wellbeing. They are the lost ones in the world’s wars. Many of the children in Exile International’s programs where forced to kill family members as a form of brainwashing. If they are able to return to their villages, they are often rejected. This means they are often forced to care for themselves and their younger siblings alone, even at the age of 10 and 12 years old.

In many conflict zones, children account for the majority of the casualties. Children die not only from being forced to fight as combatants, but from preventable diseases due to damaged health systems or from bombs and bullets. In D.R. Congo, over 2.7 million children have died as a result of the conflict.

RNS: What are some of the psychological problems war-affected children struggle with?

BHW: First, they struggle with a lack of safety. They may often have trouble sleeping for fear of armed military coming at night. In some countries, Post Traumatic Stress Disorder was seen in over 80 percent of rescued child soldiers. When the children are kidnapped, they are often given a gun and taken to a training camp where they are taught to kill. EI’s teammates have heard stories of children too young to carry a gun being placed on the front lines as a human shield. As you can imagine, nightmares and flashbacks are common.

Guilt and shame also carry a heavy emotional weight on these survivors. Rape and sexual violence are increasingly being used as a weapon of war. Many young girls become pregnant and are forced to care for their children at young ages.

RNS: Your organization, Exile International, uses art therapy to help traumatized former child soldiers heal. Explain what this looks like for those who aren't familiar?

BHW: Art and expression are empowering mediums, especially for children — they provide a safe avenue to express and process emotions and experiences that children do not yet have the words to share. Weekly group therapy and programs incorporating art, music, dance and drama provide children with avenues to share their stories. For many, this expression becomes the first step on a path of healing and discovering hope. Communicating their stories with caregivers, mentors and peers helps traumatized children to rebuild a sense of normalcy – the idea that “I can be understood” – once lost to extreme physical and emotional traumas.

RNS: How is your approach uniquely Christian? I mean, would your work look differently if it were being done by an atheist?

BHW: Exile International provides holistic care. This means we focus on healing of mind, body, and spirit - incorporating art and expressive therapy, trauma care, education, food, medical care and peace-building skills. But, most importantly, the children are able to see that they are worthy and valued through the love of Jesus.

Although all of these areas are important, the children experience the greatest change when they begin to believe they are more than their past and that God has plan and a hope for them. Even though they carry deep scars of war, they find redemption by embracing they are a new creation in Christ! It is then they begin to dream about becoming peace leaders in their nations.

RNS: You confronted this problem by going to Uganda and the Congo and founding an organization to help children. Most people can't do this themselves. How can they affect change on this issue in a tangible way, other than just donating money, of course?

BHW: We look at Exile International as a team. Most people in the west would not or could not go into a war zone to work with children in armed conflict, but our teams could not do the work they do without support from our partners and churches. We all have a part to plan in caring for children who have been orphaned and wounded by war.

After being made aware of former children slaves, rescued child soldiers or children orphaned by war – many people are eager to get involved. We always invite people to pray and partner. Our teams and the children in our programs are sometimes in danger, and we have seen the effects of prayer through saving their lives at times.

Partnering looks different from everyone. Of course, that can look like becoming a monthly Restore Partner, Child Sponsor or Church Partner – but we also love for children elsewhere in the world to write letters of encouragement to the children in our programs.